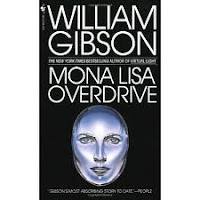 Having established a pattern of publishing a book every two to three years (the exact opposite of Iain Banks, Philip K. Dick, or Charles Stross), it would seem William Gibson spends his time perfecting his prose, paring down the text to a maximum of detail in a paucity of words.   Packed from end to end with impacting sentences which paint vivid pictures of a devolving near-future America,  Mona Lisa Overdrive is no exception.  The third and final novel of Gibson’s Sprawl series is another masterpiece featuring a narrative drive focused like a laser.

Weighing in at a light 312 pages compared to much of sci-fi today (looking at you Hamilton, Stephenson, and Reynolds!), it’s obvious that Gibson believes there’s no need to overwhelm with volume to impress.  Quality rather than quantity, the author truly has his finger on the pulse of the language, the neologisms just waiting to be adopted into lingua franca.  Like triple distilled whiskey, the style can be savored, each word lean and sharp, and the most vivid of near-future dystopias swirling into view.

Beginning roughly seven years after the events of Count Zero, Mona Lisa Overdrive picks up the storylines of some old characters while introducing new ones.  Kumiko is the daughter of a powerful yakuza boss, sent to London to escape Tokyo internecine warfare.  Slick is an ex-con living in the wastelands of a New Jersey landfill, building bizarre robots in an attempt to clear his mind from the chemical brainwash he underwent in prison.  And Mona, a young prostitute, follows Eddy her pimp wherever the drugs take her.  These characters, as well as Angie and Bobby from Count Zero and Molly from Neuromancer, find their lives on a slow collision course that will have all of those jacked in to cyberspace standing at attention.

While there are some shallow fans who consider Neuromancer the only worthwhile offering of Gibson’s oeuvre, readers who appreciate his vision and insight will easily see how this novel advances the series to the next level.  Theme as well as story, Gibson continues to push at boundaries and is rewarded for his effort.  Worthy of notice alone is his ambition to comment upon technology, art, social ills, the environment, and the meaning of being human in a technologically saturated environs.  That he also tells a motivated, paced story filled with highly original ideas moves him to the alpha dogs of the sci-fi pack, no matter the era.  Other than plot threads which may or may not match up in the end, Mona Lisa Overdrive is worth every penny as a satisfying conclusion to what must be considered one of the best sci-fi series out there.

(If you have read the whole Sprawl trilogy and are interested in reading more, you may like to read my essay entitled The Uncertainty of Reality: William Gibson's Sprawl Series.)
Posted by Jesse at 10:04 PM