Review of "A New Science of Life" by Rupert Sheldrake 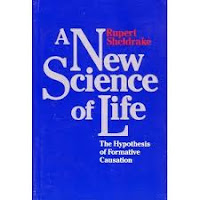 It was Jung who conceived of the collective unconscious and the archetypes embedded universally in humanity, from mythology to psychology.  Synthesizing the results of mechanistic science with an intuitive stance on evolution and the interconnectedness of life, Sheldrake asserts that a similar concept can be found in biology.  In A New Science of Life, the British scientist theorizes that an immeasurable field superimposes and patterns biological structures of life and the reproductive process of all living things.  Despite encountering continued skepticism since its publishing in 1981 (it was nominated as a “book for burning” by Nature), the idea has been developed in subsequent books and achieved wider acclaim and validity in the years since.

The parallels with Jungian archetypal theory obvious - particularly in how it informs across a variety of tiers - Sheldrake describes morphogenetic fields as being:

responsible for the characteristic form and organization of systems at all levels of complexity, not only in the realm of biology, but also in the realms of chemistry and physics.  These fields order the systems with which they are associated by affecting events which… appear to be indeterminate or probabilistic. (13)
It is Sheldrake’s dependence on these unquantifiable aspects—the intuitive, non-rational nature of morphogenetic fields—which cause a stir in the community of evolutionary biology and science in general.

Not the first to use the idea of morphogenetic fields, Sheldrake’s theory is, however, the first to accord the idea unequivocal palpability.  In explaining how current morphogenetic fields are derivative of past fields, he writes “the structures of past systems affect subsequent similar systems by cumulative influence which acts across both space and time” (13).  Similar to Bohm’s theory of implicate order, morphogenetic fields are thus omnipresent and immeasurable, transcending time and space to inform the present.  Based on the cumulative influence contained within morphogenetic fields, Sheldrake thus explains how an animal or a plant is both similar to and different from its predecessor, the newest variety more adapted to its surroundings yet possessing nearly entirely the same structure, the similarities a result of morphic resonance within the omnipresent morphogenetic field.  Rooted in evolutionary biology, he breaks this transfer down into four levels: instinct, sign stimulus (a life form’s interaction and reaction to its environment and circumstance), learning (the manner in which organisms permanently adapt to new environments and perpetual circumstances over time), and memory (the morphogenetic aspect which allows a life form to transmit adaptations to succeeding generations).

In the end, Sheldrake’s theories remain on the dark side of Popper’s demarcation problem: it is unprovable in the terms of rational science.  Sheldrake details some interesting experimentation in his book involving subsequent generations of rats and pigeons taught to perform certain tricks, yet his results are corroborated only to varying degrees by external research.  That being said, rational science is neither able to offer provable explanations for the phenomena Sheldrake delves into, thus rendering his theories at least a step forward in the discovery of what truly lies beneath.  Only time will tell, and so for now A New Science of Life remains interesting, alternative theory worth a read into the yet mysteries details of biological evolution.
Posted by Jesse at 7:20 PM