Review of "Quicksilver" by Neal Stephenson 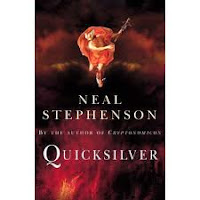 The ideas of numerology, encryption, and early computer infrastructure came to life in Stephenson’s 2001 Cryptonomicon.  Quicksilver – and the entire Baroque Cycle, for that matter – find the author digging even deeper into these histories to strike at the root of modern economy, commerce, and primitive computing.   Tipping the scales at more than 900 pages, the volume is divided into three parts: the eponymous Quicksilver, King of the Vagabonds, and Odalisque.

Centuries in the past rather than decades, the scene is the late 17th century, Britain's Reformation in full swing.  While Protestants and Catholics war in politics and on the streets, a growing number of scientists appear, bent on defining the phenomena of life in less fantastic terms.  Funded and ennobled from on high, a group of these aristocratic nerds form London’s Royal Society for Natural Philosophy and carry out a wide variety of experiments on anything they can lay their hands on, live dogs, menstrual blood, and kidney stones turning no stomachs.  Newton hangs on the fringes, and his, along with Leibniz’s mathematical discoveries, move Europe toward the values of empirical science.

Into this accurate historical setting (which includes many characters who truly lived and breathed), Stephenson weaves a handful of fictional characters.  Foremost is Dr. Daniel Waterhouse, who acts both as witness and participant in the wide variety of social, political, religious, and scientific happenings of the day.  Action occurs elsewhere, as well.  The characters Jack Shaftoe and Eliza de Zeur traipse about mainland Europe (predominantly Germany, the Netherlands, and France), getting into adventures more swashbuckling than Waterhouse’s ecclesiastical circumstances allow for.  Each a window in time, it is through these character’s eyes that the history of the era unfolds as only Stephenson’s wit could allow.

Quicksilver certainly more historical than fictional, the author allows the movements of textbooks to direct the story.  Waterhouse’s perspective is chock full of the political movements and court intrigue of the time, as well as the philosophic and religious disputes that marked the early stages of the modern scientific revolution.  The second and third books, King of the Vagabonds and Odalisque, respectively, contain more action, however.  Jack and Eliza’s turns through silver mines of Bohemia, stock markets of Amsterdam, and squalorous streets of Paris, ratchet the excitement level a little higher and keep the pages turning.

In the end, Stephenson has done his research.  The pages of Quicksilver are bursting with esoteric cultural and historical facts that most modern day people are unaware of.  The origins of words, place names, and former political allegiances will surprise the reader and have them checking up on Stephenson’s facts in a more trusted source.  The fictional characters thrown into the mix liven what would otherwise be dry reading.  Further jazzing up the 900 pages, Stephenson breaks narrative form on several occasions to introduce alternative formats.  Socratic dialogue, letters, theater, and info dumps all bump and jostle the story along.  At times seeming more educational than entertainment, the book is true nerd-dom. Thus, readers who prefer linear, action filled narratives should look elsewhere.  Quicksilver is infotainment with a heavy focus on the history of money, mathematics, and the daily life of 17th century Europe.
Posted by Jesse at 7:51 PM