Starcraft 2: Greatest Match of All Time

Since 2018, most fans of SC2 have been waiting and waiting for the Maru–Serral showdown. And while the two have faced each other a few times, none never seemed to be 'the match'. There was a best of 1 at GSL vs. World. There were a few group stage meetings, and a couple Ro8s. Maru's wrists weren't in good condition, the meta-wasn't right, there wasn't a lot at stake, Serral wasn't his normal self... a lot of reasons why the match fans wanted never took place. But finally, as of yesterday, we've got it. The Maru-Serral showdown fans have been waiting for, and it produced the greatest sc2 match EVER. Yes, capital letters-worthy. Let's set the stage.

2021 has been a good year for Serral. While he doesn't have the hardware that he racked up in 2018, he has arguably been playing at a higher level. SC2 is now better balanced, and many players have finally caught up, pushing him to somehow be even better. The past few tournaments have seen extremely dominant runs by Serral—literally over the world's best players. He has finished top-two in all four premiere tournaments he played in, winning two of them. Maru's 2021 has also not been the same year as his 2018. It's difficult to top winning four GSLs in a row. But it's clear this year his career is once again on the upswing. He has been top-four in six premiere tournaments, with runner up twice, and winning one. His major-class tournament victory, given the best in the world were his competition, should also be considered: ASUS ROG. Overall, he has regularly shown this year the form people would call Just play like Maru. And finally, as of the writing of this article, Serral and Maru are ranked number one and two in the world, respectively, on Aligulac.

When the dust is settled on Starcraft 2, and fans are arguing who was the greatest of all time, undoubtedly Maru and Serral's names will be discussed to the very last moments. What better way to fuel that conversation than put them into an important match with both playing their absolute best?

The arena was the King of Battles tournament. Unfortunately online, the maps had to bounce back and forth between the Americas West and North servers in order to keep ping fair. It was early-early in the morning for Maru and evening for Serral. Both players had come out top in their groups; Maru did not drop a map, while Serral dropped two. In the bracket, however, things reversed. Maru dropped a couple of maps, and struggled to put away a fighting Dark in the semis, but did. Serral, on the other hand, breezed through the bracket. After playing two Bo5s each that day, that left the duo fighting for the final spot in the tournament: the winner.

Prior to the King of Battles, Serral and Maru had played each other a total of eight times (according to aligulac). One Bo1 and the remainder a mix of Bo3s and Bo5s, Serral held the edge in terms of victories (6-2), but the score is a more even in terms of maps (12-8). They had not, however, played a Bo7. The King of Battles grand final was a Bo7. The only way to raise those stakes is make it a Blizzcon final. If a grand finals Bo7 is not the place to have the Maru-Serral showdown, then I don't know what is. 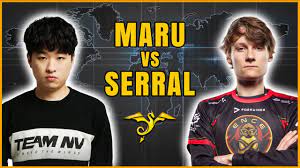 I will not go over the match in detail, nor will I tell you who won. What I will tell you is that the match had almost, if not, everything. Short, long, micro, macro, early game, mid game, late game—I would guess viewers were able to see, at some point in time, every unit, upgrade, and spell that SC2 offers terran and zerg. You want massive, late-game clashes with huge, complex armies? Serral and Maru put on a clinic. You want nail-biters for which supply is no indicator of eventual victor? You should wear gloves. You want matches which are so high level that the macro management of economy (as opposed to purely army production and control) proves to be the decider in key maps? Get out your calculator, nerd. You want games which shift momentum multiple times? Make sure your head is screwed on tight (good advice, regardless). Add to this all the weight of expectation fans have, and you've got the perfect marriage of hype and reality. The two performed to the top of their ability, and we the viewers reaped every reward. Two days later and I'm still raving.

I have watched thousands of SC2 matches. Several times per year I walk away thinking: OMG, that was an awesome match worthy of the annals of the game. Never have I thought: it can't get better than that. But with this match it happened: That is the pinnacle of SC2. It can't get better.

Go ahead. Do it. Type “greatest sc2 match ever” into YouTube's search box and see what you get. Watch the top hits, come back, tell me what you think. Then watch this match.

Without further ado, here is the link. Good luck to all of us that such a match can somehow be topped.