What Comes Next: Questions & Potential Answers Regarding The No-God Duology 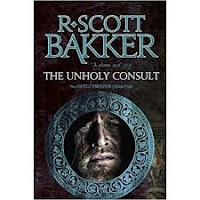 In the wake of reading my review of The Unholy Consult, R. Scott Bakker’s concluding volume to the Aspect-Emperor series, a gentleman from the Second Apocalypse forum (the place for discussion on anything Earwa) contacted me privately, asking what I thought of the conclusion to The Unholy Consult and my opinion what might come next—what the follow up and concluding duology, tentatively titled The No-God series, might hold for readers. The more I thought about answers to these questions, the more I realized I should organize them ‘on paper’, and if going that far, why not post them. So, if you haven’t read The Unholy Consult, do not read this post as it will contain major spoilers.  (Another warning, I am writing this with extremely little knowledge of what's happening in forums and other discussions on the Second Apocalypse, so apologies if it seems naive to readers who have invested themselves significantly more than than me into the series.)

Before I dive in, I should note that I read somewhere a while ago (of course I can’t find it now) that all along Bakker had in his mind a solid outline for the series to date, and generally stuck to it throughout the writing, but has only a relatively concrete path before him for the next series. For those not paying attention, this means a few things:

1. The abrupt ending of The Unholy Consult was planned all along, and should be considered as such
2. The bulk of Bakker’s thematic agenda has been delivered
3. Anything that comes next is likely to be more complementary and confirming than revolutionary or game-changing

Therefore, the question is: where to go from the rise of the No-God and the dawn of the Second-Apocalypse?  Before getting into the possibilities, we need to establish three key baselines.

The first is one I don’t think many readers would immediately go to: Bakker’s belief in humanity.  Let me explain.  To date, The Prince of Nothing and Aspect-Emperor series have not highlighted the brighter side of our species.  There have been a few silver linings (for example, Sorweel’s falling in love or Achamian learning he has as son, to name a couple), but overall I think it’s fair to say hubris, deception, egoism, the limits of human perception, reversion to atavism, and other vices of humanity have played a stronger role, culminating in a scenario wherein humanity has inadvertently destroyed itself in the Second Apocalypse.  Looking ahead to the No-God series, the door is wide open to the question: does Bakker believe humanity can redeem itself after falling so far to date—certainly not in Tolkien-ian fashion, but in some other relevant way?  (If there is to be a No-God series, then I have to believe the answer is ‘yes’ considering that if the answer’ is ‘no’, then the ending of The Unholy Consult seems enough: the nail in the coffin can only be driven deeper.)

The second baseline is that, as of the conclusion of The Unholy Consult, basically all of the men of Earwa have been killed or are about to be.  Either volunteers for or conscripted into the Great Ordeal, they now appear to be totally destroyed—perhaps not to a man, but for discussion purposes, gone.  Essentially what remains of the human portion of Earwa are women, children, and the elderly.  It’s a major gap that could be filled in a variety of ways.  (The most likely answer is the No-God, but if Bakker chooses to pursue a different course, then it might also be a remote but powerful tribe, the Scylvendi, or some authoritarian individual who survives the Great Ordeal?)

The third and final baseline here is the overarching mythos of Earwa and the fact it will remain regardless what happens after The Unholy Consult.  The continent’s history, from non-men to men, has never been directly portrayed, but has been a constant element of the series' background, from Achamian’s dreams to character discussions.  Mainly due to Achamian’s dreams, the First Apocalypse has held the most prominence in this history.  Its events are just as well known to the reader as the actual events of Achamian’s life.  Looking at the exact point on which The Unholy Consult concludes, the First Apocalypse provides a sounding board for the events of the Second Apocalypse: does the second ultimately play out like the first, or does something change?  Does humanity somehow find a way to save itself, or is it doomed?

Taking these three baselines into consideration, and assuming that humanity wants to make a comeback against the No-God, I think Bakker is faced with a simple choice in extending the Earwa storyline: go long-term or go short term.  Looking at going long-term, I think something like Frank Herbert’s God Emperor of Dune would be a reasonable parallel.  Without anyone able to contend with the No-God’s power, it means there would be a lengthy period in which he has established and is maintaining power over Earwa (assuming he does not kill all the humans, that is).  In God Emperor of Dune it was thousands of years, which effectively removed all of the original characters from the story.  If Bakker does the same, he likely would also have to skip past the original characters who survive as well, or at least put them well into old age where they are essentially ineffective.  Thus Achamian’s son, for example, could have a potential role to play in this long-term scenario, as could a Scylvendi (you know at least one will survive the Second Apocalypse) if there is to be any comeback for humanity mounted.

The short term direction for the No-God series is to follow immediately upon the events of The Unholy Consult.  In this scenario, the denouement of the battle on Golgoterath is put into words, followed by the aftermath of Earwa at large.  While I believe Bakker indirectly described humanity’s downfall by ending The Unholy Consult the way he did, there is still room for a handful of humans and wizards to fashion some miraculous comeback, or at least survive Golgoterath and a few years later foment a rebellion that takes down the No-God (again, the Scylvendi seem likely players in such a scenario).  Perhaps the Heron Spear, which did feature in the final battle, finds its way into the right hands?  I’m sure a lot of readers were disappointed that Achamian, or least his wizardly powers, did not play as crucial a role in the Aspect-Emperor as they did in The Prince of Nothing, so perhaps there is still a little room for them?  Achamian the closest thing Bakker has created to an overarching ‘hero’, a standard epic fantasy storyline would see Achamian kill the No-God with his powers, but given how Bakker has increasingly distanced himself from formulaic fantasy, I don’t think this is likely, just a possibility.  Regardless how individual actually events play out, choosing the short term option would form some kind of commentary on the results of the First Apocalypse, either in how it mirrors or breaks from them.

In summary, I understand why Bakker may not have a concrete direction to go after The Unholy Consult.  Nearly everything he has written thus far, most significantly the characters, has been to arrive at the moment of the Second Apocalypse, and that, for certain, has come.  If he wants to continue the story of Earwa, I think he faces a simple choice: long or short term.  Either wipe the slate almost clean and rejoin the story many years down the road at a time when the No-God has entirely subjugated humanity, or, pick up immediately after the events of The Unholy Consult in a scenario that either parallels or breaks from the events of the First Apocalypse.  It’s a tough choice.  If the former is true, then it’s likely there is extremely little left of humanity, meaning some small group would be mounting a revenge against the No-God, and it likely would not be any of the characters we are familiar with (though possible—perhaps an ancient Achamian and teenage son combo?).  The short-term scenario would allow Bakker to stick with the characters readers are familiar with (at least those who survive), as well as play events against the happenings of the First Apocalypse for comparison and contrast.  I guess ultimately it depends on what Bakker hopes to accomplish thematically with The No-God duology, and which of those scenarios, long or short term, can best present said themes.  I know for myself I would like to see Bakker’s thoughts on humanity’s potential at large, confirmed.

(Just as a joke, there is a third option possible for the No-God series: the alien mothership lands, gives the No-God a spanking, tells him to leave those flawed humans to their own devices, and sweeps all the sranc and bashrag away in a blinking green UFO…)
Posted by Jesse at 12:10 PM