Review of Moonglow by Michael Chabon

Michael Chabon’s 2000, Pulitzer Prize winning The Amazing Adventures of Kavalier and Clay, is a brilliant piece of Americana.  Telling the story of two immigrants through the lens of the mid-20th century comic book binge, the only thing topping the prose was the earnestness and relevancy of the humanity portrayed to the culture it sprang from.  Sixteen years later, Chabon proves the 20th century is still a major go-to for his work.  Moonglow published in 2016, it brings to the table every ounce of Chabon’s prose talents and understanding of the human soul through the lens of a country’s history which helped shape its today.

A personal, largely biographical parallel to his own grandfather’s experiences and adventures growing up in the US throughout the 20th century, dying in the 80s, Chabon once again uses language in rich, clever fashion to tell a story with whole heart.  Moonglow is character and story driven.  Switching time frames between brilliantly detailed set pieces, the reader gains a patchwork understanding of what made grandpa Chabon tick, his effect on the future generations of his family, and the cultural and social spheres encountered just beyond the personal.  Grandpa’s obsession with spaceship models, his meeting with a rector in Germany amidst the final days of WWII, his hunting of a python at an old age community in Florida, the first time he met his future wife, his throwing of a cat from an upper floor window—these and many other scenes show a truly talented writer at work.  Taking the quotidian and making it uniquely human for the delicate quirks of the people involved, indeed, Chabon’s talent is one many writers dream of but so few have.
Read more »
Posted by Jesse at 9:22 AM 2 comments:

Review of Metronome by Oliver Langmead 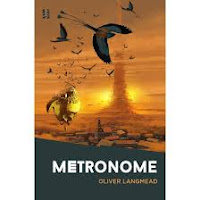 Likely the most common first impression of Oliver Langmead’s debut novel Dark Star is the fact it is written in epic verse. But surely what keeps asses in the seats is the strong story complemented by stronger visuals. A dark backdrop offset by flashes of neon and static as the detective noir spins its web, it is a book that can be enjoyed from several angles. Not giving in to gimmick (thankfully), Langmead, for his follow up novel, abandons epic verse but sticks to his strong suit. Evoking image and scene splashily, Metronome (2017, Unsung Stories) features adventures and quests through dreams, the aesthetics continually inching toward fireworks.

But Metronome begins innocently enough. James Manderlay is a client at a home for the elderly. A former songwriter, he collects paltry royalty checks while trying to keep his sanity in a place seemingly full of people off their rockers. The age and steadiness of his hands betraying his daily tasks, it seems only in dreams do they respond completely to his commands. Nightmares lurking in dark corners, his travels through dreams seem more often escapes rather than journeys. That is, until he meets a man killing nightmares, and is given a strange but useful compass. The dreams taking more concrete shape in the aftermath, nights become less dark and more adventurous.

Review of The Red Tree by Caitlin R. Kiernan

If ever there is a novel to ignore the cover, one would most certainly be Caitlin R. Kiernan’s 2009 The Red Tree.  What’s depicted seeming to indicate the novel is a faceless drop in the contemporary fount of YA slush, in fact, it is anything but.  A mature offering without the teen angst portrayed on the cover, Kiernan takes her novel to the next level by bringing to bear writing chops she had primarily been known for in short fiction into her long fiction, telling a very personal, human story in the process.  Any homage to horror or Weird, or acts of poignant catharsis, are just icing on the cake.

Sarah Crowe has moved to Rhode Island in an attempt to escape a disastrous relationship and kick start a long overdue novel.  Renting an apartment in an old, creaky farmhouse, Crowe has trouble settling in from the beginning.  The shadows in the basement are dark, and something in the air doesn’t feel right.  Making matters worse is Crowe’s discovery of an unpublished manuscript amidst the farmhouse’s clutter describing the history of a seemingly malevolent tree on the property.  A massive red oak, the author of the manuscript, in fact, eventually hung himself from it.  But pushing things over the top is that an artist takes up residence in the farmhouse’s attic.  The new novel may never get written given the circumstances, so best to pick up pen and paper and write down one’s thoughts and experiences, as strange as they are around the red tree.
Read more »
Posted by Jesse at 12:35 PM 2 comments: