While Bruce Sterling and William Gibson would likely argue differently, there is no denying the popular appeal of what has come to mean ‘cyberpunk’ in the broader cultural mindset.  Mostly a visual understanding, images of dirty neon streets, people augmented with technology, urban sprawl, and dark static skies beneath which thieves, corporate thugs, and hackers co-exist spring quickly to mind.  Taking this motif and working it nicely into a game is Bloober Team with 2017’s Observer.

The gritty game playing out over the course of one night, players take on the role of Detective Daniel Lazarski, special investigator in the Krakow police department.  Getting ready to start work, he gets a mysterious phone call from his son Adam who is in need of help.  Arriving at his son’s broken down, slum apartment, he discovers a headless body on the floor.  Using his digital and biology implants to search the room, Lazarski discovers that A) the body does not likely belong to his son, and B) one of the neighbors may have further information.  As rain splashes down the gutters of the slum building, Lazarski gets to the bottom of the murder in a fashion only cyberpunk offers.

Review of The Blood of Elves by Andrzej Sapkowski

I am one of the millions of people who bought, played, and absolutely loved CD Projekt Red’s Witcher 3: The Wild Hunt video game. The tip-top best in storytelling action-adventure, the dozens upon dozens upon dozens of hours I spent playing were wholly engrossing for a variety of reasons I won’t go into, here (rather, here). But The Witcher IP remains the creation of writer Andrzej Sapkowski, and reading recently of his disgruntled (jealous?) views towards the game’s development and writing, I decided to have a go at his novels to see how the original compares.

The Blood of Elves (1994) opens on the dramatic scene of a young princess forced to flee her ruined and pillaged kingdom of Cintra. Attacked by the ruthless Nilfgardians from the North, princess Ciri finds her way to Kaer Morhen, home to a small enclave of witchers (magically endowed monster hunters) who teach her what they can of their art. Ciri’s mysterious potential for magic discovered in the process, the group decides the best course of action is to entrust her to a school for enchantresses. But transporting Ciri from Kaer Morhen to the school is not an easy task. The Nilfgardians still looking to kill the princess to rightfully claim Cintra, the witchers entrust Geralt of Rivia to escort Ciri through the hazards of the cities and the wilds—something which proves to be a bigger challenge than just killing monsters.
Read more »
Posted by Jesse at 9:51 PM No comments:

Review of A Bond Undone by Jin Yong

A Bond Second is the second volume in Jin Yong’s (aka Louis Cha) The Legend of the Condor Heroes series. Thus, don’t bother reading further unless you’ve read the first volume in St. Martin’s Press’s new translation, A Hero Born.

The Legend of the Condor Heroes initially published in instalments, later as a novel, and now in English in volumes, A Bond Undone picks up events directly where A Hero Born left off. Lotus Huang and Guo Jing continue their star-shaped courtship, fighting their way through a variety of kung fu masters and illusions. A good portion of their fight is through Cyclone Mei, the deranged woman looking to get revenge for her lover’s murder. Mei’s kung fu skills so powerful due to her knowledge of the Nine Yin Manual, a host of villainous characters follow in her wake, trying to get their hands on the manual to learn its invaluable contents. Naturally, it’s Guo Jing who unwittingly comes in contact with the sacred manual, and who must fight even harder to stay alive.

If A Hero Born was an action-packed novel, then A Bond Undone is practically non-stop. Scenes are introduced with the barest minimum of details before feet and fists start flying, page after page after page. While often approaching maximum capacity, Jin does a good job delineating the scenes so as not to confuse the reader. It is Hong Kong action films in written form (and likely much of their inspiration), but each scene, for as fast as it moves, remains focused. (It should come as no surprise the book has been adapted multiple times for Chinese television.)
Read more »
Posted by Jesse at 8:28 AM No comments:

Review of Coyote Horizon and Coyote Destiny by Allen Steele

Rather than review Coyote Horizon (2009) and Coyote Destiny (2010) as the separate novels they were published as, I am choosing to review them as the single story they were conceived as—an aspect highlighted by the fact the first book ends on a major event resolved by the second. (That being said, Steele does state in the intro that Destiny can be read without having read Horizon, and while he is technically correct, it’s not recommended if the reader wants to have any true connection to the characters and situations.)

Allen Steele’s Coyote series is, for the unaware, a mix of planetary adventure and social science fiction that harkens back to yesteryear sf while incorporating elements of the 21st century’s in an underrated mix of well-paced storytelling. About the human colonization of an extra-solar planet, the moon Coyote, Steele has, in five books thus far, taken the reader on a step by step journey, relaying the troubles of taming a wild land, setting up civil infrastructure, and dealing with political strife, all the while trying to balance the needs of our home planet Earth, and Earth stretched to the maximum in terms of resources, environmental pollution, wars, religious ideals, etc. Steele’s style straight-forward and steady, he has built a memorable image of the first days of a new human civilization, a story which culminated in Coyote’s recognition as an official political entity at the end of Coyote Frontier. Plenty more stories to tell, Coyote Horizon and Destiny form a single tale, or interwoven tales depending how you look at it, that defines the next stage in the evolution of the planet.
Read more »
Posted by Jesse at 10:43 AM No comments:

Resident Evil on the first Playstation is one of my favorite games of all time.  I still recall the darkened-room play sessions with a friend, trying to solve the puzzles while not getting chewed on by a zombie.  I still recall the wonder of unlocking and exploring a new part of the mansion.  I still recall with some fear the spiders dropping from the ceiling, the eerie footsteps, the shark chase, and those damn dogs jumping through the window.  And I recall the satisfaction of finishing the game without one hint or clue save teamwork.  Video games exiting my life after that year (for whatever reason), I never played Resident Evil 2.  Thus in my return to video gaming it was something of a surprise to learn that Jill’s tale in Raccoon City had spawned not only a sequel, but a whole series.  And not only a series, but a remastered version of my beloved original.  Apparently a popular item, it motivated Sony to commission the remaster of the second Resident Evil title.  Some people cite it as the best of all the games in the series, so let’s see how it stands up.

Resident Evil 2 opens on a scene with a truck driver mawing on a hamburger, driving down a road in the pouring rain.  His face oily, the ketchup squirting, droplets of water visible on the windshield, it’s quickly apparent this is not a PS1 game, graphically.  Accidentally running over a woman, the driver gets out to check on her, and—you guessed it—gets mawed on by a zombie.  Enter Leon and Claire, a policeman and bystander, respectively, who have stopped at a nearby gas station, only to discover the same as the truck driver: the dead in fact live.  Ramping up events of the original Resident Evil, the virus has spread to Raccoon City, and Leon and Claire are in a fight for their lives to escape. 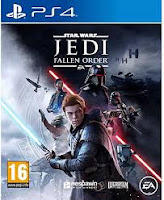 Cracking open Jedi Fallen Order, Respawn’s 2019 action-adventure title, is a highly enjoyable experience for any Star Wars fan looking for a single-player campaign that holds true to the motif of the original movies. The player quickly recognizes the game’s DNA: the blood of grandpa Dark Souls and grandma Tomb Raider flow in its veins, but it remains unequivocally a Star Wars experience with quality story that betters both The Force Awakens or The Last Jedi.

In Star Wars lore, Fallen Order occurs just after Revenge of the Sith, in particular Order 66 that wiped out all of the Jedi—well, all except the main character of Fallen Order. Cal Kestis is a young Jedi in hiding. His master killed as a result of Order 66, at the beginning of the game Cal finds himself in hiding on an Imperial world, earning money scrapping junk spaceships. But when an Imperial patrol accidentally uncovers his identity, the chase is on. Cal’s training still not fully complete, he falls in with a rogue cargo ship, and together with the crew try to achieve the next phase of his development, all while trying to stay one step ahead of the Empire—alive.
Read more »
Posted by Jesse at 9:49 PM No comments:

The following is a list of the books that were more personally enjoyable to me in 2019, regardless of year published. (For the best of what was published in 2019, see here.)

With small children, a major project at work, several extended business trips, and a kitchen renovation, my reading slipped this year compared to previous years, but I was still able to read a fair number of books. I did read many genre-centric books, but generally I feel myself slipping away from them. The inundated state of the market, the inundated state of my mind (hundreds and hundreds and hundreds of books the past decade), the underlying current of: “Maybe I’m approaching the end of that cycle in my life?”, and the desire to read more non-fiction seem the biggest influencers.

In no particular order, these are the books that poked their proverbial heads above the water in my (proverbial) mind the past year, starting with Fiction, and ending with Non-fiction:
Read more »
Posted by Jesse at 7:00 PM No comments: