Review of The King's Blood by Daniel Abraham

The Dragon’s Path, first book in Daniel Abraham’s The Dagger & the Coin series, was a slow burn. Perhaps too slow, the novel took its time, building a foundation of characters and setting for the four books to come, that may have put off would-be readers. It wasn’t until roughly the two-thirds’ point that the plot’s gears started to bite into one another, and the wider picture started to come into focus. Building off this, the second book in the series, The King’s Blood (2012), carries the momentum forward into a novel that is likely more to the liking of readers with a preference for pace and conflict.

The King’s Blood returns to the viewpoints of the same handful of characters. Geder, now regent to the king, continues his arcane studies under the watchful eye of the spider cult, all the while watching over Astor, heir to the kingdom. Ever faithful and honorable, Dawson attempts to clean up the mess of the failed assassination attempt, even as he sees King Simeon’s health failing. And Cithrin, despite her rise in power in the Medean bank, is now subject to a new line of notary authority, a line that is entirely to her disliking, forcing her to find creative ways of getting done the things done that she knows are good for her and the bank.
Read more »
Posted by Jesse at 12:22 PM No comments:

Review of The Glass Hotel by Emily St. John Mandel

Emily St. John Mandel’s 2015 Station Eleven was a hit. Science fiction by definition but more humanist in aim than the majority of work that fits under that umbrella, Mandel earned herself a number of fans on the “other side”, despite that her first three novels didn’t ping the “squids in space” radar. Wisely taking a five-year break to let the hype cool down, Mandel returns in 2020 with the novel The Glass Hotel. While likewise technically genre (the reader can discover how), again, Mandel has focused her energy on the people who populate her story, and the layers that make them human.

Character study in the era of corporate fraud, The Glass Hotel is set primarily in the early Oughts, and looks at a few branches of relationships—family, friends, spouses, etc. living through a major, Enron-esque corporate scandal. Foremost on the screen, but only by a few frames, is a young woman named Vincent. Raised in atypical circumstances on a remote British Columbia island accessible to mainland only by boat, she reels, seemingly throughout her life, from the unexpected death of her mother when she was a young teen. Children to a broken marriage, her brother Paul relieves his existential angst through narcotics.
Read more »
Posted by Jesse at 4:55 PM No comments:

Review of Paladin of Souls by Lois McMaster Bujold 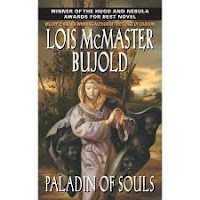 Lois McMaster Bujold’s Curse of Chalion was for me one of those perfectly plotted novels. Characters, scenes, and situations are introduced at proper moments, the pieces shift and evolve in natural ways, characters retained enough realism to suspend disbelief, and the whole story reaches a climax that is satisfying, organic, and yet surprising in a way that puts a bow on the whole package. Not precisely a once in a lifetime novel, I nevertheless went into the follow up novel, Paladin of Souls (2003) with tempered expectations. It’s good I did.

Paladin of Souls is an off-shoot from Curse of Chalion, not a sequel. Taking Ista, Iselle’s mother from Chalion), it follows her on what begins as a religious pilgrimage, but becomes a journey like she never expected. Longing to escape the stifling of court formality, Ista organizes an incognito trip to the temple of her god, the Bastard. She invites a free-spirited courier named Liss and a priest to be her companions, and sets out on the road. The group do not get far, however, before disaster strikes. Plans cut off at the knees, Ista finds herself at Castle Porifors and the heart of a uncanny mystery. Dark magic straining at the edges of their world, Ista must trust her own dark powers and instincts to help those who helped her.
Read more »
Posted by Jesse at 11:06 AM No comments: