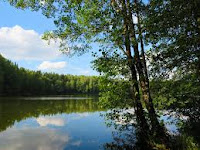 As with every summer, it's vacation time!  As such, there will be a two-week hiatus on the blog as I enjoy the sun (hopefully!) and free time with my family.  Haven't chosen any books yet.  Maybe Michael Chabon's Telegraph Avenue?  Maybe Brian Aldiss' Greybeard?  Maybe both?  We'll see.  Hope you also have a chance to relax.
Posted by Jesse at 1:21 PM 1 comment: 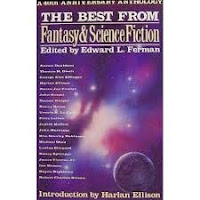 For the unaware, there is small handful of magazines which have clung tight to the decades of evolving genre, sustaining their presence in readers' mailboxes and hands. While dozens have risen and fallen, the Fantasy & Science Fiction Magazine has held strong. And the reason is quality. Able to steadily produce quality Best of anthologies as a result, the Fortieth Anniversary (1989) proves no exception.

Kicking off the anthology is Fritz Leiber's “The Cat Hotel”—a catty story with a catty mystery. Matching witches with felines in the modern world, the main character is a cat who needs to get to the bottom of some strange, veterinary behavior. Building its own, unique setting, “Slow Birds” by Ian Watson tells of a family feud in a future/fantasy world in which sailing races on glass are a prominent social feature. Needing fleshing out (novella-length would have been better), Watson nevertheless puts in place the skeleton of the idea regarding humanity's blindness in the moment vs. ideology. 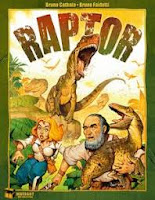 Like most people who play board games I assume, I sometimes look in awe at games that large swathes of people fall in love with while ignoring games that seem better on many fronts. Agricola, for example, feels more like a forced farming experience rather than a fun, family farmsteading experience, but yet… As such, there are a number of games I feel fly under the radar. Bruno Cathala’s (2015) Raptor is certainly one.

An asymmetrical two-player game, Raptor sees one player taking control of a mama raptor and her five babies, and the other player a team of ten scientists. There are a couple win conditions, but generally the scientists want to either kidnap three babies or tranquilize mama, and the mama raptor wants to get three of her babies to safety or eat all the scientists. Gameplay takes places on a small, six-piece modular board with rocks obscuring sight in various directions. Action is driven by a simple card mechanism. Each player has a deck of nine cards, each card numbered one through nine. At the beginning of a round, each player draws up to three cards, chooses one, then players simultaneously reveal. The player with the lowest number gets to take the action depicted on the card, for example the mama raptor can scare a scientist, remove a tranquilizer dart, leave the board and re-appear elsewhere, etc. The scientists can shoot a tranquilizer dart, create a fire barrier, kidnap a baby, etc. The highest number gets to take as many actions as the number difference with the opponent's cards. If the raptor player played a 3 and the scientists played a 7, the scientists would have four actions, of which there is another selection per side. The game playing quickly (+/- 30 min), the last man (or dinosaur!) standing, wins.

If you want to get off the beaten path of speculative fiction, then get out your machete and have a crack at a Paul Di Filippo book. While he has published several novels, dozens upon dozens of short stories have seen print, meaning it's most likely a collection, . One example is Fractal Paisleys (1997). Eclectic to say the least, it is not the best Di Filippo collection, but it certainly has the reader hacking at uncharted territory with every story.

There are stories, regardless of genre or taxonomy, which seem to derive from such a uniquely imaginative place that nothing could ever explain their source or inspiration. The story kicking off this collection, “Master Blaster and Whammer Jammer Meet the Groove Thang”, is that. About two laid back guys in a van who come in contact with a pleasure alien, adventure, to say the very very least, ensues. The title story “Fractal Paisleys” starts in the Lil' Bear Inn, but ends up in a place more picaresque. About a trailer park man and his bartender girlfriend having the night of their lives after discovering a piece if fantastical technology, it asks: want to re-write your environment with a remote control?

Review of The Mosquito Coast by Paul Theroux

While its star has faded in the past decade as the middle class slowly descend into the lower and culture wars have taken center stage, there is still an element of entrepreneurial spirit in the US. The tabula rasa mentality of early American settlers still exists in spots today. Examining this spirit—wait, that’s putting it too lightly. Holding this spirit over a fire until its breaking point is Paul Theroux’s 1981 novel The Mosquito Coast. The Ayn Rand dream? Let’s see.

The Mosquito Coast is told through the eyes of fourteen year-old Charlie Fox. But it’s his father, the wildly eccentric Allie Fox, who is the center of the show. Cantankerous, self-righteous, nominally racist, deeply intelligent, and innovative, Allie rants and raves about the shortcomings of American culture—Chinese-made this, and inflation that—while putting his money where his mouth is by inventing his own gadgets and technology. Keeping Charlie, his three siblings, and their mother off the grid, the children are home-schooled in luddite conditions, raising their own crops for sustenance. One day, after yet another of his gadgets fails on the market, Allie has enough and decides to move the family to Honduras to start again. The mosquito-thick jungles of the Central American country offering Allie what he’s looking for, the family goes on to set up a homestead in the countryside. And much more. Unable to escape his ideological conflicts, Charlie soon finds his father ranting and raving about the local situation as well. Eventually, something has to give. 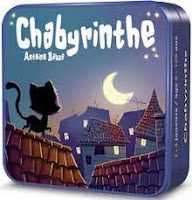 I will start by saying, after four years of regular board games at my house Chabyrinthe is still the biggest surprise in our collection. Coming in a small tin only slightly bigger than those in which they sell mints, inside is a game I have played more than any other with my small son. Playful yet intelligent, simple yet requiring lateral thinking, those cute cats just need to find a way through the labyrinth of roof drains and street canals to a new home.

Boiled down to a single thing, Chabyrinthe is a logic game. A 4x4 grid of cards is laid out on the table. Each card has a water drain of some type. Some are intersections, some are curved, some go over/under, etc. At points around the perimeter are laid two homes and two cats, and it is the players’ job to align the labyrinth of drains and canals such that a cat has a path to a home. Each player having two moves on their turn, they can twist or shift the cards to realign the labyrinth, trying to create a path. Each cat has a number of points printed on it (3 through 5), and the player who collects the most points by getting cats to homes is the winner. The whole game takes anywhere from 15-30 minutes, depending on the age of the people playing—the older, the shorter.