Look at that cover—yes, look at it. I feel like a high school graphic design student could have done better. But don't let it fool you. Look at the editor's name. Where so many of his contemporaries are unable to get variety from their commissioned authors, Ian Whates is consistently able to deliver themed anthologies with enough material that strays beyond the core to make things interesting. Such is 2015's Total Conflict.

But the anthology does not open without giving readers what they expect based on the spacetroop—ahem, space marine “gracing” the cover. When a valued space marine falls in combat, his comrades hold an appropriate wake, complete with whiskey in “The Wake” by Dan Abnett. Abnett capturing grunt vernacular very nicely, the story still pans average—classic/generic sf, depending on your perspective. Largely the same as Abnett’s story (space marines wielding futuristic guns, engaging in bro talk while shooting at alien stuff), but without the style, “Psi.Copath” by Andy Remic ensures the cover image has been thoroughly dealt with.
Read more »
Posted by Jesse at 10:05 PM No comments:

Adam Roberts is one of the most unique voices currently writing fantastika—an extremely difficult thing to accomplish given the sheer volume of material saturating the market. Having the knack for striking upon something out of the mainstream ordinary and developing it in a speculative setting with a hook or at least a barb), the talent also extends to short fiction, something the eighteen stories in his 2003 collection Adam Robots (not a narcissistic self-promotion) exemplify—at least, mostly.

Adam Robots opens on the wonderfully biblical yet utterly sacrilegious title story. It tells of a robot brought into the world and instructed never to touch a certain jewel atop a metal pole. Curiosity killed the cat, but does disobedience damn the robot? Wildly scientific, wildly implausible, and a wildly, enjoyably readable story, “Shall I Tell You the Problem with Time Travel?”—as the title states—describes said problem with time travel, and of course, how to get around it—nuclear bombs, dinosaurs, and severed thumbs included.
Read more »
Posted by Jesse at 8:11 AM No comments:

Review of Crowfall by Ed McDonald 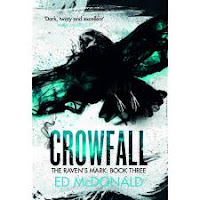 I'm starting to feel like a broken record, but given the amount of derivative bilge published today, the message bears repeating: stereotypes are ok; it's how you execute. Epic fantasy is a dead, beaten horse—but it's still possible to write effectively in the medium and create engaging, enjoyable stories. Enter Ed McDonald's Raven's Mark series. Nothing new here; it's pieces can all be found in multiple peers and ancestors. But McDonald delivers everything with color and edge, and evolves the pieces in a plot that simultaneously builds and surprises. But could McDonald maintain the success for the trilogy's conclusion, Crowfall (2019)? Let's find out.

Like Ravencry, Crowfall opens multiple years after the events of the prior novel. Ryhalt has gone off the grid, eking out an existence in the Misery. The blackness of the Misery seeping into his very soul, Ryhalt is cursed with magical powers he'd rather not have. But when a summons from his master arrives on his “doorstep”, Ryhalt must return to civilization to answer the call, and in doing so, encounters pieces of his old life he'd rather not. Society appearing on the verge of collapse under the weight of the Deep Kings, once again Ryhalt must bridge the gap. But is everything as it seems?
Read more »
Posted by Jesse at 7:30 AM 1 comment:

Genetic disposition, environmental response, brain tuning—whatever the nature vs. nurture argument is, I love games like Limbo and Inside. A parade of bite-sized puzzles with a coherent art motif binding them all together, they are true brain candy. Offering more for the player so inclined, they likewise give tantalizing hints and clues about the larger world of the game, giving rise to questions about who, what, where, and, why. When hearing Tarsier Studio’s Little Nightmares (2017) was in this same vein, my radar pinged. Having now played the game, it’s still pinging.

Though having the same relative concept as Limbo and Inside, Little Nightmares is themed entirely differently. The player guides a little girl in a yellow raincoat named Six through a ship full of bizarre traps, puzzles, and human-ish things wanting nothing more than to catch her. Skittering gnomes, leaky pipes, macabre effigies of humanity, dark corners, leech-like crawly things, creaking doors, the roll and pitch of the ship—all combine to give gameplay a surreal, horrific feel. A little girl trapped in a big person’s world, survival is not always guaranteed.
Read more »
Posted by Jesse at 4:48 PM No comments:

Review of MaddAddam by Margaret Atwood

Snowman the Jimmy, Snowman the Jimmy, it’s such a pleasantly off-kilter name I can’t help but smile to myself every time I hear it. The Crakers, their car freshener body odor, periods of blue libido, and purr-healing providing a backdrop that only exacerbates the oddity. Snowman the Jimmy fits right in. And still MaddAddam (2013), third and concluding volume in Margarat Atwood’s Ory and Crake trilogy, manages to strike at the heart of the real humanity at stake in large chunks of contemporary socio-economic and technological reality.

MaddAddam picks up where events of each of the two previous novels left off. With Snowman the Jimmy (), it’s literally with the injury he had at the end of Oryx and Crake. In need of care, he gets it from Toby and Ren, the two women who had started a small community of humans and Crakers at the end of The Year of the Flood. Nursing the man back to health, the group try to rebuild some semblance of normal life in a world still threatened by painballers.
Read more »
Posted by Jesse at 8:54 PM No comments: