Review of The Second Sight of Zachary Cloudesley by Sean Lusk

Trying new authors on the market today is a real Vegas trip. Cover copy, awards, and blurbs just can't cover the nuances of many books. Reviews can be helpful, and thus I hope this review of The Second Sight of Zachary Cloudesley by Sean Lusk (2022) can help you determine whether this is a book for you. (Gods I'm getting desperate for intro material...)

Surprise-surprise, Zachary Cloudesley is the star of the novel. His mother dying in childbirth, Zachary's early days are with his loving father Abel, a clockwork inventor, as well as a strong-minded wet nurse, Fiona. As a boy, his rich, eccentric Aunt Frances also steps in to the picture, demanding that part of Zachary's upbringing be her responsibility. Through this variety of people, Zachary comes to his teenage years—something which happens faster than normal given Zachary's unusual talents. Able to see visions of past or future after touching a person, Zach develops a keen, sensitive intelligence to the people around him, and the purity of the love they have for him. When his father is taken, Zachary is forced to put his nascent adulthood into practice to find him.

Review of Many Are the Dead by Anthony Ryan

One of the advantages of novellas is that it gives readers a taste of a writer without the financial and time commitments to a full novel. With epic fantasy books these days doubling as wall-building material, this was never more helpful when looking to explore a new writer; you can test out their style before jumping, or not jumping, into the deep end. Many Are the Dead (2018), was my litmus test for Anthony Ryan. Acid, base, or neutral?

And time now for the obligatory plot summary: old friendships come anew, fantastical beasts attack, and Medieval swords and spears in forest and stronghold. Yeah, that's about it. Oh, and a gruff, no-nonsense main character who does heroic things with his sword. Anything else? Not really...

Eeeerrrwhoaaa… That was a child making a zooming airplane sound. Trust me. I know because I’ve played Richard Scary’s Busytown: Busy, Busy Airport (2011) many times with my kids, and every time it sounds like that.

A lightly competitive, children’s game, Busy, Busy Airport sees 2-4 players taking turns to load passengers into their airplanes for trips to various locations that have been scattered around your house, trying to collect the most souvenirs. Have the most souvenirs, or the most souvenir points (depending how “advanced” you want to play), and you win. Turns very simple, players roll two dice, and if lucky, face the choice of loading a passenger (or two, depending on the dice roll) or going to a location (or two, depending on dice roll) to drop off a passenger. Each passenger dropped off is exchanged for a souvenir. In the simple version, players can simply count souvenirs, the player with the most the winner. The more advanced game sees players counting the points on the souvenir cards, which are numbered 1-4. Players who arrive at a location naturally take the highest numbered souvenir(s) available in an effort to add to their points as much as possible.

It's normal these days to read a book that highlights, or goes out of its way, to identify characters which do not fit Western demographic norms.

“Alex ran around the corner, slipping to catch his balance. Gun in hand he pushed off again, yelling at people on the sidewalk to get out of the way. “Move, move!” Ahead the thief barged forward, knocking bodies aside like bowling pins. “Stop!” Alex shouted. But the thief didn't stop. Amid cries of surprise and pain he crashed ahead toward his getaway car. Alex was black and gay and knew he had to do something, and fast...”

I exaggerate, but there are some writers who are not much more subtle. Gender, sexual orientation, race, culture—these and other facets of being human increasingly often earn spurious mention. It's clear much fiction is attempting to align with a broader cultural movement.

Before jumping further in, let's take a short step back to look at any cultural movement. Foremost, they are products of their time. Hippie counter-culture is a period in Western history, for example. With its own style, ideas, and contrasts to cultural norms, it is identifiable. And while some of those ideas live today, the hippie movement is an element of history. Hairy armpitted-women, beatnik poetry, beads, Bob Dylan, and bell bottoms are not norms. The legend of Jimi Hendrix lives on, but goats and off-grid communes just never took off.

Review of The Crying of Lot 49 by Thomas Pynchon

The human species never ceases to amaze. The past couple of years has seen the rise of Q-Anon conspiracy theories, for example. Bills Gates and Clinton having underage sex orgies while JFK Jr. is predicted to emerge from the woodwork to award Trump the presidency he “already won”. And that's just the tip of the American iceberg. Elvis lives, Area 51, contrails—and the list goes on. Why do people get onboard with such absurdity? Is the human mind so foolishly malleable? It turns out yes, and contemporary American culture is just another point in the history of humanity—so says Thomas Pynchon's 1966 The Crying of Lot 49.

The Crying of Lot 49 is a cruise on the twisting, turning road of Oedipa Maas. Likewise an aerial affair, gravity seems to have little regard for her reality. Oedipa's life takes a particularly dramatic turn one day discovering she is the inheritor of the estate of a former lover. A real estate mogul, he leaves her everything. Oedipa is given the opportunity to indulge in the wackiness of life she probably always wanted to but never had the means to. Now she does. Attracted by a reoccurring horn symbol she often sees opping up in her life, down the rabbit hole of American sub-culture Oedipa goes, and the reader gleefully with her.

Cardboard Corner: Review of Top That! 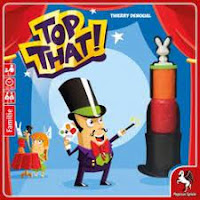 Here is a mini-Lego set. Here are the instructions. How fast can you put it together? Ok, good job. Now, if I take a copy of the same set and we start at the same time, can you put it together faster than me?  Hmm, no. I’m faster. Ok, let’s try a different set of instructions. How about now? Who is faster? Ok, you learned something—that was faster than me. Let’s try another set of instructions to determine champion of the universe!  If this sounds interesting, then definitely check out Top That! (2016).

The theme is not Lego, rather a classic magic show. In Top That! 2-4 players compete to see who is the fastest magician to put together a hat, rabbit, coin, barrel, and cup according to rotating sets of designs. Complete hand-eye coordination needed, players must stack/combine their five-piece set of components according to the design shown on the current card. First person to complete the design wins the card, and a new round starts.  First person to collect five cards wins the game. (Players can choose the target number if they want—five, ten, whatever.)

Review of The Smoke by Simon Ings

The first 100 or so pages of Simon Ing's 2021 novel The Smoke are like watching an archer shoot at a target; each arrow strikes a new location. With one of the first arrows, readers learn that the world took a new direction in the early 20th century when the Russian embryologist Gurwitsch created a biophotonic ray. This technology has since widened the gaps within our species, social class taking on a whole new meaning. With another arrow, readers get a view to life in in London's the Bund where the upper class exist, and with still another arrow a view is given to the lower class where modified humans, called Chickies, stumble about in what is left of civilization, building nests, reproducing, and scavenging for sustenance. In still another arrow, the largest from Ings' quiver, the reader meets Stuart Lanyon. A wannabe architect, his ambitions never quite come to fruition. He does, however, fall in with the daughter of a billionaire tech entrepreneur, a woman named Fel. Money and time mean little to her family, and so Fel's mother puts Stuart to work drawing and designing set pieces for her pet project, a low budget sci-fi television series. Stuart's social class not quite up to snuff, things eventually come to a head as the technology Fel's father is developing encroaches on Stuart's life, challenging him to define precisely what he wants his reality to be.

The concepts of The Smoke are as varied as the directions the novel seems to go. And yet Ings drives with purpose, keeping things contained. Gene therapy, immortality, space travel, aliens, dystopia—all would seem to be too much for one book to bear. Yet character and the human condition sit front and center. What normally appears as sensawunda in most sf books is here informative without being overbearing, tantalizing without being cheesy, and conducive rather than spotlight-hogging. There are times in the middle sections of the novel the reader starts to wonder whether Ings even needed science fiction's tool chest at all. But then the conclusion happens...

How does the 17th century German postal system sound as a theme for a board game? I imagine there is a spectrum of replies: boring, interesting, and could be interesting. If you fall into the latter two responses, continue reading. I hope the review will help you definitively answer the question.

Thurn & Taxis (2006) is a 2-4 player game in which players are trying to be the most efficient/fastest to build certain types of postal routes and upgrade their horse carriages. The game’s setting middle Europe in the 1600s, the board features approximately two dozen German, Austrian, Swiss, and Polish cities, all connected by roads and divided into various sub-regions. On their turn, players will select from the six city cards face up on the board, trying to choose locations which link up in order to build routes which connect the cities, as well as a larger network of routes to connect regions. When a minimum of three cities are linked, players can choose to complete their routes, place buildings on the appropriate cities to mark them, then start a new route. Risk inherent, however, longer routes typically provide the player more points. Then again, they also take longer to build, meaning fewer turns to accomplish other goals. Regardless, it’s player choice which predominantly determines outcome.