Through four books in Ty Franck and Daniel Abraham’s Expanse series, if anything is clear it’s that the duo are able to produce consistently quality storylines and characters that evolve in interesting, entertaining ways inherent to the pseudo-realism of the setting. I keep waiting for them to slip up, but pleasantly have had to keep waiting. Unfortunately, the wait is over.

Nemesis Games (2015) is not a cliff. Franck and Abraham have not figuratively or literally lost the plot in the fifth installment of their series. Holden still does what Holden does. The protomolecule still hovers at the edge of complete understanding. And the Earth, Mars, and the Belt still feint, bluff, and stab at one another, occasionally drawing blood. And, if pushed, I would say the book tills new ground in the fact it splits the crew of the Roccinante up, forcing them to cope with various situations as individuals, thus avoiding the chance that the series slips fully into episodic mode: what role do Holden and crew play in this week’s saving of the galaxy??? Tune in to find out…
Read more »
Posted by Jesse at 8:31 PM No comments:

One of the things Ty Franck and Daniel Abraham’s Expanse series of novels to date have done very well is to highlight the internal human conflicts which may or may not lead to physical violence. I wanted to write the words “racial tension” instead of “internal human conflicts”, but it’s a difficult thing to say given the fact the setting is in fact one big milieu of race. Belter, Martian, Terran—geographical lines not skin color are the social lines which have foremost segregated humanity on its march toward the stars, and attempts at coming to terms with a universe in which humanity is not the only sentient life. Emphasizing these social lines in a tightly confined, inhospitable setting is the Expanse’s fourth novel, Cibola Burn (2014).

According to wikipedia, Cibola is the Spanish name of the first region conquered by Vasquez on his bloody march across the Americas in search of gold. A portentous name for a novel, indeed the plot that plays out features a small but technologically advanced group arriving on the scene of a larger group of primitives. In Expanse terms, this equates to a UN scientific expedition, complete with a small security force, arriving on one of the new planets the protomolecule ring has given humanity access to and finding a small group of Belter squatters there mining lithium. Conflict erupting quickly on Inis/New Terra, James Holden (and crew, natch) are called in to mediate the situation as diplomats. Terrorist elements among the Belters and an antagonistic security leader ensuring tensions stay at peak, Holden has his work cut out for him. But pushing matters over the edge is that alien structures on the desert planet, thought long abandoned, appear to be showing signs of life.
Read more »
Posted by Jesse at 10:06 AM No comments:

Review of The Dragon's Path by Daniel Abraham

Daniel Abraham’s Long Price quartet, kicked off in 2006 by A Shadow in Summer, is a good, solid but perhaps not exceptional fantasy series that did not receive the attention it deserved. The plotting fast and loose and never quite as balanced as one would hope, Abraham nevertheless showed he had a good grip on character and character dynamics in telling the generational story of two men with differing yet common directions in life. Possessing a spin on djinns and using a unique method of communication, the series is still able to poke its nose above the herd (and remains worth a read today). But when looking where to aim his writing ship after the Long Price, it would seem Abraham looked to more familiar territory, or, as is most likely the case, unfamiliar but realistic territory. 2011’s The Dragon’s Path kicks off the quintuplet of The Dagger and the Coin series.

Reading more like historical fiction in a fictional setting than the epic fantasy one typically associates with the genre label the book possesses, The Dragon’s Path feels very realistic. If the place names were real, and the settings described as Medieval, readers could easily put themselves into an Earth scene years ago. Kings, vassals, wars, courtiers, knights, retinues, etc., the panoply (har har) of Medieval life is conveyed in representative terms—but not grimdark (i.e. excessive wallowing in the dystopia of Europe’s past).
Read more »
Posted by Jesse at 12:35 PM 1 comment: 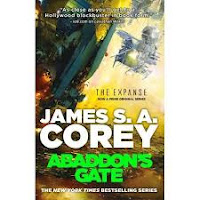 If there is anything Ty Franck and James Corey have done superbly in the Expanse series of novels to date, it is to maintain a strong sense of momentum through each of the plots. Plot devices that a lot of other writers would introduce at the beginning then string out throughout the narrative into a climax are dealt with at midway points, leaving the remainder of story to evolve in surprising ways through a new series of surprising devices and scenes. This results in stories which not only move briskly but unexpectedly, as well as entertainingly given that each subsequent revelation has been made to fit organically with the wider setting and character arcs. The series remains space opera to the core, but if anything is extremely well plotted space opera—to date. Let’s see if 2013’s Abaddon’s Gate, third novel in the series, keeps the engines burning. (Yeah, I know, bad pun. Sorry.)

Picking up events more than a year after Caliban’s War, Holden and crew traverse the system, running odd contracts. Things are going profitably for the crew when a notice arrives that the Martians want the Roccinante back. In the meantime, Julie Mao’s sister Clarissa has been plotting revenge on Holden for the losses he caused her father and family. Posing as a mechanic aboard a system ship, she spends her savings putting in place a plan that will see the tough but fair captain, dead. Bull de Baca is security officer aboard the Seung Un, formerly known as the Nauvoo. Wary of Captain Ashford’s ability to command, de Baca nevertheless goes about his business, removing the riff-raff from among the ship’s population directly—sometimes through airlocks. And lastly is Anna Volodov. A Methodist minister, she has been invited along with a host of other religious representatives aboard the Seung Un for a trip of a lifetime. It isn’t long, however, before her skills as confidante and soother of souls is needed in the face of disaster.
Read more »
Posted by Jesse at 8:52 AM No comments: