Review of The Left Left Behind Plus... by Terry Bisson

While I prefer reading paper books, the heft and feel in the hand irreplaceable, it's inevitable that in 2022 ebooks and audiobooks are likewise present in my life. If I do consume the digital side of literature, I prefer short length—10 hour audiobooks, novellas, and collections are my go-to. Seeing a short collection by Terry Bisson on the cheap in e-form, I snapped it up. The book is Left, Left Behind plus... (2009).

When I said short, I meant short. Left, Left Behind plus... is two short stories sandwiched by a solid introduction and an in-depth interview with Bisson. That's it. It's a sampler of the personal variety. Despite this, it still offers more substance than a lot of the genre fluff making its way to shops.

Review of The Lady of the Lake by Andrzej Sapkowski

Note: This review of The Lady of the Lake (1999), fifth and final volume in the Witcher series, is going to assume the reader has read the prior four books.

After four novels, we’ve finally reached the end of the Witcher novel series. It’s up to The Lady of the Lake to put the final stamp on proceedings. As with any final volume in a series, this means the impression of the entire series for many readers—the part coloring the whole.

Ramping up slowly through a series of framing scenes, The Lady of the Lake finally settles into real-time storyline. Geralt, and the group which accumulated around him in The Baptism of Fire, are in Toussaint awaiting news. Geralt is once again taking monster contracts, and on one fateful excursion learns of a plot to overthrow the Emperor. As an extra little nugget of information, Geralt learns Vilgefortz’s location, and so rushes back to his group in make an attempt at rescuing Ciri. Arriving at the castle, however, things take a left turn, leaving the fate of the group, and Ciri and Yennefer, up in the air.

Review of Bridge 108 by Anne Charnock

It’s mid-2022 and Europe’s attention is on the ongoing war in Ukraine. The topics of security, economy, and resource availability are at the forefront. But in 2017, another topic was predominantly on Europe’s screens: refugees trying to escape a (Russia-involved) war in Syria. Ethics, human rights, and cultural integration/conflict were widely being discussed and handled in a variety of fashions. Into this scene Anne Charnock published a novella “The Enclave”. Having seeds of potential, in 2020 Charnock expanded it into a novel, Bridge 108.

“The Enclave” was a window into the life of Caleb, a Spanish immigrant who lost his parents and now finds himself an indentured laborer in the hands of Ma Lexie in near-future Birmingham, UK. Lexie enduring her own tragedies, she daily sells her second-hand clothing at a cheap market in a poor enclave, Caleb her helper. In the enclave, immigrants like him are taken advantage of; life is not easy. He must look for his own bright spots, all the while enduring unpleasantries and the social limitations Ma Lexie and her associates impose on him. Caleb dreams of many things, and it isn’t long before he plots to get out of the enclave. He gets out, and Bridge 108 tells the story of what happens after.

Review of The Star King by Jack Vance

Jack Vance’s Demon Prince series is one of the more remarkable projects in Vance’s oeuvre. The five books were not written in relative succession, rather spread out over a period of sixteen years among other writing projects. But what makes them most notable is their human nature. Where most of Vance’s books tend to feature static heroes adventuring across the galaxy, in the Demon Prince books the revenge motif is taken seriously - something aking to a sci-fi version of The Count of Monte Christo. Vance gets deeper inside his main character, letting the man reflect on his loneliness and mission to kill than he does with most of his other such heroes. Setting the stage for the series is its first novel, The Star King (1964).

When just a child, Kirth Gersen watched his family and city destroyed by an alliance of five evil men, later called the “demon princes”.  His grandfather, the only other survivor, trained Kirth to be an assassin, and before dying, instructed his grandson to get revenge.  Carrying the list of names in his pocket, Kirth now makes his way through the galaxy hunting the princes, luring them into the open, and killing when the opportunity arises.  The opening of The Star King finds Gersen on a sparse, remote planet chasing information on one of the demon princes, one Attel Malagate. At a bar he meets a man employed by Malagate, but before he can extract enough info, a gang of thugs enter and put an end to his interview in decisive fashion. Kirth having a few tricks up his own sleeve, he learns the identity of the thugs and begins tracking them, hoping to be led to Malagate himself. His methods take him in the right direction but getting to the bottom of exactly which of his suspects is Malagate will require special cunning.

In my youth and into adulthood I have read a fair number of boy’s adventures—Hardy Boys, The Mad Scientists’ Club, Hatchet, Mark Twain, Treasure Island, Jack London, My Side of the Mountain, The Prince of Central Park, and many others. Big rights and wrongs, catastrophes, mysteries, becoming independent, and of course adventure, there is indeed a certain style of book that appeals to teen males. It’s therefore important to note that Robert Charles Wilson’s 2009 Julian Comstock: A Story of 22nd-Century America is precisely one such novel.

Julian Comstock is actually the story of Adam Hazzard. Adam is eighteen and a member of the working class (i.e. slightly above indentured servants but certainly below aristocrats) living in a small, Western town. He spends his days working in the barn of a local aristocrat family, the Comstocks. where he is taken under the wing of the Comstock family’s son, Julian. Unlike everyone else in his family, Julian eschews the religious rigor of the day and crosses class lines to befriend Julian. The two spend many an hour discussing religion and politics, that is, until the army comes to town looking to forcefully conscript its young men. Knowing they’ll be sent to distant Labrador to fight in long, bloody battles against the Dutch, the boys look to escape. They do, but only for a time. There comes a moment when they need to decide where to put their energy—religion, politics, and everything else around it as war rages on. 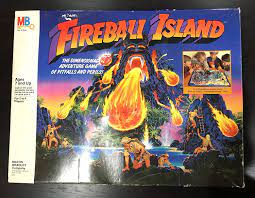 For those unaware, I am an American living in Poland. Slowly but surely, I have transported all 500+ of my CDs across the Atlantic. (Yes, I’m also a middle-aged American—a music loving middle-aged American.) Every visit to the family or business trip, I would stick a few dozen in my luggage, and eventually they were all brought here. A couple years ago I became even more ambitious: to transport my copy of Fireball Island across the Atlantic.*

For the unaware, Fireball Island’s board is a single, solid, very colorful, 3D piece of plastic about the size and shape of a kitchen sink, but with less depth. It cannot be folded neatly and transported as any other board game might. Why it can’t be folded, you ask? So the marble fireballs have sturdy ground to roll and smash you, of course.