Ted Chiang is back—one of the greatest bits of speculative fiction news in 2019. Seventeen years since Chiang’s last collection Stories of Your Life and Others, the aged-wine approach the man uses writing has finally produced enough content to fill out a collection. Named Exhalation: Stories, let’s take a look at the vintages produced.

A Chiang version of a 1,001 Arabian Nights tale, “The Merchant and the Alchemist's Gate” is the story of one Fuwaad ibn Abbas, and the encounter he has with a merchant in the bazaar one day. Passing through a gate that shifts time, ibn Abbas is never the same despite returning. But what does he ultimately make of it? Additional stories nested within his story, the whole is parables wrapped in a parable on the value of knowledge and the path to attaining knowledge, particularly the mindset regarding the passage of time and regret.
Read more »
Posted by Jesse at 8:44 AM No comments:

If the exclamation points in the titles are not enough (Make Room! Make Room! and A Transatlantic Tunnel, Hurrah!), then it’s best to note that much of Harry Harrison’s early career is characterized by gonzo writing. From the cartoonish storytelling of the Deathworld series to the antics of the Stainless Steel Rat, Harrison didn’t often delve into the New Wave of science fiction happening at the same time as his rise to popularity. But his later years did soften him, including the Eden series, an odd trilogy of novels set on an Earth where not only did the dinosaurs survive, they developed sapient intelligence in parallel to humans. Harrison followed that series up with another major deviation from course, The Hammer & the Cross trilogy, co-authored with academic Tom Shippey (credited as John Holm). Likewise looking historically but rooting itself in more realistic soil, the series looks the Vikings and Anglo-Saxons in 9th century England, and the clash for power and religion happening then.

While on paper a trope (farmboy rises to power), The Hammer & the Cross (the eponymous first volume of the trilogy, 1993) has a strong backdrop to flesh out the familiar story. Set at a time in England when Viking raids were still happening, the book features Shef, an Anglo-Saxon blacksmith slave, who finds himself living among Vikings. Religions at odds as much as cultures, he sees directly the manner in which the two sides wreak havoc on one another. And he decides to get something from it.
Read more »
Posted by Jesse at 6:49 AM No comments:

There are numerous things that people might associate with British culture, but certainly one of the larger ideas is monarchy, aristocracy, and the pomp and circumstance that goes hand in hand with place in society. Taking the piss out of this thinking in a way that only the Disc and its unique offerings can is Terry Pratchett’s fourteenth Discworld novel, Lords & Ladies (1992).

The Witches are in disarray—at least more than usual. Magrat Garlick has foregone her status as witch in order to marry king Verence in the (mini-)kingdom of Lancre. A gap left in the ranks, outsider Agnes Nitt uses the opportunity to gain a seat at the table, allowing she and cohort Diamanda Tockley to start their own coven. The coven discovered cavorting naked near a strange circle of stones, threatening to open a portal to the world of dark elves, Nanny Ogg and Granny Weatherwax decide to take action lest Magrat’s wedding be overtaken by supernatural events. The wizards, including Ridcully and Ponder Stibbins, invited to the wedding, a clash of pointy hats, kings, queens, elves, and one orangutan seems imminent.
Read more »
Posted by Jesse at 2:09 PM No comments: 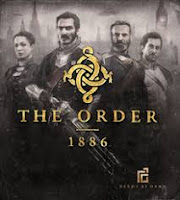 The Order: 1886 is set in an alternate-history London in which an Order of Knights, a secret society, has been in place for centuries protecting the populace from half-breeds—werewolf creatures that attack humans. Players start the game in media res as Sir Galahad, one of the members of The Order. Cold, starving, and locked in a prison cell, he is being tortured for info. Flashing back to the beginning of the actual story in the midst of his escape, the player learns London is under attack by political rebels upset at the Queen’s lack of blue-collar sympathy in the face of sooty, back-breaking industrialization. Galahad and his fellow Knights must fight off the insurgents and get to the bottom of the cabal before things turn even uglier with the werewolves.
Read more »
Posted by Jesse at 6:26 AM No comments:

Manifest Destiny. It has taken almost two centuries for the rhetoric surrounding the fulfilment of this political ideal to go beyond its initial bluster and be put in proper perspective, even as some of the opposing rhetoric has gone extreme in the other direction—premeditated program for the extermination of the native races at the hands of evil white men. Fingers today pointed in all directions, it all still comes down to the individual and their place in the situation. Enter Dan Simmons’ novel Black Hills (2010), a character study with fingers pointed at the broadest version of human history.

Black Hills is the story of Paha Sapa. Born Lakota in the mid-19th century, he is raised on the open spaces and foothills of what are now called the Dakotas. Clairvoyant, he learns at a young age that by touching people he can see their pasts and futures. Fighting in the Battle of Little Bighorn, Paha Sapa accidentally touches the dying body of General Custer and takes on his ghost. The brash, babbling general living within him for the rest of his life, Paha Sapa must learn to deal with this burden even as the white man’s world to the East overtakes his beloved homeland to the West.
Read more »
Posted by Jesse at 7:02 AM 1 comment:

Review of The Separation by Christopher Priest

If I made a list of science fiction-y writers in the world, Christopher Priest would be near the tip-top. Sublime prose, deft structure, probing ontological and metaphysical questions, intellectual engagement—books like The Affirmation, The Prestige, The Glamour, and others feature a writer who captures the art, imagination, and humanity inherently possible to writing. Continuing his run of success (and books with titles beginning with ‘The’), The Separation is both innately Priest yet something entirely fresh in his oeuvre.

Fish scales was the metaphor continuously popping into my head while reading The Separation—a strange thing considering the novel is a frame story. The book opens with pop historian Stuart Gratton searching for memoirs, testimonials, briefings—anything that can give him more information on a lesser-known British pilot from World War II named J.L. Sawyer. Having an identical twin, Sawyer competed in the 1936 Olympics in Germany alongside his brother in the coxless pairs, meeting some success. Rowing not a profitable enterprise, upon his return to England Sawyer pursued his second love in university, aircraft. Earning his pilot’s license and joining the RAF, his skills arrive just time in time for war to break out over Europe. Captain of numerous sorties over Germany, luck eventually catches up to Sawyer and he is shot down over the English Channel. Pulled from the sea by rescue craft, it is Sawyer’s convalescence which finds him trying to put the pieces, i.e. fish scales, back together.
Read more »
Posted by Jesse at 9:36 PM No comments:

If there is any difference between video games of old and new, it is the potential for immersion. Enhancements in technology now allow game developers to create ever more detailed environments that almost capture the illusion of being in the game’s world. Super Mario Brothers is fun, but it is nothing like the 3D, first-person experiences of Soma or Resident Evil 7. And this is not to even mention VR games. In short, players these days are thisclose to being the heroes or anti-heroes of their games. From apocalypse survivor to elven princess, WWII grunt to yakuza gangster, modern games are putting people in the shoes of characters like never before. Want to be a black ops operative working to stem the narcotics trade in Bolivia? 2017’s Ghost Recon: Wildlands puts you (and best played with, a handful friends) in those shoes.

Short on story, long on content, GR:W is a massive open world game filled with main and side missions in which the player infiltrates the Santa Blanca drug ring and takes out its leaders, region by region, until they arrive at the big boss El Sueno. Along the way, players will destroy cartel outposts, raid supply depots, assassinate targets, kidnap and interrogate cartel members, destroy comms infrastructure, assist local rebels, tag supplies like medicine and technology to be repurposed, hijack helicopters and airplanes, pilot gunboats—in general be a bad ass, black ops operative in an amazingly realistic rendition of Bolivia.
Read more »
Posted by Jesse at 9:10 AM No comments: