Review of Firebreak by Nicole Kornher-Stace

Everybody who reads fiction as a lifestyle comes to it for their own reasons. Plural, each reader has different appetites requiring feeding. Thus, offering the menu of Nicole Kornher-Stace's 2021 novel Firebreak is easy: are you looking for your favorite Japanese anime mmo with a layer of dystopia? Try it. The only thing missing are the pictures.

Mallory is a streamer—a mediocre streamer. Languishing amid the masses, she and her partner Jess go online to blast their way through an mmo video game called BestLife that combines elements of Pokemon, Mechwarrior, and Fortnite. They scrape by on scant donations—donations of money you assume, but no: water. In the world of Firebreak, corporations have taken full control of the US, and now fight over the pieces. The opposite of 'corporate social responsibility', they ration water while forcing the wars' survivors to live like sardines and get rich off selling their game's merchandise. When Mall and Jess get an offer from a rich sponsor that's too good to be true, they decide to respond. And into the maelstrom of corporate corruption they they inadvertently thrown themselves... 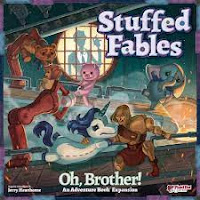 Stuffed Fables is one of my children's favorite games. Occasionally when dear ol' dad sleeps late, there have been Saturday mornings he awakes to find his son at the kitchen table in the middle of his own, custom scenario—figures, tokens, and cards scattered, figures standing and down, minions sometimes becoming friends. When I told him the news an expansion had been released, he literally squealed with joy. Let's jump into “Oh, Brother!” (2021) and see if it was worth the glee.

The little girl of Stuffed Fables is several years older and now has a younger brother. Where she was the backdrop of Stuffed Fables, he is the backdrop of “Oh, Brother!”. The two have separate bedrooms, but their stuffies still get together to drink brandy and smoke cig—ahem, sorry, laugh and play at night. The boy's two favorite stuffies are Pokey, a unicorn, and Manny, a Conan-esque action figure. It's during one of their midnight rendezvous that the stuffies notice something strange: little, mechanical bed bugs emerge from beneath the boys' bed and start stealing all of his plastic toys. The plastic being taken somewhere into the Fall, it's up to the stuffies to get to the bottom of the mystery and stop the theft.

Review of The Fifth Heart by Dan Simmons

The (imaginary) line between so-called genre fiction and literary fiction is a contentious subject for some. Literary fiction rarely makes a comment save indirectly, while a certain portion of genre enthusiasts dust off their pitchforks over perceived lack of accolades and recognition. The former tips its cap when humanist concerns make themselves known, while the latter storms “Why not us?!?!” Working with a combination of Sherlock Holmes and Henry James, Dan Simmons aims to get to the bottom of the matter—via story—with 2015's The Fifth Heart.

The grief of his sister's death not fading away, add to that the lack of book sales, Henry James decides to end it all walking the Seine one evening. But before making the jump, he is interrupted by a man. The man is Sherlock Holmes, and he has something to offer James: a role by his side in the investigation of the supposed suicide of Clover Adams. James relents, and joins the famous detective for trip to Washington D.C. and into late 19th century American history. When Moriarty rears his ugly head - as well as Holmes' past, things get serious, fast, and its up to James and Holmes to get to the bottom of the case. 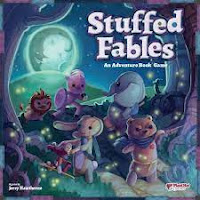 Game designers are artists. And if any proof were needed, one point would be the iterations one sees a designer’s games going through. Like a painter honing in on the best technique for capturing sunlight, we can sometimes see designers honing in on better games. Titles change, new art is commissioned, and major mechanisms can be updated. But the observant gamer still witnesses evolution in a designer’s style. One such person is certainly Jerry Hawthorne. Designer of the popular Mice & Mystics, followed by its major expansions “Heart of Glorm” and “Downwood Tales”, the player gets to see Hawthorne exploring the space of narrative-and-dice-driven action rpg games for families. With Stuffed Fables (2017), the next iteration is even better.

The castle and fields of Mice & Mystics replaced by a little girl's dreams, and the mice replaced by stuffed animals, there is a whole new world to explore, minions to defeat, and story to experience in Stuffed Fables. Board tiles also replaced, it is one of PlaidHat Games' adventure book games. Action and story occurring in a large book instead of on modular tiles, each page represents another chapter in Lumpy, Piggle, Theodora, Stitch, and Flops’ tale. An evil attacking the little girl as she sleeps, players cooperatively try to prevent the girl from waking up by sending her stuffy heroes out into the wilds of dreamland to find and defeat the source.

Review of The Speed of Dark by Elizabeth Moon

As an enthusiastic reader—ahem, bibliophile, one of the things that keeps bringing me back to story after story on the page is the ability of certain writers or books to put me into the shoes of people or situations entirely different than my own. Books like Kazuo Ishiguro's The Remains of the Day, Jonathan Lethem's Motherless Brooklyn, Mark Haddon's The Curious Incident of the Dog in the Night-time are great examples. It's not a rule that great book = reader in shoes of main character; books can focus on other elements and be successful in their own right. In Elizabeth Moon's 2002 Speed of Dark, however, it is the reader wholly in the shoes, bow knots neatly tied.

Speed of Dark is a year in the life of Lou Arrendale. A semi-uplifted autistic, Lou does not display some of the more extreme characteristics of the disorder thanks to treatments as a child, but nevertheless lives and breathes the life of an autistic. High functioning, he holds down a job as a bioinformatician at a major corporation, and has a social life both inside the firm with fellow autistics, as well as outside with the members of an informal fencing group. Lou's new boss having some edgy ideas regarding the possibilities for an untested drug for autism, Lou eventually comes to face strong pressure but also strong possibility for his future.

If Ian McDonald were an actor he would be Johnny Depp. Capable of entirely transforming himself into character—costume, voice, makeup, dialogue, etc., he switches things entirely book to book. Gangster, pirate, businessman, Edward Scissorhands—Depp becomes the persona seamlessly. Ian McDonald seems to have the same talent writing science fiction. Whether it be Jane Austen, Walt Whitman, George R.R. Martin, and several others, McDonald has been able to shape shift, successfully, through a variety of styles and forms, maintaining his own style in the process. In 2001's Ares Express we see him return to the form he adopted for his debut novel Desolation Road—voodoo sf on steroids.

A sequel of sorts, Ares Express is more a return to the setting of Desolation Road than its story. A dangerous game, McDonald changes up the magic-realist method by turning the volume on imagination up to 11, then channels it through a Mark Twain-esque adventure.

Languishing in short story purgatory for a decade or so at the start of his career, Jeff VanderMeer's name was not a well known item beyond niche readers of speculative fiction. But as the 21st century approached, VanderMeer started picking up steam, chaining his shorter efforts into complex settings, and still later, into discrete novels. Ambergris is one of this century's great, albeit small bodies of work. It was the Southern Reach trilogy and its psychological horror in the vein of the Strugatsky borthers' Roadside Picnic, however, which propelled VanderMeer into the spotlight—Hollywood even getting in on the action. Seizing the opportunity, VanderMeer followed up this mainstream success by both going back to his roots in Weird, as well as doing something a bit more experimental, a touch more artistic. The novels Borne and Dead Astronauts came of this, and while not the same successes as Annihilation et al, they certainly felt right: a writer is an artist, and therefore retains the right to do what they please with their oeuvre. This meandering path of books leaves readers wondering: what could be next? The answer is 2021's Hummingbird Salamander.

Jane is a mountain of a woman carrying with her a mountain of troubles. She struggles to come to grips with her childhood, and struggles being a wife and mother. Putting her focus into her work, in the opening pages Jane investigates a storage locker in which she finds a stuffed hummingbird. Opening a rabbit hole of murder and corporate conspiracies, Jane's troubles only worsen. Encountering extreme environmentalists and drunken taxidermists, and followed by a man she doesn't know is friend or foe, surviving the ordeal will take every ounce of strength Jane has. <cue trailer credits>

Every novelist has a debut, and some only a debut. With Bruce Sterling's 1977 Involution Ocean, one wonders how he ever got a second chance (but we're glad he did).

Straight up, Involution Ocean is not a terrible novel. With brute force, it tells of the coming-to-terms-with-self of a Flare addict named John Newhouse. His local market running dry of the drug, he and a companion agree to go to the planet Mallaqua, and there join a whaling ship to hunt the great beasts whose fluids the drug is derived from. The ship a motley crue of sailors and seamen, Newhouse finds a quiet place near the kitchen to cook his wares, and there meets an alien lady, Delusa. Romance in the works, Newhouse thereafter finds his time sailing the dust sea pulled in many directions. But when the captain's real identity surfaces (no pun intended) things go crazy, and Newhouse is forced to confront his addiction.

Review of Klara and the Sun by Kazuo Ishiguro

I hope I'll never be forced to sit down and write a desert island list of books. There are simply too many choices. But a novel I would definitely consider is Kazuo Ishiguro's transcendentally magnificent The Remains of the Day. Putting the reader into the psychological shoes of a person/character and tying a perfect bow knot, before they know it the reader is also questioning their perception of reality; the self-imposed barriers we place on ourselves are no longer sub-conscious. It is the definition of sublime. And Ishiguro's catalog has only intrigued me since. Seeing that another novel was released in early 2021, I bought it sight unseen. How does it stack up?

A fable of sorts, Klara and the Sun is the story of the Artificial Friend, Klara. At the beginning of the novel, she stands every day in her shop's window, absorbing sunlight to power her batteries, and waiting to be bought. Observing street life through the window, she comes to a limited understanding of how human relationships work. Eventually purchased by a wealthy family, Klara goes to a home where she befriends a young teen girl in very poor health named Josie. An uplifted girl, Josie shows sparkles of intelligence but her physical condition is weak at best, a situation which Klara helps her through. Getting caught up in the relationships of Josie's home, Klara must use all of her learning and understanding to help Josie through her difficult time, if she can.