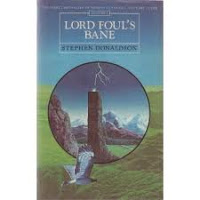 Stephen Donaldson’s opening volume in the Chronicles of Thomas Covenant Lord Foul’s Bane is, if anything, divisive for fans of fantasy.  The strict manner in which the book follows Joseph Campbell’s monomyth will see them at ease in the familiarity of the story’s development or dismayed at the lack of originality when set alongside the plethora of epic fantasy available today.  There’s also potential the parallels to The Lordof the Rings will entice or put off readers.  What’s not discordant, however, is the moral message burning at the heart of Covenant’s story.  Still poignant today, it and the relative quality of the writing are the main reasons Donaldson’s series was once king of the fantasy charts.

Lord Foul’s Bane, and the Chronicles as a whole, is portal fantasy.  Though Donaldson doesn’t identify the gateway in the opening volume, events begin and end in the real world.  The focal point of the book is Thomas Covenant.  One day discovering he has leprosy, his wife and the other townsfolk alienate him, “unclean” the word on their lips.  Encountering a mysterious beggar while paying the electric bill one day, the next thing Covenant knows he’s standing atop a pinnacle of stone, looking out over an idyllic land.  Let the fantasy begin.

Called simply the Land, the world Covenant suddenly finds himself in is fully Tolkien in flavor.  Magic works in organic fashion, the people live rustic lives, rivers wind through green hills—everything seems a caricature of what the good life was.  Most importantly for Covenant, there’s also no disease.  Though protesting it a dream, Covenant and the wedding band he still wears are declared sacred by the locals.  A great darkness swallowing the Land, he is subsequently taken on a quest to meet the great council and decide the fate of mankind.  The surreal nature of the Land overwhelming, it is Covenant’s rejection of life there which is the real engine driving the quest.

The similarities more than passing, many more of the motifs of The Lord of the Rings can be found in Lord Foul’s Bane, e.g. quests, dark lords, rings, magic, etc.  But to be fair, Donaldson’s hero is cast from a far different mold than Tolkien’s.  Precisely an anti-hero, it’s difficult to have sympathy for Covenant’s travails.  The belief he’s dreaming, and subsequently that actions have no consequences, causes him to behave in anti-social fashion and commit despicable acts.  His antics at times vile beyond belief, undoubtedly some readers will close the book forever upon reading some of them.  But for those with the patience to wait and learn Donaldson’s intent, a certain understanding does arise.  Without spoiling matters, suffice to say Lord Foul’s Bane is a very personal story that belies comparison to Tolkien only on the surface, everything below a character study of alienation and vindictiveness in the light of goodness.

In style, Donaldson proves himself a better than average writer.  There are more than a few nice turns of phrase to complement internal monologue, the descriptions are well visualized, and plot movement is smooth and consistent.  The neologisms in the Land will be annoying for some readers.  For example hurtloam as a healing earth, diamonddraught as a kind of spring wine, or the name Saltheart Foamfollower, a giant who befriends Thomas, all appear regularly.  As immature as they may seem, the word pairings are intentional as Donaldson’s aim is to emphasize the idyllic nature of the Land in contrast to our gritty real world.  He succeeds, albeit in awkward fashion.

The book’s problems lie in Donaldson’s overly predictable plotting.  Details of the story unique and interesting, the overall movement of the plot is, however, far from original. Campbell’s work taking center stage, Covenant’s quest will prove interesting for fans who read only high fantasy, his quest following the monomyth to a T.  However, for those looking for something fresh or new, Lord Foul’s Bane may not be a good option.  With each page, one can almost see Donaldson going through Campbell’s checklist, cast out of group, check, undergo trials, check, etc., etc..  Instead of being one of the few as it was when published in 1977, Donaldson’s strong effort has unfortunately become mixed up with the many faces of epic fantasy since.

In the end, Thomas Covenant and Lord Foul’s Bane will not be for everyone.  Firstly, Covenant is one of literature’s great anti-heroes, which means more sensitive readers will be repulsed by his actions.  Readers open to the context Donaldson is placing him will, however, empathize with the story and be curious how it develops.  Secondly, the thirty-five years that have passed since Donaldson started writing the series have not helped cement its originality.  Quest fantasy of the purest variety, those who have read a lot of the genre but not Covenant’s story may not find anything inventive other than Covenant himself.  To Donaldson’s credit, however, the quality of writing and world building are better than most.  It would be nice to say the say the same of the plot, but Campbell already identified the idea.
Posted by Jesse at 5:09 PM