Review of The Last Hero by Terry Pratchett 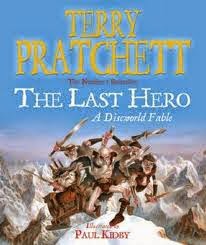 The Colour of Magic and The Light Fantastic, the first novels in Terry Pratchett’s Discworld series, starred the weak-kneed, least-likely hero Rincewind and the world’s first tourist, Twoflower.  In their grand adventure around the disc, incorrigible Cohen the Barbarian—an aged parody of the one and only Conan the Barbarian—was among the characters they ran into.  Dentures, sagging flanks, and a wispy white beard, his better years of raiding lost tombs, ravishing ladies, and defeating mighty foes in battle were far behind him.  But only in reality.  Creaky back and all, his mind was that of a twenty-year old, still set on conquering the world one monster and jewel at a time.  But Cohen remained a side character.  It is in The Last Hero (2001) that Pratchett brings the old man, and all his wild ideas, to the forefront, serving complete notice the genre has moved beyond such simplified worldviews as the Vikings, Robert E. Howard, and others’ who contrive to drag humanity back into the jungle with their epic fantasy male ultra-heroes.

In old age, Cohen the Barbarian and his raider friends have decided to go out in classic barbarian style: in a blaze of not only proverbial glory, but also literal fire.  Their goal to destroy the holy mountain Cori Celesti, they plan to reverse Prometheus and return fire to the gods in the form of a massive bomb.  Kidnapping a bard and dragging him along, they believe their last campaign is one for the ages: the bard’s poetry will etch their names in the annals of Discworld history.  By chance, Lord Vetinari has become aware of Cohen’s plan.  Problem is, the barbarian has such a head start there’s no possibility anybody from Ankh-Morpork can catch him.  In a last ditch effort, Vetinari enlists Leonard of Quirm to design a solution to the problem.  And design de Qurim does.  Utilizing the explosive power of swamp dragons, he builds a great wooden ship that, after rising into the atmosphere, will slingshot around the disc and, if all goes as planned, arrive at Cori Celesti ahead of Cohen.  The mad inventor taking Captain Carrot and Rincewind with him, the race to the mountain is on.  Question is, just exactly who will have their name appear in legend?


The Colour of Magic and The Light Fantastic playfully poked at Robert E. Howard’s Conan the Barbarian but had the larger concern of upending epic fantasy as a whole.  Focusing solely on the barbarian view, The Last Hero finishes taking the piss out of Conan and his ilk’s worldview.  Pratchett engaging with the deeper ideologies Howard presented through his stories, he challenges might-makes-right, black and white generalizations, perceiving enemies where none exist, egocentrism, as well as the dangers of giving in to such simplified perspectives.  In a scene where Vetinari presses Rincewind for knowledge of Cohen and his comrades, the reluctant wizard replies:

“... the big thing about Cohen is... he's contagious."
"You mean he's a plague carrier?"
"It's like a mental illness, sir. Or magic. He's as crazy as a stoat, but... once they've been around him for a while, people start seeing the world the way he does. All big and simple. And they want to be part of it.”

Pratchett getting a lot of mileage from the kidnapped bard and how Cohen and his cohorts bend the poor man’s ear regarding the relative merits of what make a legend a legend, its fair to say the idea of a man taking the world into his hands for his own benefit is deconstructed by Pratchett—a fancy term for what is actually very humorously done.  (The conversations amongst Cohen and his cohorts are laugh out loud at times—almost as much as the comments section of my review of Conan the Warrior.)

Offsetting Cohen’s narrative is de Quirm’s.  Presented as a progressive thinker with ideas that continually evolve what is accepted as normal, his ship running on exploding dragon fuel goes on an adventure Jules Verne would be most proud of.  Carrot, Rincewind, and de Quirm the perfect foils for one another, their voyage is filled with imagination and laughs, and is one of not only rescue, but discovery.  Together the three accomplish more than Cohen and his cohorts ever dreamed.

In the end, The Last Hero is a short but sweet offering from the Disc (only 175 pages) that examines the meaning of honor and glory as they pass through history by contrasting the classic epic hero’s desire to go down in a blaze of glory to the ideas and inventions that mark greater progress in society.  A man’s treasure is left behind when he dies, but his ‘song’ goes on.  Having more than a few pokes at organized religion along the way (the list of minor deities and the objects of their followers on Cori Celesti is belly-shakingly funny), is as funny as anything Pratchett has written and is worthy reading for the Conan crowd.
Posted by Jesse at 9:02 AM