Review of Race to the Stars ed. by Leo Margulies and Oscar J. Friend 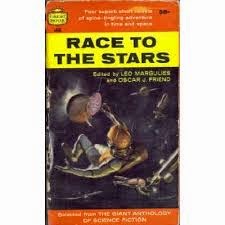 Slim science fiction anthologies now a piece of history, the idea of picking up a small book for a few cents featuring only a handful of stories is strange to a generation accustomed to doorstopper ‘year’s best’ anthologies and sprawling collections having twenty or more stories from their favorite author.  Gone are the days a publisher thought to re-print a couple of popular selections, hoping to squeeze a few additional cents from fan favorites.  Unless ebooks revive the format, anthologies like Leo Margulies and Oscar J. Friend’s collaborative 1958 Race to the Stars are a thing of the past.

Race to the Stars features four novellas, all published at least a decade prior to being anthologized by Margulies and Friend, and one nearly two: “The City of the Lost Ones” (1949) by Leigh Brackett (better known as “Enchantress of Venus”), “Forgotten World” (1946) by Edmond Hamilton, “The Time Gate” (1941) by Robert A. Heinlein (better known as “By His Bootstraps”), and “The Sun Maker” (1940) by Jack Williamson.  Each story has been reprinted at least four times since, with Heinlein’s in a whopping fifteen different anthologies or collections and re-printed in The Menace of Earth alone twenty-one times.


“The City of the Lost Ones” by Leigh Brackett is an entry in her popular Eric John Stark series. The story opening with the Burroughs-esque hero on an airboat traversing Venus’ murky skies, a disagreement with the captain forces him to abandon ship earlier than planned.  Landing in a city plagued by a strange cult, the trouble aboard ship is quickly forgotten as the hazy air and strange people of the somber city work their way into his own haunted persona.  Eventually needing to infiltrate the cult, he finds life on Venus can indeed get even stranger.  A story of freedom and oppression, slavery and society, Brackett works with familiar genre plot motivators, but adds her own distinct touch.  Namely better balanced—not completely balanced, but better balanced—gender, culture, and race assumptions, she avoids many of the trappings that plague writers like Edgar Rice Burroughs, Robert E. Howard, H.P. Lovecraft, etc.  While Brackett’s “Black Amazon of Mars” is a more coherent narrative featuring Stark, “The City of the Lost Ones” does not lack for atmosphere or mysteriousness.

“Forgotten World” by Edmond Hamilton is the straight-forward story of Laird Carlin.  Diagnosed with star sickness by his psychiatrist, she recommends a year’s time on Earth as therapy.  Though knowing the blue marble is the point from which humanity spread itself across the universe two millennia prior, Carlin thinks of the planet as a backwater—a provincial sphere lacking the cutting edge of society and technology replete throughout the remainder of humanity’s settlement.  It’s thus with strong reluctance he boards a clanky space liner and heads toward Sol.  Discovering precisely the backwards community he expected, it takes the secret plans of a local family to shake him from his interstellar doldrums and gain him a new perspective on life, and Earth.

“The Time Gate” by Robert Heinlein is one of the classic time travel stories.  Another paper exercise like his equally well known “—All You Zombies—", the story tells of the wonderfully mundane Bob Wilson and his threading the needles of time late one evening while hammering out the last pages of a thesis.  A man appearing in the room behind him through a time gate, Wilson gets angry that his work is being interrupted.  It’s when another appears, however, he notices things are getting strange.  But it’s finally accepting the fact all are versions of him that gets the story moving.  Taking (head) twisting turns through time, Wilson arrives at a place of better understanding—as egocentric as it is.

“The Sun Maker” by Jack Williamson is set in a scenario wherein Earth has been detached from orbit around the sun, and deep in the crust the last remnants of humanity survive.  Wanting to get to the surface to feel the sun—any sun—again, they struggle amongst themselves, and amongst a strange group of reptilian aliens which have emerged from even deeper in the Earth’s bowels.  Caught between a rock and a hard place, what’s left of Earthlings fight to survive.  The story overwritten, it is also the most predictable, and for this the least engaging in the anthology.

With the story synopses in the bag, it’s now time to present back cover copy for humor’s sake:

ESCAPE from the workaday burdens of this tired earth into the timeless wonders of new worlds and unborn TOMORROWS.

PICTURE YOURSELF 2000 years from now when the universe has been colonized and earth is just a good place to visit but no place to live.

IMAGINE YOURSELF millions of miles away, exploring Venus! Few have tried to penetrate the mystery of Inner Venus—fewer still have come back. But you can do it. You can have the best—the most terrifying—the most thrilling of all possible worlds in a fantastic and fascinating RACE TO THE STARS

And the deception continues.  In trying to squeeze out those last few cents, it would appear Margulies and Friend played a dirty trick on readers.  Brackett and Heinlein’s stories, both of which had previously been printed and re-printed always under their original titles (and would always be thereafter), are featured in the anthology in disguise.  Only in Race to the Stars are “Enchantress of Venus” and “By His Bootstraps” known as “The City of the Lost Ones” and “The Time Gate,” respectively.  Except for minor footnotes on the copyright page, no mention is made of this fact, leading to the strong potential readers in 1958 thought: “Oh look, new titles from Brackett and Heinlein I haven’t read yet!”  In the decades that have elapsed since the point has become virtually moot as sites like isfdb track all of this info for the discerning reader.  But in 1958, I’m sure there was more than a little disappointment for a few readers.

In the end, Race to the Stars is a brief, generally average anthology of novellas that capture something of the essence of twilight Golden Age science fiction.  Time travel, far future Earth, Earthlings stuck underground in dire straights, and a planetary adventure on Venus the bylines, the modern reader looking to dip into science fiction of old will stand less of a chance of being cheated as were Margulies and Friend’s readers in 1958, but more of a chance of being disappointed with the simplicity of yesteryear genre.
Posted by Jesse at 3:34 PM