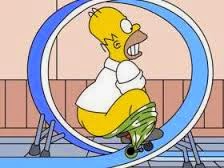 As has become an annual tradition here in Speculiction’s peanut gallery, there is a certain amount of pleasure taken in laughing at the foibles of the Hugo Award.  The 2015 situation too ripe to stand idly by, let the bombardment commence anew!

To be clear and open up front, I am neutral.  The peanut gallery standing to the side by default, I don’t have a vested interest in seeing the Sad Puppies or SJWs take the Hugo crown.  Their rhetoric is as amusing as it is sad.  What I do have a vested interest in is the field of speculative fiction as a whole, what is recognized as ‘good’, and the role the Hugo plays in this. This, in truth, is the reason for the following admission:

When people ask what I enjoy reading, there is a part of me that winces before I say: speculative fiction.  One of the main reasons for this shame is the Hugo.  The writers and books awarded the Nobel, Man Booker, Pulitzer, etc. are like vast, glorious suns compared to the cave squabble of titles ‘science fiction’s most preeminent award’ often recognizes.  A Nobel Prize winning book is normally something a person can be proud to say they’ve read.  The 2015 Hugo’s caliber of fiction is literally incomparable.  To be more blunt, Kevin J. Anderson is not a writer a respectable person can, with a straight face, say is among the top five novelists in speculative fiction in 2015.  I mean no personal offence to Anderson; he’s pursuing a career, like all of us.  But the fact the man publicly and openly advertizes himself as someone to contact should you ever want to see your first media success converted into commercially viable fiction says a lot about the underlying integrity of his work, and by default the Hugo for putting him on the ballot.  (The fact his actual writing is perfunctory at best is another thing.) To him fiction is the art of making money, not literature.  And just to prove how neutral the peanut gallery is, Ann Leckie may have gender issues sprinkled on her space opera muffin, but she too has thus far shown more interest in mediocrity than producing a sophisticated work capable of examining gender or any other issue in truly substantial fashion. It’s therefore embarrassing to count myself amongst a community which allows such writers to be lofted to such heights.  Readers of literary fiction simply do not worry about this.  (They have more detailed, intellectual quibbles.)


More frustrating is perhaps that Nobel, Man Booker, Pulitzer-esque texts do exist in speculative fiction.  No matter how consistently the likes of the World Fantasy Award, Mythopoeic Fantasy Award, James Tiptree Jr. Award (and less consistently the Nebula and Arthur C. Clarke Awards) identify works the field can be proud of, the Hugo remains intent on allowing popularity to be its guiding light toward “literary quality”.  In the modern world of rampant consumerism, this is laughable at best—the humor echoing down the corridors of this year’s ballot.

Given the clean sweep of the Sad Puppies, it will be interesting to see if there is any reaction from the awards committee in the coming year.  My guess is the award was always a popular award, and always will be, not to mention that changing the process would be giving in to the accusation of cliquishness, gatekeeping, etc.  Moreover, despite John Scalzi’s desperate attempt to rally the troops, I think non-Sad Puppy interests are too diverse to unify themselves into such a coalition.  Therefore, it’s more likely that the SJWs (many of whom seem in a state of silent shock as they digest the nominations) will abandon ship and look to “cleaner waters”, leaving the Sad Puppies the spoils of victory.

The Hugo will never die, but this year’s award nominations proved how lacking in integrity the whole concept is, how close to moribund it can get.   After all, one of the main ideas behind an award is to raise the bar for quality, not lower it.  Ha and ha. *wince*

(The image of Homer, with his pants falling down while riding the tiny bike through the loop, was used without permission. It was just too ripe symbolism to pass up.)
Posted by Jesse at 9:49 AM