Review of The Affinities by Robert Charles Wilson 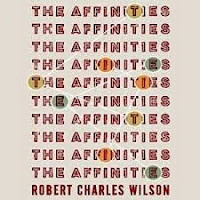 At some point in time it’s natural for a person, most likely during adolescence, to look around at their family and ask: “How’d I get mixed up with this bunch?” Genetics not automatically leading to harmonious relationships, there is indeed something deeper in humanity that allows people to get along with some better than others, regardless of blood.  Creating a new social order, Robert Charles Wilson’s simple but effective The Affinities (2015) works with this seeming paradox, ideas ricocheting around the mind, throughout.

Redefining the term ‘family,’ The Affinities works from the premise that a new social algorithm allows a good chunk of humanity to be categorized into affinities—not groups of similar personality, rather diverse, poly-compatible groups that have a good chance at “successful social engagements.”  Wilson’s sociologist in the novel locating “the boundary between consciousness and culture,” holistic collaboration becomes the key.  Twenty-two different affinities are identified, of which 60% of the population fits comfortably within one or another.  Entrance is determined by the person’s ability to suit an underlying formula for group holism, new social divisions develop and grow across North America as people come to appreciate the affinities ability to give them a true sense of family, and all the incumbent advantages.


And it’s a fascinating concept.  Original science fiction (in an age when it is so difficult to be original), The Affinities is proof that sometimes the simplest ideas are best. By redrawing demographics along lines of sub-conscious, Wilson creates a new way for things like cooperation and discrimination, nepotism and friendship, social inclusion and exclusion to viewed as they never have before.

Adam Fisk is an art student at odds to make ends meet.  Unwilling to follow in his father’s footsteps like his older brother Aaron, he’s never quite fit in with his family, and as a result has to fend hard for himself.  Taking InterAlia’s affinity test, however, changes his life.  Part of the 60% of people who can be categorized, he finds himself the newest member of the Tau affinity.  And his luck quickly changes.  The Taus giving him every opportunity to succeed, where he was jobless, he is soon putting to use his talents for an advertizing company owned by another Tau.  Where he was relatively friendless, he now has a community of people in both his city and beyond to connect with on a daily basis.  And where his love life was unstable and uncertain, he encounters women he can trust and begins to build stronger, less equivocal relationships.  But the affinities are not as trouble-free as they seem.  Rivalries heating up as more and more people are shuffled into affinities and problems within InterAlia appear, the new social order soon rubs shoulders with the very political structure that was thought to bind our society together.  Sparks, as they say, fly.

Tom Shippey titled his review of The Affinities: “Who needs a state, once we have perfectly sorted social networks?” And indeed this statement captures the overriding tension of the novel.  As with every Wilson tale, the story is firmly based on its characters.  Fisk, his family, and his fellow Tau members are the well from which the story springs.  But affecting all are the social changes the affinities bring about.  Fisk’s individual story is slightly larger than life, but the path he weaves through the “para-ethnicities and meta-nations” presents an intriguing revisioning of North American society, and for this, is as humane an examination of socio-politics as any sf novel might be.

Challenging social dynamics for better and worse, The Affinities asks: is family the group you function best within, or the group you are born into? It examines humanity’s penchant for mentally creating Us and Them, including the underlying partiality and fear.  And perhaps above all, it questions: are the social constructs we are familiar with fact or fiction?  Like China Mieville’s The City & the City, The Affinities looks at the walls, visible and invisible, we erect between ourselves, looking to see what they are built upon.  To his credit, Wilson wondrously sets the stage, then leaves it up to the reader to determine what, in fact, is viable.

In the end, The Affinities goes beyond hyperbole to be a truly interesting and thought-provoking novel on the manner in which humanity treats and views its social structures.  Facebook3, Wilson utilizes a simple social networking experiment to examine society from an angle available only to science fiction (and perhaps Philip Zimbardo).  Recreating the idea of person’s ‘family’ or ‘group’ based on social algorithms, it may indeed have the reader asking the question: “How did I get mixed up with this bunch?”  And as ever, as Paul Di Filippo points in his review, Wilson eschews "glitz and trendiness for a kind of bedrock science fiction that earns its eternal classicism by embodying human values and concerns as old as the species, no matter what futuristic trappings they wear." Smoothly written as well, like the prose of one of the Bobs (Heinlein or Silverberg), it has me looking ahead to 2015’s best.
Posted by Jesse at 7:43 AM