Review of The History of the Runestaff by Michael Moorcock 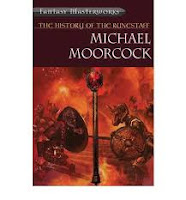 When reading China Mieville’s “50 Sci-Fi & Fantasy Works Every Socialist Should Read,” there were several titles that struck me.  I can easily see the context for Bulgakov’s masterpiece The Master and Margarita, Zamyatin’s We, Robinson’s Mars trilogy, and Rand’s Atlas Shrugged (as tongue and cheek as that selection is), but other choices less so, including Pullman’s His Dark Materials…, Peake’s Gormenghast novels, and, perhaps most interestingly, Michael Moorcock’s Hawkmoon cycle (collected in the omnibus edition The History of the Runestaff).  Mieville citing Moorcock’s satirical stabs at British imperialism as the reason, apparently the cycle has at least one layer operating beneath its shiny epic fantasy facade.

Having now read the Runestaff novels, I think it’s fair to say there is only one layer operating beneath—and it’s just an inch below the surface.

The History of Runestaff is comprised of four individual volumes: The Jewel in the Skull (1967), The Mad God's Amulet (1968), The Sword of the Dawn (1968), and The Runestaff (1969).  A mix of steampunk, sword and sorcery, and epic fantasy, the four volumes are connected linearly in telling the story of Dorian Hawkmoon as he fights the empire of Granbretan to prevent its conquest of Europe.


The players introduced in the opening book The Jewel in the Skull, Moorcock indirectly describes a dying Earth wherein some things have reverted; the armies, the forms of government, and the overall state of technology have an almost Medieval feel.  ‘Almost’ the operative word, there are likewise bits of technology and numinous objects that may or may not be magical/advanced technology left over from more “civilized days.”  The narrator’s voice 100% epic, despite the ornithopters and fire lances, the series nevertheless retains an overall Arthurian feel.

Bad guys and good guys appearing and re-appearing on the stage amidst huge battles and quests for magical objects, the mode is classic epic fantasy.  At times painfully simple and obvious (the final volume The Runestaff is almost perfunctory, not the twisting, surprising end volume one would hope for), and at others moves along lines more original, the History of the Runestaff is unable to commit itself.  Moorcock clearly and openly stating in his intro that there is no symbolism or allegory tucked away in Granbretan’s quest for domination, nor the other thinly veiled real-world references to countries and places.  Yet one would not be so quick to believe it’s all just “entertainments”—Moorcock’s word.  Fluttering beneath the “olde” English is an arch, self-aware tone that begs to be compared.  The billows of hot, epic-fantasy air, however, cannot help but float.

For this, Moorcock’s Elric stories are a relative success compared to Hawmoon.  All basically the same between the two (tragic hero, Pyrric victories, sword fights, sorcery, fantastical creatures, warring lands, etc.), it is essentially for one reason the two differ: setting.  And it makes a difference.  Gene Wolfe rendering his dying Earth of The Book of the New Sun so different as to be unrecognizable, in The History of the Runestaff Moorcock simply Medievalizes futuristic Earth to create a setting different in the details but readily recognizable in form and name, which automatically creates releationships in the reader’s mind as they read.  Clashing with the epic narrative voice, the familiarity of the places Hawkmoon’s adventures and battles take him don’t quite fit the mythic voice used to describe said adventures.  Great Britain has become Granbretan (capital Londra), Paris Parye, Turkey Turkia, and so on.  The Beatles are found in Jhone, Jhorg, Phowl, and Runga, Brian Aldiss in Bjrin Adass, and J.G. Ballard in Jeagea Blad.  The in-jokes and double-entendres may be fun for Mieville or other readers to puzzle out, but they diminish the integrity of the work, making that such antics are indeed only “entertainments,” the overall effect far from mythic.

In the end, The History of Runestaff is mediocre high fantasy/science and sorcery that contains many of the themes common to Moorcock’s work, just perhaps not in the most effective combination or presentation.  The setting and peanut gallery commentary jarring the mode and voice out of position, all else is classic epic fantasy; Dorian Hawkmoon’s adventures to reclaim the runestaff and prevent Granbretan from taking over Europe oscillate between camp and engaging, depending on the mood.  People who read only epic fantasy should be interested, all else will find only that one layer of sarcasm Mieville too found.
Posted by Jesse at 10:32 PM