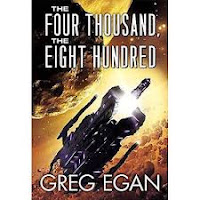 
While I originally thought the title The Four Thousand, the Eight Hundred might refer to the Pareto Principle (aka the 80/20 rule) given the proportion, it eventually became clear that Egan was presenting his own little girl vs. hundreds scenario. To his credit, however, Egan complexifies his with social issues, issues that ring pertinent, even as style and characterization remain quite straight-forward. From perceived victimhood to terrorism, immigration to disagreement regarding refugees, the The Four Thousand, the Eight Hundred fleshes out the quandary not in understandable fashion, even if more could have been done to give the human content verisimilitude.

In the end, The Four Thousand, the Eight Hundred is not a story rendered in complex style or possessing sophisticated characterization, and given the end result, some might even think it a more staged production than normally appears in fiction. But the novella does tackle some of, if not the most relevant issues facing the Western world today, particularly the situation between the Middle East and Europe. The final line is a touch maudlin, but given the harrowing events the characters had recently passed through, the sentiment is understandable, even promotable. Given that Egan has been quoted as believing its sometimes necessary for readers to have pen and paper to do their own calculations when reading his fiction (I paraphrase), the accessibility of the novella is refreshing. Thus, readers put off by the heavy science-crafting of the Orthogonal trilogy will find The Four Thousand, the Eight Hundred a return to Egan's early days of more transparent fiction, and likely enjoyable for it.
Posted by Jesse at 5:38 PM