Review of Voice from the Edge Vol. 1: I Have No Mouth, and I Must Scream by Harlan Ellison 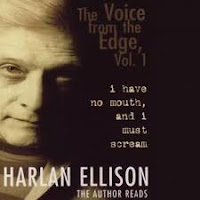 It’s no secret, Harlan Ellison is one of the most controversial writers in fiction. And the reason is clear: he doesn’t pussyfoot around opinions. Most interesting is, perhaps, that his fiction walks the talk. Some of the sharpest, most incisive speculative fiction about humanity has come through the man’s typewriter. Something like quintessential Ellison, the 2011 collection Voice from the Edge Vol. 1: I Have No Mouth, and I Must Scream, read by the author himself, portrays precisely the voice (literally and figuratively) that is so contentious, but is yet so adept at laying bare the most basic conundrums of existence. Whether you agree with Ellison’s hardline or not, the collection contains foundational speculative fiction material, and for that alone is worth reading/listening to.

Kicking things off is one of Ellison’s most famous works, the title story “I Have No Mouth, and I Must Scream”. The bizarre (emphasis on “bizarre”) tale of a surviving band of humans after an apocalyptic event, it describes the whim of a deeply cynical super-computer as their master. Ellison perfectly capturing the neurosis of the situation, madness pervades, leading one to wonder what, exactly, the computer is a stand-in for… The second story, despite being set in an entirely different setting, confirms who. More suffering, this time indirectly at the hands of a particularly regimented government, “’Repent, Harlequin!’ Said the Ticktockman,” may be the most representative Ellison story in the collection. Telling of a non-conformist and his experiences at the hands of an extreme-rote ruling body, the man’s ultimate fate in the system falls somewhere between Nineteen Eighty-four and A Clockwork Orange.


A very brief bit of Holocaust revenge, "The Lingering Scent of Woodsmoke" describes the encounter between a former German SS officer and a… person in the forests around Auschwitz who demands payment. One of the lesser known but most brilliant Ellison stories, "Laugh Track" is one of the stories whose brief description barely scratches the surface of actual content. The story of a man who continually hears a beloved dead aunt’s voice in laugh tracks for bad television sit coms, Ellison skewers the maudlin nature of most mass-market comedy, proving matters with a scalpel-edged humor of his own. Next up is “Grail”. In the introduction, Ellison states it one of his top three or four stories of all time, but can’t fathom why no one else thinks so. Having now read the story, I will side with the masses. Not a bad story, the aim and mode are nevertheless semi-conventional. About a Vietnam veteran searching for true love, his quest takes him through the occult and demons to his goal, and what he finds is surprising. The story’s goal a touch trite (finding the holy grail of true love), Ellison imbues proceedings with his wonderful voice to make the story highly readable on a line by line basis, but unable to escape the triteness at the meta-level.

In “Time of the Eye”, a man in a personal purgatory of sorts meets a most unusual woman. The woman brightening his day, learning she is blind does little to dampen his spirits, that is, until hearing her story. The end result is a little cheap, but the path to that point is superb storytelling. “The Very Last Day of a Good Woman” Later converted into an episode of The Twilight Zone, “Paladin of the Lost Hour” is a strange back and forth between two men over a watch found in a cemetery. Ultimately about the responsibility we all bear for humanity beyond our personal account, the story forms a strong ying to th yang of much of the collection, particularly:

For as innocent as the title is, “A Boy and His Dog”, the story closing the collection, is not what it would seem to be. World War III having destroyed the US, humanity is left scavenging in the ruins. War experimentation giving dogs the ability to communicate telepathically with humans, a young man wanders the American prairie with his hound Blood, searching for food and sex. Encountering a lone woman in a ruined gymnasium one evening, however, changes everything. Escalating to the (juxtaposed) bizarre and back, this story is one of the darkest, most nihilistic perspectives on humanity I’ve ever encountered in fiction. Cute and cuddly dogs can be, but in this case the metaphor has teeth.

Ellison received awards for a few of the stories in this collection, but not always for the best stories. But that is all arguable, of course. Beyond awards, it is a highly representative collection of Ellison’s strengths as a writer. From madcap to estranged, always, always the narrative voice carries the day.

The following are the nine stories collected in Voice from the Edge Vol. 1: I Have No Mouth, and I Must Scream:

I Have No Mouth, and I Must Scream
"Repent, Harlequin!" Said the Ticktockman
The Lingering Scent of Woodsmoke
Laugh Track
Grail
The Time of the Eye
The Very Last Day of a Good Woman
Paladin of the Lost Hour
A Boy and His Dog
Posted by Jesse at 8:55 AM