Review of The Deathbird and Other Stories by Harlan Ellison 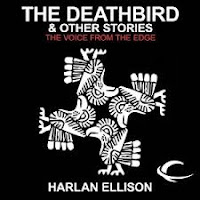 There are few writers in speculative fiction who have proven themselves as long-lasting as Harlan Ellison. An award nominated and winning career spanning five decades, the audiobook collection of his ‘best’ stories now stretches to four volumes. Voice from the Edge Volume 4: The Deathbird and Other Stories brings together the renowned stories from the latter phases of the author’s career. Unavoidable, Ellison’s unique narration stands front and center, and, as with the other three volumes in the Edge series, fully complements the original written material.

Autobiographical fantasy, the opening “story” in the collection, called “Ellison Wonderland”, likewise doubles as the collection’s introduction—or at least an imaginative glimpse into the mind (madness?) of a/the writer. Interesting enough (no coincidence intended), the story closing the collection, “How Interesting: A Tiny Man”, also contains strong elements of autobiography. The story tells of a man who creates a 5-inch homunculus for his own pleasure, and the eventual public backlash (predominantly from conservative viewpoints) against the little guy. The tiny man purported to be a product of the devil rather than an individual right to create and own, Ellison, as he has done throughout his career, sets a major component of the establishment in his crosshairs to delightful, and dare I say upon the conclusion, sympathetic effect (*sniffle*).


The collection truly kicks off with the title story. Simply one of the tip-top works of Ellison’s career, “The Deathbird” is fictional, metafictional, experimental, and delightfully challenging material with mortality and fundamental ideas regarding existence at its core. Any further description is almost futile; it needs to be experienced to be known. More a vignette than story, “The Creation of Water” is a prosaic piece that offers the perfect calm before the manic storm of “Run for the Stars”. Possessing the vim and vigor of Alfred Bester, “Run for the Stars” is the earliest published story in the collection, and one of the earliest in Ellison’s career. A last man on Earth story with an anti-hero twist, the pages burn as the man defies his fate in the face of an alien horde. While certainly Golden Age at its roots, the novella indicates sf was ready to move on to fresher pastures.

A highly evocative yet dark view to human nature, “The Beast That Shouted Love at the Heart of the World” fully embraces humanity’s vices as a weight balancing its virtues. Allusive and poetic, it showcases the depth of Ellison’s talents. Cthulhu in prose Lovecraft could only dream of, “On the Slab” is set in Rhode Island (natch) and features the discovery of a 30-foot tall, dead humanoid. Displayed on stage a la King Kong, Ellison drives to the heart of Lovecraft’s mythos in a brevity of precise language. Rooted in a Shakespeare quote, “Count the Clock that Tells the Time” is about a middle-aged man who realizes he has done nothing, absolutely nothing with his life. Deciding there’s no better place to start with his bucket list than a lifelong dream to visit Scotland, the man puts a plan in action, and two years later arrives in the highlands. Overlooking a loch, his trip, in fact, is only beginning. A rather straight-forward story from Ellison, it is delicate fantasy with a very human core, nevertheless.

A mini storytelling tour de force, and another one of the best of Ellison’s career, “The Man Who Rowed Christopher Columbus Ashore” is a collection of flash fictions centering around a man who goes around the globe serving up instance justice, god-style. The mini stories serve, however, to contextualize the final three stories, and indeed, good and evil itself. The overall story very atypical in structure, but remains fiction of the purest, most humane. A vivid, allegorical piece, “Croatoan” sinks into the subterranean depths of NYC’s sewers, where fetuses ride crocodiles, and symbolism reigns supreme. Addressing the seemingly fatalistic cruelty of the world, “The Whimper of Whipped Dogs” tells of a woman who witnesses a murder, and the fate awaiting her under similar, voyeuristic circumstances. “Killing Bernstein” tells of a toy company manager who murders a female colleague. Also an ex-lover, when she shows up at the next day at work like nothing ever happened, the man starts to doubt his sanity.

Perhaps the only thing better than an Ellison story is Ellison reading an Ellison story. Making clear that the voice in his head while writing is perfectly translated to the page (something I daresay the majority of writers cannot do), listening to Ellison narrate his own material is pure joy. Adding a layer of depth only partially available to the black and white words on the page, the collection comes recommended.

The following are the thirteen stories collected in Voice from the Edge Vol. 4: The Deathbird and Other Stories:

Ellison Wonderland
The Deathbird
The Creation of Water
Run for the Stars
Croatoan
The Beast That Shouted Love at the Heart of the World
On the Slab
The Man Who Rowed Christopher Columbus Ashore
The Dreams a Nightmare Dreams
The Whimper of Whipped Dogs
Killing Bernstein
Count the Clock That Tells the Time
How Interesting: A Tiny Man
Posted by Jesse at 6:14 AM