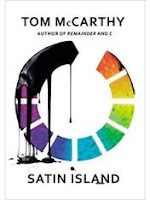 Where o’ where, and how o’ how, I kept asking myself while reading Tom McCarthy’s 2015 Satin Island, is this novel going to tie itself in to its title?  A Joe Anybody corporate guy leading the way, his relatively mundane job, his obsessions with common media headlines, his standard work travel, his quotidian rendezvous with a girlfriend, his attempts to contextualize himself in this mix—nothing seemed related to textiles or archipelagoes.  But in an instant—a homophonic miscollocation—the title coalesced, then recoursed through the novel, making everything clear, or more precisely, clearly unclear.

Capturing the skew, the kilter of 21st century “reality”, Joe Anybody (who asks the reader to call him U) works for the Company.  His office in the basement among ventilation shafts and blank walls, U is tasked by his motivational speaker cum CEO with the Great Project: to define contemporary anthropology—to unlock the logic underpinning present-day Western social behavior.  Using his formal training as an anthropologist as launch point, U digs into headlines and observes humanity with a strange, detached inititiative.  Even stranger is the positive response he receives from peers and others in business as he travels around the world, presenting his work to date.  Though U himself only distantly feels it, there doesn’t seem full cohesion of his project and the world beyond…


Satin Island opens on a delicious nod to McCarthy’s debut, Remainder (U sits in an airport in Turin, delayed due to some crazy airplane disrupting flight patterns over Europe).  And the nod seems appropriate: Satin Island is likewise about a disparity (an idea captured by the not fully completed circle on the cover, one of the covers of Remainder, and the overtly titled novel C).  The relationship of life to art set aside, Satin Island cuts closer to the bone by looking at the subjectivity of reality in the contemporary age.  Rather than drawing lines tighter between the abstract nature of art to the exigencies of existence, McCarthy takes more concrete aspects of 21st existence and deconstructs them into to a pool of un-knowledge.  But the tool used to perform this deconstruction is not individual perception.  Instead, McCarthy uses the subjectivity of social perception, particularly the delusion which can result from mass belief or understanding.  Religion obviously a dead horse for McCarthy, he focuses instead on far more commonly accepted realities of modern life, thereby making the novel significantly more relevant.  The workings and actions of corporate work, the clearly worded yet fuzzy purpose of major business projects, the daily grind of commerce in the 21 st century—these are the “abstract religions” MCCarthy digs his spurs into.

Strong commentary on contemporary Western existence, particularly the manner in which business and commerce tilt perception away from a more traditional or pastoral view to reality, Satin Island addresses the disparities within corporate worldviews—something Dan Hartand appropriately calls a “satire of late capitalism”.  The language bouncing around between blocky and fluid, precise and generalizing, it resolves itself in an oblique twist that, as mentioned, literally satisfies the title.
Posted by Jesse at 8:53 AM