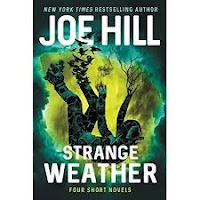 As that thimbleful of regular readers will know, I am largely dismissive of horror.  There are books that buck the trend, for certain, but generally I find it’s a restricted scene.  As such, there are many writers who go in one eye and out the other when looking at lists of upcoming publications, best ofs, or recommended reading lists.  Despite never having read anything by him, Joe Hill was one such writer.  But then I read “The Devil on the Staircase” in the anthology Stories: All New Tales.  Experimental in form and mythopoeic in substance, it’s a superbly written human story that made me ask myself whether I’m missing out on something by not reading Hill.  When his 2017 collection Strange Weather popped up on an upcoming publication list, I took the chance.  More than just the best collection of the year, I’m thinking of putting it as my best book published in 2017…

A small collection in terms of quantity (only four stories), Strange Weather remains substantial given all are novellas (the collection totals 400+ pages).  In each, Hill wonderfully combines engaging storylines, tightly defined characters, relevant commentary on contemporary social and political issues, and meaningful outcomes—pretty much everything that tickles my reading fancy.  I would have to go back through my library, but suffice to say it’s been a while since I read a collection that was of such consistent yet dynamic quality.


Borrowing a page from Australian Aboriginal beliefs (i.e. that photography steals a part of the soul), in the first story in the collection, “Snapshot”, Hill tells the story of an obese 13-year old boy in the 80s named Mike who is called to help his former babysitter, an elderly woman now suffering from Alzheimer’s.  The shoeless, delirious woman showing up on his doorstep one day, she warns Mike about a man with a Polaroid, and not to let him take any photos.  Mike running into a strange man with a Polaroid a day later, all hell breaks loose involving neon-blue slushies, thousands of dead sparrows, a glitter gun, and a heart wrenching look at memory loss.  If there are any faults to the story, it would be that it goes on for a few too many chapters (and that Wil Wheaton does an absolute shit South African accent, but that’s not Hill’s fault).  Other than that, the way Hill potrays memory loss through fantastical metaphors is superb.

The best piece of fiction I’ve yet to read on guns in America, “Loaded” looks at a handful of people living in Florida circa 1993 who are all affected by the point-and-click death mechanisms.  A blonde floozy, a mentally-unstable war veteran, a thespian teenager, a good ol’ boy chief of police, a diligent reporter—these people’s lives clash in dramataic fashion as a result of guns.  A hard, visceral story, there are a couple of gut-wrenching scenes that were difficult for me, a reader with thousands of books under my belt, to read.  But it reflects reality.  A story that almost literally comes from American headlines, Hill truly forces the reader to think about guns and their function in society.

A story that begins normally then suddenly twists sideways, “Aloft” examines a meek, anxious man named Aubrey who is looking to be a more active participant in life after the death of a close friend.  The woman taken by cancer, she tasks Aubrey and their circle of friends with completing her bucket list.  Aubrey’s anxiety runs high, but he agrees to go skydiving.  He makes the jump, and that’s when things go sideways.  A literalization of a common idiom, “Aloft” is the most personal story in Strange Weather, and one that is likely unforgettable due to the imagery and character resolution.

Commentary on the relative state of chaos in the current social and political environment of the US, “Rain” is the story of a young woman whose life is interrupted by bizarre storm.  Delicate metal needles pour from the sky, marching a path of destruction from Boulder to Denver, killing thousands.

“The operating theory—lacking any other credible explanation—was terrorism. The president had disappeared to a secure location but had responded with the full force of his Twitter account. He posted: “OUR ENEMIES DON’T KNOW WHAT THEY STARTED! PAYBACK IS A BITCH!!! #Denver #Colorado #America!!” The vice president had promised to pray as hard as he could for the survivors and the dead; he pledged to stay on his knees all day and all night long. It was reassuring to know our national leaders were using all the resources at their disposal to help the desperate: social media and Jesus.”

The woman’s girlfriend among the dead, she takes it upon herself to take the overland trip to inform her father, and encounters all sorts of people and perspectives along journey.

In the end, Strange Weather has officially and emphatically removed Joe Hill from the list of writers I automatically overlook.  (Not something I can say about Hill’s father…)  It’s great that Hill doesn’t seem to think of himself as a writer of a certain breed.  Unlike a lot of fiction these days, his stories are built around characters and situations rather than tropes or settings, any genre elements feeling either incidental or organic.  Though only four novellas, each is focused (with the exception perhaps of “Rain”), specially crafted, singular, and balances plot-oriented fiction with a human agenda—Alzheimer’s, guns, media, and number of other ideas are brought to life through sharply defined characters and deft prose.  Each story may have only one word as its title, but there are certainly more complex ideas being discussed beneath.  Best book of 2017?  I’ll let the honeymoon glow pass then make up my mind—but certainly in the running…
Posted by Jesse at 7:54 AM