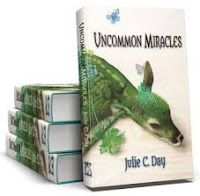 There it lies, a deer, spotted and innocent. It seems to have just settled down for the evening, perhaps in tall grass or leaves in the forest. Perhaps other deer lie nearby. It is a clearly recognizable thing, its posture, its form. But the jade green fur? It appears so natural to the eye, like with any deer. And yet the brain knows it is not, leading us to pause, then think. Such is the delicate power of the stories in Julie C. Day’s 2018 collection Uncommon Miracles.

In single-author collections I assume the author themselves played the greatest role in selecting the sequence, which in the case of Uncommon Miracles means a post-apocalyptic story wherein women become pregnant with rabbits via Immaculate Conception sets the tone. “Everyone Gets a Happy Ending” matches the cover image: at quick glance things appear genre ordinary: post-apocalypse, cross-country trip, shortage of supplies, etc. But pregnant with rabbits? That is the figurative jade green fur, and leads the character to reflect on the nature of pro-creation and existence, and likely the reader.

The small difference in reality leading to a larger shift in perspective for the main character of “Everyone Gets a Happy Ending”, the story likewise offers a taste of things to come in terms of individuals’ paradigms. For example, “One Thousand Paper Cranes” tells of the teenage, inner-city children of a drug addict. Day unflinchingly presents some the tangible realities such teens face, juxtaposing them against the hope that flickers in their peripheries. Ending on a magical moment, the tectonic plates of their lives, shift. In perhaps the most ostensibly fantastical tale in the collection, “The Re’em Song” tells of unicorn bone traders, the bloody and blood-dependent region they live in, and the major changes breaking with tradition brings to their lives. A very dark riff on Little Red Riding Hood, “Raven Hair” tells of a different sort of girl, a less passive variant, who visits the big, bad wolf, and takes the story beyond the woodsman.

Another tale looking at paradigm shifts, “Idle Hands” is a bizarre combination of asexual reproduction, parallel universes, and heroin addiction that looks at chemical dependency in an allegorical, transitive light. A black widow story, “Level Up” is about a woman named Tara who experiences life and sex the hard, defensive way, but ultimately learns something she can take forward. A story of betrayal, in “Pretty Little Boxes” Day projects the fragility of holding, having, and releasing sadness onto a troubled relationship. The couple’s tension balanced by the iridescence of insect antennae and chitons, it is another strange yet strangely affecting tale from the collection. “Faces between Us” is a love story about two young people in rural Oregon. The pair’s hopes intermingle with redneck habits and snorting the ashes of the dead, making for an atmospheric, evocative, and quicksilver good story.

Another major theme of Uncommon Miracles is loss. Poignant (sans anything resembling drama let alone melodrama), “Woman in the Woods” tells of a brother and sister who lost their mother, the ether of memory, the strength and sadness of hope, and makes for one of the best stories in the collection. Another story about the loss of a family member, in “A Pinhole of Light” Day parallels the ideas of ghosts and people in photos. Living beyond death in pictures, the main character tries to regain/retain normalcy with the family he has left. In “Holes in Heaven”, a bitter, handicapped hoarder lives in subsidized Arizona housing. His parents having ascended to live elsewhere in the solar system, he spends his days on Earth in envy of his NASA-whiz brother while making as big a mess as possible in his own life in order to get kicked out of his apartment. Though getting the fight he wants, it may not be the ultimate battle he desires.

Day’s writing style is no nonsense yet lock tight in terms of thematic focus; one of the real joys of the collection is its skipping stone solidity. Showing a sophistication the majority of her peers do not, several of the stories break freely from the mold of standard storytelling to positive effect. Framed as a grant application, “The Thirteen Tuesdays of Saint Anthony” looks to a small Massachusetts town which has been abandoned by its patron saint. Suffering abound in the town, some of the leaders believe an art project will appease. The atypical form, while engaging in itself, likewise makes the story’s ultimate resolution all the sharper. “Mourning Food: Recipes Included” is outwardly an article or magazine piece telling of the success of three elderly Polish sisters in the kitchen. A layer deeper one finds a synesthesia of food, flavors, and emotions, and ultimately the personalities of the three sisters.

YA fiction that is more sophisticated than a lot of ‘adult’ fiction these days, “Signal and Stone” is the story of a 14-year old girl who makes a mistake with her cell phone and pays for it on social media in ways that millennials understand all too well. Needing to get off the grid, she and her mother go to the island of Vinalhaven, and it’s there she learns how to rid herself of the ghosts that haunt her (in strongly allegorical fashion).

As can easily be discerned from the review thus far, Uncommon Miracles is a wonderful collection of short stories that will likely not be on many people’s radar but absolutely should be. Day has quietly but steadily built a small oeuvre of intelligent, quietly rebellious, and inclusive short fiction wholly deserving of a place on next year’s World Fantasy Award ballot, not to mention the shelves of discerning genre readers. The focus is never the fantastical—the wow factor many mainstream genre readers are looking for these days, rather, the supra-natural elements are used in more sophisticated, theme-informative, sometimes metaphorical fashion. There are witches, parallel universes, unicorns, etc. but the characters and the particulars of their lives—highs and lows, issues and discoveries, circumstances and transitions—are the focus, making for a dynamic yet cultured collection bolstered by vibrant, affecting bits of fantastika. Day’s range is truly superb. From the pitch-perfect cover, through the minimalist prose that etches meaning in incisive fashion, to the intellectual and emotional meaning nested inside every story (like a jade green deer lying down for the evening in the forest?), this collection is a real winner.


The following are the eighteen stories included in Uncommon Miracles:

Everyone Gets a Happy Ending
The Woman in the Woods
A Pinhole of Light
One Thousand Paper Cranes
The Thirteen Tuesdays of Saint Anthony
Raising Babies
Holes in Heaven
Florida Miracles
Mourning Food: Recipes Included
The Faces Between Us
Idle Hands
Finding Your Way to the Coast
Level Up
Pretty Little Boxes
The Re’em Song
Signal and Stone
Raven Hair
I Want to Be Here
Posted by Jesse at 6:55 PM