Review of Distrust that Particular Flavor by William Gibson 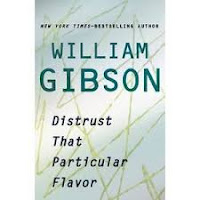 I imagine there are many readers who came to the work of William Gibson long after he had made a name for himself, only to be disappointed. The hype did not match the fiction. And yet for those readers, I would guess the stories linger longer than they expected. Some fundamental understanding, some raw human relationship to technology and culture was present in Gibson’s novels in ways they may not have consciously realized. Bringing that understanding to the surface is Gibson’s 2012 collection of non-fiction Distrust That Particular Flavor.

A myriad, Distrust That Particular Flavor delivers a wide-wide variety of writing. Not only essays, the book likewise collects speeches, magazine articles, newspaper copy, interviews, autobiography, book introductions, travel pieces—all from such disparate sources as Wired, The Observer, Forbes, Rolling Stone, New York Times Magazine, The Whole Earth Catalog, and many others. Covering a span of approximately sixteen years, the twenty-six pieces of non-fiction are all short yet profound in some fashion; the quiet intelligence and insight into human existence underlying Gibson’s novels is here openly revealed for what readers have suspected all along.

In many ways, we look to writers to put into words things that we know to be true but can’t quite articulate as metaphorically or accurately as they. One can visit a place or city, for example, and get an impression, but it’s the (good) writer who can convey or contextualize those feelings or reactions in concise, meaningful fashion. Gibson does precisely this throughout Distrust That Particular Flavor. Whether it’s his perspective of Singapore after a brief visit or Japanese culture, introduction to the work of Jorge Luis Borges, the global transition from analog to digital, the intentions or lack thereof of technology, or simply the human desire to have stuff, Gibson’s eye to detail to reality and ability to deftly describe it (always relayed in the most telling yet minimalist lexicon) is fascinating. Based on this, it’s possible to argue that Gibson’s non-fiction may in fact be the root from which his reputation as a socio-techno guru is derived.

But more than nimbly defining aspects of human existence as of the beginning of the 21st century, Gibson likewise offers insight into areas and offers connections to things that most people may not have taken the time to think about or link together. Gibson is famous for saying “The street will find its uses…” (essay included), but beyond this, Distrust That Particular Flavor contains a multitude of further insights, from counter-culture generation evolution to hipster cool, ebay culture to Japanese film, surfing the web to how the future is indeed now. Through these and other facets, Gibson’s “outsider” view, or at least end to end view of the slow infiltration of technology into society, provides a perspective the modern young person empirically cannot have.

All in all, and regardless whether you’ve read Gibson’s fiction or not, there is a wealth of insight into life at the turn of the 21st century present in Distrust That Particular Flavor that is invaluable to the Western world. As technology weaves its way ever deeper into culture, society, and the human mindset, Gibson is there to put some perspective on it. Vinyl records may be outdated, but the majority will far, far outlast the lifetime of most digital albums—something which Gibson further contextualizes in terms of mindset and outlook and without dipping into maudlin nostalgia. If you have read Gibson’s fiction, Distrust That Particular Flavor is likewise invaluable in helping understand it—the motivations, the themes, the seeming fascinations, all are spelled out in a direct fashion the books do not offer. A quick, dynamic read, the table of contents is relatively lengthy but the overall content is little more than 200 pages, meaning a lot of bang for the buck—spark for the bitcoin? (Sorry, bad joke.)

Essays, comment pieces, presentations, speeches, etc., etc., the following is the table of contents of Distrust That Particular Flavor:


African thumb piano
Rocket radio
Since 1948
Any 'mount of world
The baddest dude on Earth
Talk for Book Expo, New York
Dead man sings
Up the line
Disneyland with the death penalty
Mr. Buk's window
Shiny balls of mud: Hikaru Dorodango and Tokyu hands
An invitation
Metrophagy: the art and science of digesting great cities
Modern boys and mobile girls
My obsession
My own private Tokyo
The road to Oceania
Skip Spence's jeans
Terminal city
Introduction: "The body"
The Net is a waste of time
Time machine Cuba
Will we have computer chips in our heads?
William Gibson's filmless festival
Johnny: notes on a process
Googling the cyborg