Console Corner: Review of Shadow Tactics: Blades of the Shogun 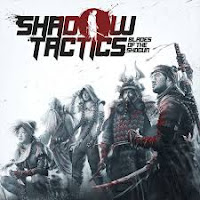 I think it’s fair to say ninjas are a fascination of the West. Silent, acrobatic killers, masked, and wielding a variety of neat weapons and tools, they appear in all forms of media: books, movies, comics, tv, and beyond. And they are perfect for video games. From the early 2D action-platformer Ninja Gaiden to Sub Zero, Scorpion, and Reptile in Mortal Kombat, Shinobi 3D to all the games which feature the famous mutant, pizza-devouring turtles, ninjas have been captured in a variety of forms. But for all the games which have appeared, none seem to have captured their true aura. The original Ninja Gaiden and its later reboot perhaps coming closest, those games’ focus is heavily action, however, which prevents ninjas from being the sneaky, rooftop-crouching, bush-hiding, masked assassins. But the situation has been rectified. Combining action and stealth in an interactive environment that drips ‘ninja’ is Mimimi’s 2016 Shadow Tactics: Blades of the Shogun.

Set in feudal Japan, the storyline of Shadow Tactics is quite straight-forward. The new shogun, tired of ongoing rebellion in the provinces, sends a crack team to destroy the rebellion from within while making his military assault on the front. Players take on the roles of the five characters in that team (depending on the mission) and need to deploy the special skills each has in order to accomplish the missions’ objectives. Hayato has sword and shuriken, and can distract enemies by throwing stones. Mugen the big samurai can kill multiple enemies with a single swing of his katana and lure unsuspecting guards with a bottle of sake. Yuri is a small thief who can set traps and lure enemies (a la the Pied Piper) with her flute. Aiko is the master of disguises and has a sneezing powder that temporarily blinds guards. And Takuma is an elderly gentlemen good with gunpowder, including his marksman’s rifle and various explosives. Together, they help the shogun get to the bottom of the cabal and put an end to the rebellion. Trouble is, the rebellion may be closer to home than he realizes.

Core gameplay of Shadow Tactics is guiding the characters across various maps and disposing of enemies to fulfill the missions’ various objectives. A top-down isometric view (with controllable camera), the maps include a fort, river road, noble’s palace, city, temple, and many other locations (thirteen total), all of which have been carefully laid out and filled with guards and samurai to prevent you from achieving your objective. Hiding in bushes, running along roof eaves, breathing through straws underwater, creeping up behind enemies, luring guards with footprints in the snow, climbing walls, jumping into empty barrels to escape detection—these are just some of the options the player utilizes along with their special abilities to proceed.

And these options lead to the core of the game: tactics. In what is a semi-sandbox experience, the game’s maps are open and varied, meaning players are able to make their own paths toward the objectives. Completing a mission and then going on youtube to see how somebody else has done it always results in different runthroughs. In some of the missions, developers have even built in story-based options for completion. In one, for example, players have the choice of setting up their target for a sniper shot or poisoning his tea, the tail end of the mission playing out depending on the choice. In another, players have the choice which area, a tavern or courtyard, where they will eavesdrop on the enemy. It means that players can scout ahead and choose the option that looks best, and alternatively, switch to the other option if the going gets tough in the first. Overall, the game is a wonderful combination of possibility and limitation in which the player almost has agency in choosing how to go about achieving the mission’s goals, yet does not feel so free as to break loose from the underlying story or gameplay. Long story short, design is superb, opening mission to final moment.

Indeed, game design is well-thought out. Map design is one thing, but so is overarching progression. Not dumping all the characters with minimal explanation onto players at the beginning, developers instead introduce the characters and their special skills through gameplay and story. Players start with only Hayato, are told how to use his primary skill, given a chance to utilize it, then introduced to his secondary skill. A short time later, the second character Mugen is introduced, along with his primary skill, then later secondary. It isn’t until the end of the first mission that the player is introduced to the third character, and it isn’t until the third mission that they meet the fifth and final character, and it isn’t until the fifth mission that all the characters’ abilities have been revealed, and even then, some of the later missions offer one-offs—special abilities possible only within single missions. Alongside this, an ever-expanding number of interactive environmental elements are introduced, for example movable rocks, underground passages, extinguishable torches, etc. All in all, players are slowly immersed into the world and gameplay to the point that, before they know it that they are utilizing its most sophisticated mechanics. I simply can’t compliment game design enough.

But the game has a couple missed opportunities. By far the biggest is the lack of co-op, especially couch-co-op. Games like Lost Vikings and Trine successfully implemented multi-player in tactical-action environments with variable player powers, and I don’t see why Shadow Tactics couldn’t have also (save, of course, budget limitations, which is likely the reason, and is understandable). Gameplay strongly lends itself to co-op yet is unavailable, unfortunately. It would have been no bother to wait 5-10 minutes while my friend sneaks ahead to take out an enemy solo. I would be too caught up in tactics with them to complain I wasn’t the one in control, and soon enough it would be my turn again, anyway. For the times synchronized strikes are needed, successfully coordinating them with another person would have been even more satisfying than it already is. (Mimimi, if you happen to be reading this and are in the process of making Shadow Tactics 2, I understand you probably didn’t have the budget for this game, but if you can find it for the next, please implement local co-op.) The second missed opportunity is far more minor: a button option that allows players to scroll through enemy viewcones. As it stands, players must move a cursor around on the screen, placing it in front of an enemy to see their viewcone. When multiple enemies are standing close together it can be tedious to get the cursor in the right position to see the desired viewcone. Being able to scroll through them manually would be a nice, but not critical benefit.

As hinted in the introduction, I think it’s fair to say Shadow Tactics: Blades of the Shogun is now the gold standard for ninja games. Throwing stars, samurai swords, masked intruders, deadly traps, sneaky assassinations, martial combat, epic plotline—the game possesses all the elements of what a player expects in a comprehensive ninja game, and combines them in manner that is extremely fun, intelligent, and challenging. The player is even given the option for Japanese voice overs, which is much appreciated. The perfect blend of stealth and action, not to mention art and design, the player will truly feel like a ninja crawling through the bushes and along rooftops to take out enemies. It is also one of the most addictive games I’ve ever played. Games like the Uncharted series, Tomb Raider, even Witcher 3 I could turn off relatively easily as the evening’s hours drew long (the latter of which because I knew I still had 50 more hours of gameplay ahead), but with Shadow Tactics it was extremely difficult to put away. It’s past midnight, I have work early, but still, just one more enemy takedown, one more short section, one more mission checkpoint… Great game worthy of more attention.