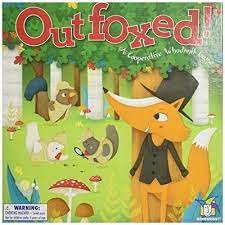 Imagine sitting down to do a list of 25 of the following questions: X + 4 = 6. What is X? 3 – Y = 1. What is Y? It’s boring—educational for those whose math skills are still acquiring such logic, but eventually still boring. It’s so much better to use realia. We know there were six apples, and Sally ate three. How many did Johnny eat? But what’s even better? Answer: Sherlock the Fox chasing down a pie thief before he escapes. Helping small minds develop deduction skills in simple, accessible, and delightful fashion is the game Outfoxed.

In Outfoxed, one to four players take on the role of detectives, working together to discover which fox stole the pie. Choosing to either reveal suspects or search for clues at the beginning of their turn, players will roll dice to see if they are successful, and if so, have a chance to peel back a layer of the mystery. Fail with the dice, and the thief moves one step closer to escaping with the sweet treat. Once players believe they have enough clues and suspects to deduce who the thief is, they can risk it all by guessing. Guess right, and you win. Guess wrong, and the real culprit escapes to steal another pie.

The magic of Outfoxed lies in the manner in which the designers matched clues to suspects. Individual clues are items of clothing, or jewelry, or some bodily apparel, and each of the suspects is wearing a combination of them, with no two alike. Revealing that the thief had an umbrella doesn’t mean Gerald is guilty because he has an umbrella, only that any fox with an umbrella is a suspect, of which there may be three or four. By the same token, however, any fox without an umbrella is not the culprit, the field of suspects narrowed down. It’s this negative-space deductive element to the game that really shines. After all, it’s easy for kids to associate clue X to suspect 3, but it requires lateral thinking to disassociate clue X with suspects 7 and 9. Better yet, bouncing back and forth between these two modes of thought is yet a third ability that children must apply in the game. (I should add a note here that the plastic device which allows the detectives to learn what the thief is wearing without giving away their name is wonderfully and cleverly analog.)

Outfoxed is a game that is extraordinarily easy for adults (at least most adults, I hope), but will challenge small children in a fun, satisfying, and secretly educational way. Correctly guessing the thief makes them feel great. As such, this is not the greatest family game in the sense that both the young and old can participate with equal delight. More educational, the adult inevitably takes on the role of helping small children by asking them leading questions. “If we know that the thief is wearing a monocle, does that mean Anita is a suspect?” But as time goes on, the child starts to ask themselves these questions in deducing who is and isn’t a suspect, and make their own decisions. I’m not five years old any more, but if someone gave me the choice of dry logic or pie-stealing foxes, I would have gone with the foxes…