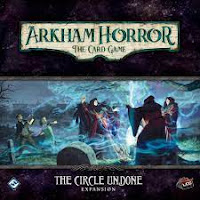 Note: This review covers the deluxe expansion The Circle Undone, as well as the six Mythos packs which complete the campaign. It will not contain any spoilers save the roots of story which introduce the campaign as a whole and the new investigator cards. All other card, scenario, and story details will be untouched.

The first three full campaigns of Arkham Horror: The Card Game have been rich, varied experiences. Each feature unique threads of game/story that take players in unexpected yet familiar, visceral yet fantastical, tactical yet strategic directions. I’ve come to believe this card game may be the only way to experience Lovecraft without laughing out loud. Thus, where The Dunwich Legacy is a classic Lovecraft story complemented wonderfully by gameplay mechanics, “The Path to Carcosa” is as much a psychological as physical journey, while “The Forgotten Age” pushes the difficulty to eleven through an Indiana-Jones, jungle exploring adventure. This the fourth campaign, “The Circle Undone”, looks to really focus on narrative, and expand and explore the ways witchery (a previously untouched theme) and many of its familiar elements, manifests itself in Arkham Horror. On the side, there is food to feed discussion on the personal and political if they want. This campaign is still Arkham Horror to the core, just with additional layers of story and some cerebral substance extending beyond the game for those who desire.

In as few words as possible, “The Circle Undone” is Salem Witchery4. Events begin in the dark, windy woods of Arkham, but steadily spin into a void of horrors more haunted than the night. Players begin the campaign, not with an investigator as has been the case with every scenario thus far, but with a temporary character who they must keep alive as long as possible with only a tiny handful of cards and resources. The campaign proper kicking off afterwards, players use their investigators to get to the bottom of the mystery revealed in the mini-scenario, and why ancient, spectral beings are appearing and re-appearing at a local millionaire’s mansion. It seems a war has been going on behind the scenes with only few people’s knowledge…

Arkham Horror has always been a story-based, semi-rpg experience. “The Circle Undone” keeps playing the rpg song, but turns the volume up on story. The campaign accomplishes this by filling interstices of gameplay with bits of mini-gameplay, textual interludes, and overall a larger number of story threads that weave and interweave as the scenarios unfold. Every Arkham Horror campaign is designed to be replayable from multiple angles, but “The Circle Undone” feels even more so given this number of threads and braided options within. For those who replay campaigns multiple times, this feels like to have been designed for them.

If the difficulty of “The Forgotten Age” campaign is in its signature, then the difficulty of “The Circle Undone” is in the fine print. Where “The Forgotten Age” has sudden spikes of trauma that threaten to take out an investigator (and do), “The Circle Undone” slowly but consistently lays down the hurt. Subtly a difficult campaign, the agenda window for doom is most often tight, and horror is handed out like candy via the Haunted mechanic. Action compression is key as players must find ways to maximize their turns, and having horror soaks is almost a must. Failing skill tests doesn’t mean game over, but the tolerance for lost actions feels tighter than ever.

Unlike the previous campaigns, “The Circle Undone” does not introduce several new game mechanisms at the outset. Sticking with the base game’s mechanisms, it add only two aspects: a new card type called Tarot, and a new keyword, Haunted. Tarot cards are straightforward additions to players’ options for building their decks, and are played like hand, body, etc. Some possess positive effects (player cards), and others, negative (basic weaknesses). Haunted is a location attribute. Many of the locations investigators visit are docile, that is, until said attribute is triggered by encounter cards, the agenda, or acts. As the reader can imagine, little good comes of being Haunted, but it does add the desired layer of fear. The remainder of “The Circle Undone’s” new mechanisms, and there are several, are revealed in the mythos packs (some of which are very interesting), and are thus best left to the player to discover as they play. (One of the final mythos pack contains a new card mechanism that has a huge amount of potential for future campaigns.)

In terms of investigators, “The Circle Undone” offers the standard crop for each faction, plus one. Interesting, however, is that all investigators are flipped on their heads in terms of class expectation. Carolyn Fern has a base combat value of 1, making her the weakest Guardian to date. Her strengths, however, lie in healing and support. Joe Diamond has the highest combat value of any seeker in the game yet, and tests the idea of what the class does through an interesting mechanic called Joe’s Hunch Deck. Preston Fairchild, a millionaire, is the new rogue investigator. With 1s across the board in terms of stats, he defies the idea of a ‘rich rogue’—at least initially. With an evade value of 5, Rita Young is the fastest investigator released to date, let alone survivor. But while she can run circles around monsters, she struggles in other areas. Undercutting the image of a mystic, Diana Stanley has fair stats across the board except the mystic’s mainstay, willpower, which is value 1. The mystic card pool not dead to Diana, instead players must find other means of boosting her willpower in combination with her special skill, and when they do, that old, familiar purple power is unleashed. Like Lola Hayes in “Path to Carcosa”, “The Circle Undone” includes a bonus investigator. Marie Lambeau is another mystic (previously only available in supplementary Arkham Horror material). While wielding one of the most powerful unique abilities in the game, she is likewise burdened by what is likely the worst weakness of any investigator yet (hint: it involves doom tokens).

In the end, “The Circle Undone” campaign is yet another tasty slice of Arkham Horror pie (with a side of bat ears and fried snail antennae). It contains all the elements that make the base game so much fun and adds new ideas and mechanisms that evolve it in unique ways compared to all the other content released to date. Where “The Circle Undone” really makes its mark is in the depth of narrative, and the substance to it. With several threads constantly in play, backstory (including characters) is deeper, and the options for moving through the campaign are more diverse—not overwhelmingly so, but at least a degree greater than previous campaigns. If players want, there are side elements, existentialism and gender, that can be discussed. Difficulty is likewise ramped up a degree from the early campaigns, but is more consistently difficult (and therefore semi-predictable); “The Circle Undone” has foreshadowing… (Sorry for the bad pun.)

The following is a list of the products in “The Circle Undone” campaign.

The Wages of Sin (Mythos pack)

For the Greater Good (Mythos pack)

In the Clutches of Chaos (Mythos pack)

Before the Black Throne (Mythos pack)