IEM Katowice has finished, which means another look back at Starcraft II in the prior 12 months. How was the competition? How has the game evolved? What changes have happened on the player scene? Which players shone the brightest? Which matches rocked our world? Let's take a look.

Despite the overall lack of offline tournaments in 2021, the scene remained relatively healthy, and viewers were treated, like every year it seems, to tip-top quality matches. Looking at SCII's business macro, things looked normal, which can generally be seen as good. It's still the most sophisticated, exciting 1v1 esport to watch.

What we didn't see in 2021 does not bode well for the Starcraft II scene. But it must be noted. First is something brewing before 2021: the lack of fresh blood. 2020 did not see an influx of young talent, and neither did 2021. And if anything, only more of the old guard retired or faded from the scene. Sure, a few familiar names returned from the military, and a couple of names which lingered in mediocrity in Europe poked their noses a little higher. But (and it's a big 'but') there are simply extremely few new names coming in and showing strong promise. Where the player scene was in constant evolution the first ten years, the past couple of years, and especially the past year saw evident stagnation.

Another thing we did not see, and something which bodes equally poorly for the scene, is diminished tournament sponsorship. GSL reduced its footprint. The number of premiere tournaments did not grow in prize money. And the biggie, IEM Katowice and Blizzcon were merged into one tournament. Some might say this is all inevitable—a predictable aspect of the video game environment, not to mention modern culture in general. And they may be right, unfortunately. Starcraft III anyone?

And yet another lingering issue is the lack of “new” strategies. I'm aware that SCII has an evolving meta, but in terms of truly fresh approaches, there is little. Since Blizzard stopped supporting SCII, there haven't been any balance patches, nor have their been any expansions/new content to diversify content. The game has gone unchanged for two years, and strategies are starting to show their age. This does something to the excitement and entertainment value. Do we still watch? Yes. Do we still enjoy it? Yes. But is it the same as watching a game morph and evolve based on quarterly bug fixes and yearly balance patches? No.

2021 was a good year— better than 2019. But my gut feel is that 2022 will be the last truly quality year of SCII entertainment. The game is inherently good enough to survive for another decade or so in local and small groups and tournaments. But if Blizzard stops pumping money into tournaments—and 2022 is the last year of their agreement with ESL (organizer of all the premiere tournaments), then the end is in sight. Thirteen years would be an excellent run. Extremely few other games have existed as Starcraft II. The longevity, the number of tournaments, the number of progaming stars. It is one of if not the most complex, and therefore most entertaining to watch, esports out there. Let's enjoy it it for what it is today.

Comeback Player Award – No player immediately came to mind, but after looking at the point rankings, and remembering the random threat that he sometimes fulfilled, I give this award to Dream. He is not the most successful player returning from military service, but in 2021 he was a factor.

Where Were You Player – As with every year, I ultimately hate putting a name to this category. But it's worth looking at. We focus on success so much that it's easy to overlook the players who we expected to be in the thick of things but weren't. This year there was no obvious name for me. I thought about Elazer, but ultimately decided on Neeb. After shocking international success years ago, a one year's dominance of the non-Korea scene, dominance of the Americas, and always more than one upset on the international stage, this year he was a non-factor. While still doing well in the Americas, he nevertheless dropped out early in every global, international tournament. Which is sad. I like watching Neeb. He can be exciting, fresh. Just not in 2021.

Breakout Player – I thought long and hard about this. I will first give an honorable mention, then go to the winner. Maxpax, please attend a LAN. Your absence in Katowice I believe prevented you from winning this award. While never winning a big tourney, you were in the top 4 a lot, and always causing problems for the top dogs. After consideration, this is Zoun. Reaching the finals of two premiere tournaments, upsetting big names in several other tournaments, showing true grit in making comebacks, and overall being an exciting new player to watch with potential (one of an extremely few), he makes the strongest case. Good luck in 2022.

Best Tournament of the Year – For once I'm going to go with the obvious. I loved-loved TSL Shopify 7, but IEM Katowice takes the cake. With the exception of perhaps two matches, everything in the quarterfinals and after sizzled, capped off by a final that, while not the greatest ever, still had huge amounts of tension and fast-paced, fierce competition going down to an exciting seventh game. 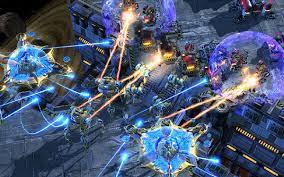 Best Foreign Terran – For the first time in several years, Special is not the best foreign Terran. Winning Dreamhack Winter Europe, placing high in a number of other premiere tournaments, top Terran points getter in Europe, and occasionally taking down tier S players like Serral and Reynor, it's Clem. No question. In one year, Clem achieved heights Special, unfortunately, still dreams of. (Still rooting for you,Special.) Honorable mention here goes to HeroMarine, especially his IEM Katowice semifinal run. Perhaps he can build on that success?

Best Foreign Protoss – Another year to put a fork in the success of foreign protoss, unfortunately. If it weren't for Neeb and Astrea in the Americas, there wouldn't really be anything to talk about—especially since Showtime continues to be unable to repeat as premiere champion for several years now. So, this year we have a new winner: Maxpax. Lucky for him, most of 2021 was online, which lead to some high-level top 4s, but not much more. Protoss outside of Korea is not a promising place. If 2022 moves offline, we may be left with even more mediocre foreign protoss...

Best Foreign Zerg – This is clearly Serral. Reynor poked his head out of the water a few times and took home big trophies, but Serral was back. I assume Serral would say he never left, but there was certainly a renewed hunger, a revitalized passion in his play. He took things to another level competitively, resulting in the most hardware out of any foreign zerg. His consistency was just amazing.

Best Korean Terran – Bunny showed huge improvement—or at least was able to step into the empty space left by TY and Innovation's retirements. But he didn't take any hardware to show for it. Top 8s and 4s, yes, but no final or trophy. A shout out to Cure. He won a GSL, and was highly competitive at times. But Maru is the clear winner here. Taking home two premieres and placing second in three more, not to mention success in big name major tournaments, it's now the lone horseman. Nothing can match his 4 GSLs in a row a couple years ago, but 2021 at least saw in return to top form for extended periods.

Best Korean Protoss – Looking to get the most out of his last year of competition, Zest seemed to be in every single tournament, premiere to weekly. But his end results are not strong. Always a threat, but zero premiere wins in 2021. Trap, on the other hand, cemented his place as best Korean Protoss by tying himself with Rogue for winning the most premiere tournaments in 2021 (three), and placing second in two more. With Stats gone, Parting going to the military, and Zest being on-again and off-again, there really is no competition at the moment. I would say, however Zoun is deserving of mention as a potential taker of this prize in 2022.

Best Korean Zerg – While Dark was a strong contender in nearly every tournament he played, once again the award has to go to Rogue. Winning three premiere tournaments (including another GSL) and coming in second in an ESL Season Finals, the quiet-faced Korean once again holds the banner as best Korean zerg at the end of the year.

Player of the Year – This award, like last year's, came down to IEM Katowice. Which of the players contending for the prize would show up to prove they were the best this year? Rogue? Maru? Or Serral? All three players, along with a surprise visit from Heromarine, made the top 4, in some ways confirming their status as the best in 2021. But only one could walk away. And it was Serral. Making up for his defeat in the King of Battles, the Finnish phenom got a clean victory over Maru, and while certainly getting more than a handful in Reynor in the final, was able to get several monkeys of his back and beat the Italian. Top point getter in any region, as well as overall leader in most premier tournament finals, as well as premiere tournament wins, it's gotta be the Finn. Great job, Joona. Way to prove you're a real gamer by climbing the hard road back to the top.

Matches of the Year

As usual, I kept a running list of great matches throughout the year. While there was no question what the best match of the year was, there were still a number of matches worth watching again:

This is not only the best series of the year, this is my personal greatest series of all time. Let's look at the list. 1) Two of the players who will go down in Starcraft II history as among the absolute, tip-top best of all time. 2) Both playing in prime condition. 3) Playing a Bo7 grand final of a tournament. What more could you ask for? I guess th eonly thing missing was offline. Otherwise, this match is Starcraft II stretched to the absolute max, showing why it is the most complex, most entertaining esport out there.

While 2021 was likely SCII's swansong, I think we can at least look forward to one more great year of the world's best esport.