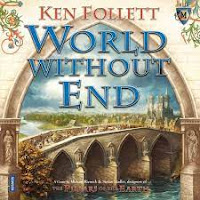 It’s interesting how habits in life ebb, flow, and evolve. I played board games as a child, not heavily, but we had a small collection. The hobby abandoned throughout my teens and twenties, it wasn’t until my thirties that (apparently) life slowed down enough to put me back at the table looking for social, fun tactile, and tactical experiences. A local music and book shop had a small collection of board games for sale, and one day we bought Worlds Without End (2009). Entirely the opposite of my current, research-based purchases, it was a lark, a whim. My brain seemingly starved of such experiences, we enjoyed the game for just being a game—no context, no media influence, no hype, just a game on the table. What do I think today?

World Without End is based on the (brick of a) novel by Ken Follet of the same name. A 2-4 player competitive game, it focuses on the years of Europe’s black plague. Heavy on resource and hand management with some worker placement, players try to build the city, but still able to do the following: pay taxes, eat, be filial to the church, and heal illness. Like the stereotype of Medieval existence, it’s a tight, starved experience (that is decided by victory points, natch).

In World Without End, players take actions available on the board by placing meeples and play cards from their hand to trigger various actions or bonuses. As time goes on, those actions or bonuses can snowball to positive effect, the players’ supplies growing. Having stone and wood to build the city is key. Needing to collect a certain amount of money, food, and piety in the course of a round, however, the majority if not all the players’ hard work will go toward the church, city, and family before the next round begins. Lacking the necessary amounts of these resources results in penalties. The player who is most able to stay ahead of this curve while deriving bonuses from their investments will be the best Medieval citizen, and win.

World Without End will not be a game for everyone. For people who enjoy Medieval-themed Euro games with extremely tight resource and hand management—games where players constantly feel like they are playing from behind, it's certainly worth a look. The designers have created a taut, well designed experience. Gameplay is very balanced, and the way seasons and buildings are handled makes for a variable, non-repetitive experience. The art and components are nothing special, but are solidly functional, nothing to be critical of. The game will not make the BGG top 100 of all time, but given the fact the fundamentals are waterproof and the mechanisms tight, it will be a hit for the right Euro crowd.