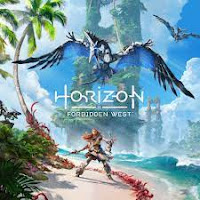 Five years ago I did something I never do: I walked into a game shop and bought a AAA video game on its premiere day. In today’s world, this is a huge risk. Most big, AAA titles are not released in polished form. It’s much better for the player to wait six months for the bugs to be worked out and a smooth experience (as intended) to be had. And yet to my surprise, when I got home and popped the game in the console, everything worked. Like Nintendo games of old, I had purchased a fully-fledged, ready-to-go product. And what a product it was.

Of the hundreds if not thousands of games published, Horizon: Zero Dawn is one of the top 10 of the PS4 generation, and one of the greatest action rpgs of all time. Guerrilla Games looked at the field, borrowed the best bits and pieces here and there, then mixed it all into a story and world of its own. Horizon: Zero Dawn was influenced by some of the best games of the time (The Last of Us, The Witcher III: Wild Hunt, Uncharted 4, and others), and by creating its own characters and purpose, produced a game that is still talked about today—to the point a sequel, Horizon: Forbidden West was made in 2022. I also bought it on opening day.

Like Naughty Dog’s approach to its major sequel The Last of Us Part II, Guerrilla games does not reinvent the wheel with Horizon: Forbidden West. They chose to tighten gameplay in an extended story while adding new options. Even after a few minutes of Forbidden West gameplay, the player will immediately feel at home—as though they’ve returned to the pleasing comfort of Zero Dawn. There are numerous additions, which I will get into in a moment, but the soul of the game is wholly familiar. If the core works, why change it?

The story of Forbidden West picks up a short time after Zero Dawn. A strange, red blight is spreading across the land, killing living creatures on its way. Knowing that a terraforming AI exists that will eliminate the blight, Aloy has been searching the land ceaselessly for it. But she has found no success. At the outset of Forbidden West, she returns to Carja lands to follow up on one last location where the AI may exist. Her search of the location not going as intended, Aloy finds herself in the position of needing to go to dangerous lands where the brutal Senakth tribe exists, but where she may find what she is looking for. Enter the forbidden west.

As stated, Forbidden West is a game firmly in the mold of Zero Dawn. The player roams an open world of forests, mountains, deserts, etc, satisfying quest lines, upgrading Aloy, and fighting a fascinating array of machines along the way. But Guerrilla Games have strengthened all of these areas by making them slightly slimmer or slightly more robust, all in a way that makes gameplay a degree more enjoyable than Zero Dawn. The overall quality of life is improved all around. Players can still use Aloy’s Focus on machines, for example, to learn about their weaknesses, strengths, pathing, etc. But now, there are additional options which allow the player to focus on, and even highlight, specific parts—for target practice, naturally. This small but simple change makes hunting and harvesting from the machines a more interactive and enjoyable experience.

And there are still further small but good improvements. Forbidden West remains an open world game with main and side quests, but it’s fair to say these are more streamlined. Players still have freedom to explore the map as they please, but the sections which advance the main and side quests are more concentrated chunks of story that have more meat on them than the average open world game. Resources, upgrades, coils, weaves, weapons—all have been revamped. They remain wholly within the Horizon world, but function slightly differently, typically more specialized than Zero Dawn, and are most often the result of resolving different types of quest lines.

On top of all of this, Guerrilla Games have added new functionality and gameplay that round out the package. For starters, Aloy can now swim underwater. Opening up a new 3D game space, there are naturally enemies, locations, upgrades, and secrets which are encountered while diving. Secondly, like Gwent in The Witcher, there is a game within the game. Called Machine Strike, developers took inspiration from chess and created a board game which uses Horizon machines, but which has their own twist on the rules. Machine Strike will be spurious for those interested only in running the main quest, it remains a spot of fun, however, for players who enjoy atypical yet appropriate side material. And like Gwent, I also imagine Guerrilla Games are testing the waters for individual release of Machine Strike.

And still there is more. Adding to the list of new functionality and gameplay, there are now ruins that act as 3D puzzle platformers. On top of Tallnecks and mountain ascents, there are now a couple new types of vertical climbing challenges, including capturing flying drones. There are fighting pits where the player can test their melee skills at increasing levels. There are new hunting grounds which test specific skills to achieve certain goals. The metal flowers return, but have a new twist. And lastly, at least here in this review, the value of Override is expanded in wonderful ways. Where players had limited options for joyriding on machines in Zero Dawn, in Forbidden West the horizon (no pun intended) is the limit. If anything, Forbidden West unpacks the pleasure of being a machine riding beast master.

In terms of gameplay itself, Aloy still wields her bow, sling, tripcaster, spear, and other weapons players remember from Zero Dawn. And all still have the possibility of effects like shock, freeze, acid, fire, etc. But there are new toys and effects—just what the player wanted. I will not spoil the toys and effects here as they are best discovered in game. But I will say they are wholly in the spirit and style of the game and are just as much fun.

There are several other ways that designers have made alterations to Forbidden West. The menus have been overhauled but remain recognizable. Melee combat has added layers of complexity and sophistication. Combos and stacked bonuses are possible. And so on. Where Zero Dawn was a full experience, Forbidden West is practically exploding with options.

For such a giant game (it comes on two discs), it’s not without its issues. One is traversal on foot and up vertical faces—that big chunk of Zero Dawn gameplay that borrowed from Uncharted. In Forbidden West it returns in more refined, as well as less refined, form. Horizontal traversal (aka walking) is typically normal, i.e. no obvious problems as Aloy encounters a very uneven landscape. But there are certainly moments that the allowances developers made for Aloy’s movement are in fact too loose. The result is that she can easily run up or over objects, causing unintended consequences like falling to death or popping into view of an enemy machine. Delicate control of Aloy is not always easy. Vertical traversal (aka climbing) is significantly expanded in its options, but often frustrating for the lack of response or unintended movements Aloy makes. Vertical surfaces are now riddles with grab points (compared to the limited number in Zero Dawn), but that doesn’t mean Aloy climbs any more easily—air humping a thing as players try to get Aloy to move higher.

As stated, Forbidden West is a game built on top of its predecessor. This means that developers did not need to spend their time building the engine, and could instead focus on filling out a vision—expanding types of gameplay and functionality. After having played Forbidden West, the question arises: did they in fact expand too much? In some ways, Forbidden West finds itself in the same situation as Ubisoft games, particularly their problems with bloat, meaningless content, and pointless collecting. Forbidden West rides on the edge of this bloat. There is a HUGE amount of content. Guerilla Games have offered players a buffet, saying: take what you want and leave the rest. I personally believe that less is typically more, but I can at least say that Guerilla Games tried to make the majority of side content salient to the core experience. They may not always succeed, but there is an awareness of the fact a game needs a soul, an awareness that Ubisoft lacks.

In the end, Horizon: Forbidden West is a wonderful game and a worthy sequel. Rather than entirely changing things up, designers tightened the areas that worked well in Zero Dawn and added new parts and pieces that fit style and flow to make a rounded whole. Added too much? That will be up to the player. Most importantly, the game is just as fun, if not a little more than Zero Dawn. All of the quality of life improvements allow the player to focus more on the game rather than managing the controller. Hunting machines feel even more like hunting, for example, all the while the open world is just as big but a touch more complex in the ways players can interact with it. And story—the bane of many open world games—remains a bit hand-wavy but manageable, and I would argue a degree more tenable for the average person. The PS5 era of games is beginning on strong footing. I wouldn’t mind a third game in the series…