Review of "The Yiddish Policemen's Union" by Michael Chabon 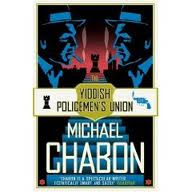 Like contenders looking for a shot at the champ, or lesser men seeking to find fault in a wise master, so too is the reading of books that have won multiple awards.  Senses are heightened, the eyes are more attentive, and the brain analyzes every word, every phrase, looking for the reasons it is revered amongst the greatest, and perhaps more so, reasons it shouldn’t.  Michael Chabon’s 2008 The Yiddish Policemen’s Union, having collected some impressive SF hardware (Hugo, Nebula, Locus, and Sidewise), is one such zenith.  In this case, however, it’s tough to find fault in the logic.

While references to Chandler and the book’s noir overtones hog cover copy, there is far more to the novel than just a world weary cop, damsels in distress, and back alley shoot-outs.  Alternate history in full effect, Chabon uses the motif to dig deeper than plot into the ideas of cultural enmity and the sociology of group identity.  The snub-nose revolvers, black felt fedoras, and gangsters are all there, they just happen to be at play in a world of Jews, Tlingits, and all manner of cultural hangers-on in an alternate history version of coastal Alaska.  Yes, the Alaska you know, cold, choppy seas, pine trees, and lots of ice and snow…

Choosing the Slattery Report of 1948 as his departure point from actual history, Chabon brings his artistic license to bear upon an imaginary situation wherein refugee Jews from Europe after WWII are relocated to Sitka, Alaska instead of Israel.  Alaska and the Yiddish at first seeming odd bedfellows, the dark humor and dark skies hanging over each soon develop a healthy relationship.  Part of the “frozen chosen”, Meyer Landsmann perfectly suits the lonely, snow-covered sidewalks and meals at greasy diners, the smell of fried moose burger fogging the windows.  A detective, Landsmann’s troubles begin when a neighbor is found shot in the back of the head.  Israel occupied by the Palestinians, the trouble thickens when Landmann’s investigations take him deeper into the underworld of the Jewish mafia and their plans for the holy land - the neighbor’s murder only the tip of the iceberg.

Another cloud hanging over the characters wandering Sitka’s bleak, winter streets is their land’s  upcoming reversion to American soil.  Like the ambiguity residents of Hong Kong had trading one authority (Britain) for another (China) in 1999, so too do the Jews inhabiting Sitka face the uncertainty of not knowing what will happen to the identity they’ve built in the northwest state in the coming months.  What rights will the people have?  What new laws will come into play? And most important to the story, what crimes can people get away with now without fear of retribution from the incoming administration?

Characterization in The Yiddish Policemen’s Union is as good as literature gets.  Everyone has a story, from the Filipino doughnut man (living in a Jewish Alaskan state!!) to the mute chess activist, the Tlingit police chief in the bush to Landsmann’s tell-it-like-it-is police chief.  Barbie dolls and GI Joe nowhere to be found, all Chabon’s characters are real, breathing humans that we meet everyday.  Like John Goodman, Gilbert Gotfried, and Dame Edna, none of the characters are painted in flattering colors.  Bina, Landsmann’s ex-wife, is an overweight, cocksure, and lonely woman.  Landsmann’s partner, Berko, is a half-Jew, half-Tlingit whose massive build, Tartar eyes, and native warhammer do nothing to stop him from wearing a yarmulke.  Likewise, it does not stop him from having trouble knowing which side of his cultural coin he falls on.

For those who do not appreciate rich, simile laden prose, do not pick up The Yiddish Policemen’s Union – or any book by Chabon, for that matter.  Were he an opera singer, he’d have “pipes”.  The language imaginative but always spot on, it’s possible one’s appreciation of literature can acquire new heights reading his novels.  The opposite of Hemingway, Chabon revels in colorful, obtuse descriptions that defy logic on the surface yet touch something sentimental and precise in afterthought.  At one point Landsmann is “flying solo, as sober as a carp in a bathtub”, while at another he observes a man with a “halo of dandruff, a bony bridge of nose, and grooves on his brow like a grid left in raw pie crust by the tines of a fork.”   The reader grinning one moment, the next shaking their head at the style’s bravado, the novel is truly a treat for those who love the dance of language.  (As Chabon employs roughly 30-40 Yiddish words throughout the text, most of which can easily be understood based on context, readers should be ready for an educational and thoughtful encounter with the language.)

In the end, fans of Coen brothers’ films, particularly Fargo and A Serious Man, will find The Yiddish Policemen’s Union simply top-of-the-heap.  The same dark humor, realistically unique personalities, and simple but evocative scene setting can be found in The Yiddish Policemen’s Union.  Far more than a murder mystery, readers should also expect poignant commentary on the current state of affairs in the middle east and the violence which seems permanently in cycle there - all in tones far from discriminatory.  The personal struggles of Landsmann, his ex-wife Bina, his partner Berko, and a handful of other people whose lives are caught in the socio-political milieu of reversion will also strike home to readers looking for stories more personal.  With gorgeous style, sublime humor, social and cultural commentary, solid plotting, and brilliant characterization, it’s easy to agree with the awards the novel has won.  Highly recommended.
Posted by Jesse at 1:36 PM