Review of "Flatland: A Romance of Many Dimensions" by Edwin Abbott 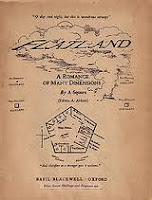 The first time a person sees a sample of pond water through a microscope is an eye-opening experience.  The life teeming there is mind-boggling—literally a whole new world suddenly making itself available to the mind’s eye.  Edwin Abbot’s 1884 Flatland: A Romance of Many Dimensions intends the same revelatory experience for readers.  An open mind the only tool needed to understand his import, no microscope or scientific knowledge is necessary.  Fantasy in the most abstract sense, Flatland put satirical geometric fantasy on the map.  The only entry thus far, its uniqueness is indeed special.

Through the eyes of Square and his native Flatland, Abbot depicts life in a two-dimensional world.  Existence reduced to geometric shape, the more symmetrical angles a person has, the more intelligent they are considered, and as a result, treated.  The educated of Flatland are squares, pentagons, octagons or such, while soldiers are isosceles triangles who use their acute angle for attack.  Leaders possess enough sides to be considered circles, while women are only a line and have to shout everywhere they go so people can avoid being punctured by one of their two ends.  His job good and children’s futures bright (they are pentagons), everything is going smoothly in Square’s life.  But things suddenly take a turn when a presence appears that announces itself as coming from another dimension—a third dimension.  Square’s adventures begin.

Though the tone may seem laughable, Abbot strikes a number of serious social chords in Flatland.  All is satirical allegory.  As can be seen in his literal shaping of women, their position in society is wholly different than the men’s.  Freedoms greatly limited, they must announce their presence everywhere and are instructed to spend as much time in the home as possible due to the danger they are thought to represent. While feminism is soup du jour in today’s university journals and print media, the inclusion of such a theme was still radical in 1884.  That persons are discriminated against based on appearance was also a relatively minor discussion point amongst the intelligentsia of Abbot’s day. However, a sub-story of Flatland tells of the leadership’s quelling of a color movement because the result would have meant that no one could tell how many angles a person had, and subsequently which level of society and etiquette would be needed.  This situation remaining analogous to society today to a degree, Abbot’s novel, while seeming absurd on the surface, reveals itself as serious commentary despite the fun of the premise.

As would be natural to a story featuring visitors from other dimensions, there is also a strong religious message in Flatland.  Like Paul’s miraculous experience on the road to Damascus, another of Abbot’s aims—perhaps his greatest—was to remind, or make readers aware of, the eternal possibility of realities beyond that perceivable to mankind.  By using the scientific language of the day being used to speak against the existence of the Christian god, he hoped to prove that the door was still open: science, particularly math and physics, could be wonderful tools to present the supernatural, as well.

In the end, Flatland: A Romance of Many Dimensions is a highly enjoyable read that forces the reader to alter their perspective on reality in a fun, interesting, and possibly even life changing fashion.  Flatland is truly a world enjoyable to envision.  Coming from a 2D land, Square’s adventures in 1D and 3D take on levels of poignancy surprising for a premise so simple.  Ignoring the commentary on feminism, religion, and civil rights and Flatland is still readily lovable for its simple twist on reality and the curiosity of how a fantasy with geometric parameters might shape up (sorry, couldn’t resist).
Posted by Jesse at 6:28 PM