Review of "The Gay Genius: The Life and Times of Su Tungpo" by Lin Yutang 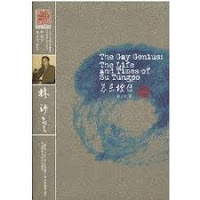 Lin Yutang was not to know the adjective he chose to describe the most brilliant Chinese poet of the Song Dynasty would evolve in the latter half of the 20th century to have a meaning he did not intend.  It detracts in no way from the biography, however, Lin combining beautifully the poetry and life of Su Tungpo, considered by most one of the greatest poets of not only Chinese, but world history.  The word chosen due to the hardships he endured with a smile throughout his life, Su proves that neither poetry or politics turn out as you’d like them when intelligence and integrity guide your actions.

Though born and raised in the rural west of China in 1037, Su Tungpo, or as he is more commonly referred to, Su Shi, would go on to live an extraordinary life in seemingly every province and major city in China.  Poet, counselor, governor, philosopher, outcast, even gardener and Daoist quester for immortality, his ideas may seem more scattered than they truly are.  Given the quality of his writing, the enduring strength of his wisdom, and his willingness to stand up for his beliefs, when one looks deeper they find the titles appropriately given, nothing trite about the poet’s life.  Substance to the form makes for an interesting life, and in the hands of Lin, interesting reading.

One of, if not the foremost, liaison between China and the West, Lin Yutang has a way with the English language 95% of native speakers do not.  The descriptions eloquent, Lin drifts easily along the events, major and minor, of Su Shi’s life, the political context in which he lived, and the prosaic output we still enjoy today.  Though perhaps more exemplary poetry could have been included, one cannot fault Lin as his work was intended to be a biography through and through, the poet’s words translated in innumerable texts elsewhere, including Lin’s own The Importance of Understanding.  An engaging and thorough survey, Lin never falters from the first to the last page, every deed of the major figure in Chinese history presented in appropriate measure.

In the end, The Gay Genius: The Life and Times of Su Tungpo is everything a person could want in a biography.  On top of being a complete account, Lin packs the text with cultural and historical facts to give the reader proper background on a time and country relatively unfamiliar to Western minds.  The only major complaint may be that Lin’s voice is redolent throughout, but given that he is able to express himself humbly and offer a great deal of wisdom and insight into the events of the poet’s life, he can be forgiven by less exacting readers.  Plain and simple, there is no better biography of Su Shi available in English.  If you’re interested in either Chinese poetry or Song Dynasty history, the book is well worth your while.
Posted by Jesse at 7:35 PM