Review of "Shah Jahan: The Rise and Fall of the Mughal Emperor" by Fergus Nicoll 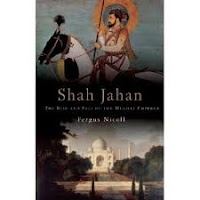 The vast majority of human history is a relatively monotonous affair and does not make for interesting reading for most people.  Hunting and gathering, living in smoky wooden huts, even going to work day-in and day-out at a company simply can’t get antennas buzzing.  There are brief flashes in history, however, which are quite the opposite.  Aflame with drama and social pyrotechnics to the point events seem surreal, the life of Shah Jahan is one such existence.  Fergus Nicoll captures all of its fleeting glory in his 2009 Shah Jahan: The Rise and Fall of the Mughal Emperor.

Existing at a time when bloodline was only the starting point for determining monarchial ascendance, Shah Jahan warred for the throne amongst his brothers like his, and his father’s fathers, before him.  Primogeniture acquired by force, the Mughal era was a constant bloody feud at the top.  It was also an era of unprecedented wealth in Indian history.  Europe’s kings and queens of the time living in poverty by comparison, the amounts of silks, women, jewels, gold, elephants, lands, etc. available to a Mughal lord was lavish to say the least, the limits of mortality seemingly the only thing separating them from gods.  Mix luxurious parades, palaces, and harems with assassination attempts, court intrigue, and a tumultuous political scene, and the flickering flame that was Shah Jahan’s life takes on a dramatic hue few men in history can boast of.

Riding the fence between the dry lands of formal report and the greener lands of infotainment, Fergus Nichol’s biography of the Mughal emperor is approachable by all.  Fully supported by facts and documentation (there is a 18 page ‘works cited’ section), the narrative is nevertheless structured to focus on the less docile aspects of Jahan’s life.   Using the larger social and political context of the time, all of the major events of the Shah’s life are foreshadowed in appropriate detail, followed by active description.  The book only 250 pages, Nichol does not describe the day to day life of the emperor, his family, or his kingdom except when necessary.  Events and story the focus, readers seeking a detailed account of the Mughals should look elsewhere.  With its beautiful packaging, including color imagery, family trees, and textual excerpts from historical documents, the book is intended to be perused for enjoyment, not studied.

Nichol first sets the scene with the history of Jahan’s forefathers and the bloodshed and vice that accompanied their rises to power up to the time of Jahan’s birth.  The young man’s life is then traced from being anointed next-in-line to patricidal outcast.  Eventually taking the throne, the amount of wealth at Jahan’s disposal not only shapes the Taj Mahal and Peacock Throne, but ultimately leads to his downfall, all facts related in appropriate stages by Nichol.  Gaps do exist, but again, the book is intended to be read for pleasure not as a complete survey.

Prince, general, chosen one, outcast, father, rebel, husband, emperor, and prisoner are only some of the titles Kharrum Shah Jahan held in his life.  Wholly human despite the extra-ordinary position he occupied, his virtues and vices are all relayed in an objective tone that leaves the reader with an appropriate measure of empathy reading his fate.  Jahan’s love for his second wife capable of being as warm as his blood was cold toward his brothers, Shah Jahan’s life is markedly human despite the supermarket tabloid surface.

In the end, Fergus Nichol’s Shah Jahan: The Rise and Fall of the Mughal Emperor is an epic-styled biography that covers the important landmarks of Shah Jahan’s life, rebel to the throne to prisoner of the throne.  Given the position Jahan occupied and the social mores of the era regarding royal ascendancy, his story is anything but boring.  The blood and betrayal, honor and love, all set against the backdrop of one of the most gaudy and extravagant dynasties to rule India, makes for imaginative reading not unlike a novel.  Knowing, however, that the story is taken from history and not daytime television only renders the tale all the more powerful; lessons remain to be learned.
Posted by Jesse at 7:34 PM