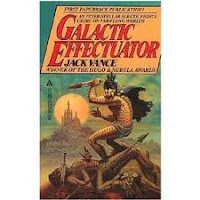 Though certainly more well-known for his science fiction and fantasy, Jack Vance was also an avid mystery writer.  The crime genre influencing much of his more famous works, all five of The Demon Princes books, Araminta Station, Son of the Tree, The Houses of Iszm, Maske: Thaery, the Magnus Ridolph stories, and several others feature men solving riddles in private eye fashion.  But, Galactic Effectuator is Vance’s most overt example of mixing space adventure and mystery.  Actually a compendium of two novellas: The Dogtown Tourist Agency and Frietzke’s Turn, the book features Miro Hetzel doing what he does best: effectuate investigations into the puzzling and mysterious.

The Dogtown Tourist Agency opens with Hetzel signing off on a contract for which he’d been employed tracking a playboy.  Moving quickly on to the next case, one Palladian Micronics which produces robots, Hetzel interviews the CEO who informs him a competitor is able to sell a similar product at a much, much lower price.  An obvious threat to the industry, the CEO wants to know why, and gives Hetzel a retainer.  He also provides some clues, all of which point to the backwater Maz.  Arriving on the strangely populated planet, what follows is an investigation that becomes only more mysterious by the day and requires all of Hetzel’s wits and bravery if he’s to get to the bottom of the case.


The Dogtown Tourist Agency feels like a lengthier revision of the Magnus Ridolph short “The Kokod Warriors”.  The aliens on Maz warring amongst one another in primitive and tourist-attraction fashion, their plight becomes interlinked with Hetzel’s as he tracks down the reason for the cheaper robots.  Though the story starts in generally realist fashion, in the latter half it evolves into the more exotic, particularly as Hetzel’s investigations take him further into the uncivilized areas of Maz.  The native Gomaz as Vance as can be, the climax of the story shows an imaginative twinkle lacking in much of the author’s earlier short fiction, but not quite up to par with his more polished efforts.

Freitzke’s Turn, the second novella, finds Hetzel on another case: Conwit Clent has been the victim of a bizarre (even for Vance) biological crime.  The resulting investigation returns Hertzel to the scene of his university days, in particular upon a clever rival named Faurence Dacre. Tracking the man down proves difficult, even knowing he’s right under his nose.

Not up to the same quality as The Dogtown Tourist Agency, it’s possible Frietzke’s Turn was a loose sketch of what would become The Book of Dreams seven years later.  Both stories feature a protagonist attempting to hunt down a cheating scoundrel in the haunts of their youth, every ounce of detective skill needed if they are to be apprehended.

In the end, Galactic Effectuator is just average Vance.  Generally comparable to the simplicity of his earlier short fiction, there nevertheless remains a touch of his more well-known novels, The Demon Princes most quickly springing to mind.  Lacking the sparkling dialogue of the Cugel works or Araminta Station, conversation and narration are more in the style of The Palace of Love or The Star King.  Private eye in space, that is Miro Hetzel, and he comes recommended for diehard Vance fans only.  Those new to the author have several better starting points.
Posted by Jesse at 7:51 PM