Review of "Ships from the West" by Paul Kearney 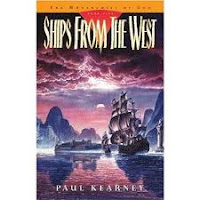 For readers perusing the volume titles of Paul Kearney’s Monarchies of God series pondering whether to slap down the cash, Ships from the West would seem a spoiler of a title for a finale.  It’s not, and the further those readers get into the series, the more they realize exactly how unpredictable the story is.  The pieces having long been introduced and the battles waged back and forth, Ships from the West is epic fantasy end-game near its best.

Regarding timeline, Ships from the West is the most unique of the series.  Picking up events sixteen years after the end of The Second Empire, it breaks the contiguity created by the first four volumes.  Almost all of the main characters still yet live, but each has matured.  Corfe has a daughter by Odelia named Mirren.  Jemilla’s controversial child, named Bleyn, has grown up and seeks the throne.  And the Sultan and Heria have likewise produced a child, a boy named Nasir.  The time has also been used by Aruan and his followers, among them Himerius and Bardolin, to build a mighty army at Charibon, their blades pointed directly at Torrunn.  King Abeyleyn has also been busy.  With the help of Hawkwood, he has constructed the mightiest fleet the world has ever seen, and at the opening of the book, the flotilla aims its prows toward the Western continent in an effort to wipe out the evils discovered there.  From the mighty battle killing numerous important characters in the first one hundred pages to the conflicts that follow, Ships from the West is virtually non-stop action.
Though the final fifty pages feel just slightly rushed, Kearney closes out the story of the kingdom in fine style.  No character’s fate is certain, neither is the state of the continent at the conclusion.  Using some typical fantasy tropes, Kearney also mixes in a lot of realistic outcomes that do the story a world of good, in turn preventing it from descending into fairy tale land.  By in large a tragedy, readers will read with trepidation as the characters in the story, characters that have been there since the first pages of the series, set themselves against odds that make The Iron Wars and The Second Empire look like child’s play.  So while Kearney continues to deal with plot at the expense of characterization, the master story he outlined at the beginning comes to an epic conclusion worthy of the sub-genre.

As problems in Ships from the West are identical to those of the previous volumes, I will not describe them further, except to note that Kearney is at least consistent in his faults.  If you’ve had no problems or forgiven the plot holes and inconsistent characterization in the first four books, the final book will be no obstacle.

In the end, Ships from the West proves the series worthwhile.  To this point, Kearney has shown a generally steady hand on the tiller of the story, and continues using this grip to guide the series to a grand conclusion that answers all of the questions and concludes all of the character conflicts raised.  Why Monarchies of God does not have a larger audience amongst readers of epic fantasy is beyond me.  Fully in line with the likes of Martin’s A Song of Ice and Fire, Bakker’s The Prince of Nothing, Gemmell’s Legend, Ruckley’s The Godless World, and Sanderson’s Mistborn, more focused than Abercrombie The First Law, and less purple than Rothfuss’s Kingkiller, it’s a series that deserves more attention.  If you call yourself a fan of epic fantasy, go buy it, starting with Hawkwood’s Voyage.
Posted by Jesse at 6:53 PM