Review of The Executioner's Guild by Andy Duncan 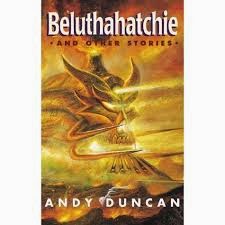 Dripping with the flavor of Howard Waldrop’s character driven tales set in the American south, Andy Duncan’s 1999 The Executioner’s Guild is also high quality storytelling.  Effusive rather than pointed, Duncan’s talents draw empathy for not only for the characters involved, but the situation they are in, striking at something deeper in humanity in the process.

The Executioner’s Guild is the story of an execution in Andalusia, Mississippi circa 1941.  Arriving one hot summer day, the executioner, one Jeffrey Simpson, trundles into the town in a rickety truck bearing the instrument of death, an electric chair.  The townsfolk in awe of Simpson and his lawful duty, he meets with Sheriff Davis over iced tea and pie, and the two discuss the condemned.  Offensive but compliant, Childress was found sitting quietly beside the man he murdered, and now waits his hour of death—bile on his tongue but acceptance in his heart.  The Sheriff, and in particular his deputies, are eager to see the sentence carried out and the weight of the imminent death, relieved.  But whether or not Simpson can perform his job becomes complicated when Childress requests to see the man who will pull the switch on his life.  Not for reasons the reader might expect, what happens as a result of their meeting in the small town overflows with tension.


Where Duncan earns his pay in The Executioner’s Guild is character—vivid, colorful character.  An immaculate stylist, he employs words with precision, defining people the reader can envision clearly before their eyes.  Emotion and understanding in tow, its near impossible not to engage with the townsfolk as they await the execution, particularly the feelings and thoughts running through the hearts and minds of those most intimately involved.

Where Duncan also earns significant points is in the manner in which he lets the story play itself out.  Capitol punishment, crime, and ethics in general are all polarizing topics, but Duncan refrains from preaching.  The characters telling the story not the author, the reader is allowed a view into the attitudes and reactions, hopes and fears of all involved.  The success of the novella largely hinging on this point, the story is thus an intelligent read that presents readers with reality and allows them to walk away with their own thoughts to mull.

In the end, The Executioner’s Guild is an intense, emotionally charged story that could have been several things—an overt commentary on capitol punishment or discussion of racism in the South, among others—but aims higher.  Duncan a born storyteller, he instead lets the lives of his characters—as colorful and unique as they are—present the personal and social realities of killing a man in the name of the law.  The novella bears several elements in common with Stephen King’s The Green Mile, but contains significantly less presence of the fantastic and looks more to the human rather than storytelling side of things. A memorable story.
Posted by Jesse at 8:33 AM