Review of The Life of Mahatma Gandhi by Louis Fischer 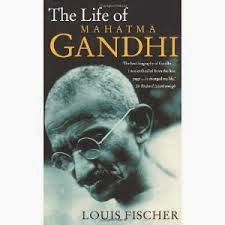 “Gandhi lived in forty-nine villages during his Noakhali pilgrimage.  He would rise at four in the morning, walk three or four miles on bare feet to a village, stay there one or two days talking and praying incessantly with the inhabitants and then trek to the next village.  Arrived in a place, he would go to a peasant’s hut, preferably a Moslem’s hut, and ask to be taken in with his companions.  If rebuffed he would try the next hut. He subsided on local fruits and vegetables and goat’s milk if he could get it.  This was his life from 7 November 1946, to 2 March 1947.  He had just passed his seventy-seventh birthday.” (557-558)

His name practically defining the word ‘altruism,' Gandhi’s attempts, in the days leading up to India’s independence, to keep Muslims and Hindus an Indian whole exemplify his dedication to equality and peace, and why the man is such an inspiration.  Though others have since been written, Louis Fischer’s 1950 The Life of Mahatma Gandhi was the first biography to appear after the man’s untimely death, and though possessing a large quantity of well-intended hyperbole, remains adherent to the facts in proper biographical fashion.


From social advocate to dietary eccentric, demanding father to freedom fighter, grassroots lawyer to political essayist, passive resistor to clothes weaver, Gandhi lived a life singular in the annals of history.  He fathered several children before the age of twenty, fought and won several important political battles over apartheid and oppression in South Africa, advocated non-violence and understanding throughout the Muslim-Hindu upheaval in the 40s, spent years in prison as part of non-cooperative rebellion, and was ultimately the turning point upon which India’s independence from British rule was granted, as bittersweet as it turned out.  Larger than life, history has seen few heroes like him, but could do with one thousand more, and Fischer’s biography covers the major events that make this true.

The man they called Bapu undoubtedly making for interesting reading material no matter which way you spin it, it therefore rests in the hands of the biographer to articulate that life in informative and objective fashion.  Having done his homework, the final forty pages of chapter notes, bibliography, and index cover this: The Life of Mahatma Gandhi is truly informative.  Drawing from Gandhi’s own autobiography, newspapers annals, history books, memoirs of others involved, letters to and from colleagues, acquaintances, and friends, as well as personal experiences and meetings Fischer himself had with the man, the biography is professionally done from a research point of view.  Included in this package is the contextualization of the major events in Gandhi’s life through the presentation of historical facts.  Fischer, for example, takes a chapter to look at the history of British rule in India, and the manner in which the Empire held authority throughout the Gandhiąs life.  Not overdone, Fischer’s career as a journalist has him providing just the right touch of background info for the reader’s benefit, Gandhi remaining center stage.

Some problems arise in the biography, however; commentary is pushed toward hero worship more often than respectable.  A few pages after banishing his own son from the house on moral grounds, Fischer writes: “Ghandi accepted everyone as they were.  Aware of his own defects, how could he expect perfection in others?" (271).   Having ignored the facts of Gandhi’s life, this unabashed glorification falls flat.  But it continues.  After describing how much Gandhi’s wife Kasturbai disliked the idea of doing the work of India’s lowest caste, the untouchables, the reader finds “[Kasturbai] never shirked the hardest work.” (262).  And there’s more.  Leading up to a discussion on religion in India, the reader encounters: “In the seven hundred thousand villages of India, Hindus and Moslems had always lived together in peace.” (279)  I think the people living at the time of Shah Jahan would have had something different to say.  And on and on the examples roll.  Suffice to say this type of exaggeration exists throughout the account, and is not a point of recommendation.

But beyond circumstances, Fischer likewise cannot resist tossing in personal opinion on politics at large.  “The British beat the Indians with batons and rifle butts.  The Indians neither cringed nor complained nor retreated.  That made England powerless and India invincible.” (345).  “Reading was obviously relieved that Gandhi’s arrest had caused no public commotion.  The provincial governors could have predicted this.” (255).  “Gandhi’s religion cannot be divorced from his politics. His religion made him political.  His politics were religious.” (134).  These are the words of a kneeling disciple, not a biographer.  It forces readers to strain to read between the lines, rather than absorb them at face value.  Readers who agree with the statements may not mind, but those looking for objectivity will cringe.

But perhaps the worst sin Fischer commits is the manner I which the biography is opened.  Rather than focusing on all of the positives Gandhi accomplished, or simply with his birth, Fischer tries to cash in on the drama by rehashing Gandhi’s assassination—a low move, indeed.  Moreover, had he left the event as it happened in the natural chronology, I can’t help but feel the impact would have been all the greater.  After spending 600 pages learning of the personal sacrifices and manual labor Gandhi put into making India and the world a better place, the assassination would have drawn far more empathy.  But as it stands, the event reads more like the hook for the latest political thriller—a concept that has no place in a biography.

I do not write these criticisms to belittle Ghandi, nor do I doubt Fischer’s regard for the man.  I simply question the over-zealous presentation and giving in to base tactics to draw readership.  Gandhi’s life is interesting enough without the trumped up ideas, leaving me to assume that the six decades since have given other biographers a chance to present the man’s life in more objective terms and with greater reliance on facts than opinion.  Unfortunately, not having read any other biographies of the man, I can only assume this.
All this being said, if the reader doesn’t mind a little verbosity, Fischer does competently present the facts of Gandhi’s life, including the relevant political and historical background behind each of the major events.  For this research, as well as the inspiration Gandhi’s life is capable of instilling in the soul (he lived the categorical imperative!!) regardless of the manner of presentation, the biography remains valuable.
Posted by Jesse at 6:15 PM