Review of City at World's End by Edmond Hamilton 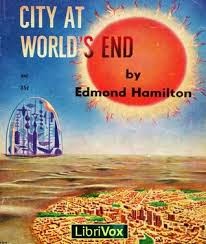 Edmond Hamilton made a name for himself (at a young age) in the 1920s writing pulp science fiction and fantasy.  Captain Future and the Interstellar Patrol some of his most well known pulp creations, he is one of the most well known authors from the era.  So involved with genre, in fact, he met and married Leigh Brackett, another writer of speculative fiction.  Brackett’s writing more understated than his own, her presence brought about a change not only in Hamilton’s life, but also his writing.  It is in City at World’s End (1951) we see her influence.

City at World’s End is, for Hamilton, a mature effort. More in line with works of the time by Wilson Tucker and Ray Bradbury than the previously popular E.E. Smith or Murray Leinster, it utilizes a social experiment to attempt to elaborate on the human condition—ray guns, evil aliens, and space battles left to his pulp creations.  A nuclear explosion picking up Small Town, USA and depositing it millions of years in the future on a barren Earth, it looks at the social reaction to extreme change.  The problem with the experiment is, the maturity is relative.


City at World’s End feels like a novel outline, not a novel.  Character, setting, and background just sketched in, little of the text achieves the full vividness of human color—something that is necessary when creating a human-centric work. And the main fault lies in the fact that the people, their emotions, and places are related as stereotypes rather than unique elements.  The dislocated town actually called Middletown, it never distinguishes itself from the tone of its name, and as a result, neither do its residents.  Compared to Bradbury’s characters and human insight, Hamilton’s feel flat and predictable, and for that the novel looks like a frame waiting for walls and furniture.

Moreover, one must question the initial setup of City at World’s End, that is, the transportation of a small group of humans away from the Earth as we know it to a strange new place.  Given the ultimate tension of the novel is not rooted in the reaction to being torn from home and having to face a new future, rather futuristic super-humans who live on other planets in a federation who appear later in the novel, I have to wonder whether there was any need for the dislocation.  Couldn’t the same thing have been accomplished on Earth as it is, the super-humans instead visiting us, or us discovering something of heir technology?   There is no clear answer to this question, just as there is no clear reason why Hamilton chose to uproot Middletown save science fiction interest.

In the end, City at World’s End is a dry offering that had potential to be something more.  One cannot fault Hamilton for intention, however, only execution; like the sketch of a story never fleshed out, it lacks the complexity one expects of a novel rendering.  Pacing is brisk, however, the characters no more or less relatable (like Arthur C. Clarke’s), and the mystery of discovering new life on the future Earth maintains some degree of suspense. LibraryThing member HellCold puts the novel best:“It's never too deep, never too shallow, and never too slow.” For my money, however, I will stick with Bradbury and Tucker.

I found this doozy of a cover preparing this post...
Posted by Jesse at 7:17 AM