And now back to the show...

After three weeks of semi-relaxing vacation, I return to blog land - and three months of upcoming paternity leave.  (God bless the EU for having less focus on work-work-work and allowing parents to spend months with their newborns rather than weeks.)

I don't watch a lot of films, it's thus that long flights become something of a binge session - if I can stay awake.  On my flights this vacation I was able to catch four films, three of which contained so-called 'speculative elements' (much the same as well water may contain 'trace elements of bacteria').  One of the films was wretched - and seemed to intend itself to be that way.  Two had me thinking - one still and the other not for long, and the last was one of the better science fiction films ever made.  In no particular order, they are: 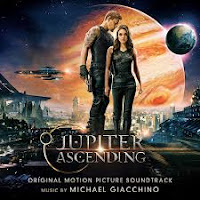 Jupiter Ascending - Gods help us...  John Carter was a Disney production that intended to capitalize on: the superhero market, marketing and special effects, and innocuous pulp elements - romance, action, aliens, and drama - of Burrough's original story.  The cheese flowed, but the film was at least watchable.  Jupiter Ascending is unwatchable.  It's horrendous.  In Burrough's time it might have flown; in today's world it doesn't get off the runway.  This is surprising as Jupiter Ascending has the same background elements of John Carter, - that is, save the originality of Burrough's idea.  And therein lies the difference.  The cheese flowed, and flowed, and flowed, and flowed in predictable fashion. (I called three scenes in a row at one point.)  I winced innumerable times and finished watching only to see how bad it could get.  (Answer: really bad.  The concluding scene may make certain folks vomit.)  The most contrived of plots possible, the most predictable, mundane dialogue I've heard, and a rollerblading space elf combined to make me believe the producers were thinking the market was ready for what may be the most camp presentation the genre has ever seen.  Uggh.

Birdman - Birdman is a mixed bag that I have trouble coming to terms with  regarding overall quality.  The acting is great.  Edward Norton and Michael Keaton really deliver - important, considering one of the main motifs is theater acting vs. what happens in Hollywood.  Likewise the very simple premise (an aging Hollywood actor trying to reinvent himself in a theater) is unraveled unpredictably - save the final scene, which is telegraphed throughout.  And the editing/cinematography is unique.  I can't recall the last time I saw a film which doesn't switch scenes; Birdman is one continuous flow of perspective.  Save the rare view of a black door or empty wall in order to transition, all else is over the shoulder and in the moment.  Birdman falls apart when any scene not directly dealing with Keaton's stage/screen life occurs.  His family are about as stereotypical as they come.  His daughter is so stereotypical, in fact, she undermines rather than supports the realism of Keaton's plight.  Her character has been done a thousand times before, with nothing new added this time around.  The theater critic was likewise much, much larger than life.  And the predictability of the whole storyline - which does make you doubt at the penultimate scene - nevertheless comes through in shiny, happy colors at the end.  Surely there must have been a third route to take...

Ex Machina - There have been a few films made about artificial intelligence, and I would consider Ex Machina to be one of the best.  The ending moves a little too close to thriller/horror for my humanitarian liking, but the core idea of the movie, as uncomplicated as it is, addresses some issues that reflect on our existence in engaging and interesting fashion.  Oscar Isaac brilliant in the "mad scientist" role (in fact "Google master" would be much closer to the truth), the lead actor (name??) a bit over-eager until you understand why and therefore become empathetic, and the AI suitably cool and composed, I was riveted from the beginning how things would be resolved.  I still consider Blade Runner the better AI film, but Ex Machina isn't far behind. 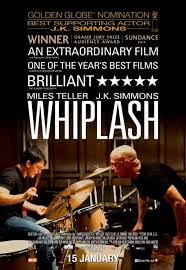 Whiplash - The only purely realist film I watched, it is also the most thought-provoking, or at least the most focused on a contemporary, controversial idea (the value of competition) capable of inducing purposeful discussion of the films I watched. While presenting a classic American hero ending, it simultaneously arrives at the thematic point it had been driving to throughout the film.  Surprisingly, this ending goes against the grain of much modern liberalism to go all the way back to Darwin, which is what perhaps makes the film intriguing.  The story.  It's simple.  A talented drumming student is driven to the point of abuse to become the best drummer he can be.  A brilliant acting performance by J.K. Simmons as the jazz instructor pushes the story perfectly to its tense, multi-layered conclusion.
Posted by Jesse at 9:35 PM