Review of "The Gorgon Field" by Kate Wilhelm 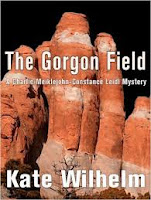 Perky with enthusiasm, a would-be tv writer enters a network television office and heads to the producer’s office.  “I’ve got a pitch you’ve just got to hear.  It’ll be a smash, you can bet on it.”
“I haven’t got a lot of time.  Script problems with Love and Death.  Not enough drama, they’re whispering.  C’mon, make it quick.”
“Ok, ok, I’ll be fast.  Think Charles Stross’ Landry Files meets Connie Willis’ Blackout/All Clear.  Husband-wife detective duo, some playful banter, new mystery each week, the occult and the paranormal abound, and bam—your Monday evening 9:00 slot filled with viewers.”
“Hmm.  We’ve got loads of the detective and mystery stuff, already.  But you’re right, the sheep—ahem, viewers just can’t seem to get enough.  Tell me more about this paranormal-occult thing.”
“Well, in the pilot episode I’ve scripted here, Charlie and Constance, the detective duo, are trading witty shots over morning coffee when a knock sounds at the door. A woman enters with a problem the police refuse to help her with—classic, no?!  Her father, a billionaire living in the mountains of Colorado, is being softened up by a young Mexican man she thinks is trying to sneak away with the family’s inheritance.  She had hired a psychologist to talk to her father, but the man left under strange circumstances and hasn’t been heard from since.  Intrigued by the woman’s story, Charlie and Constance head west.  On tour of the ranch, they come across an odd formation of rocks called Gorgon Field.  Having an aura of their own, Constance feels strangely drawn to the rocks, distant voices calling her.  Back at the ranch, however…”


If it isn’t obvious, I’m not a big fan of mainstream genre. There are exceptions, of course, but Kate Wilhelm’s 1985 novella “The Gorgon Field” is not one.  Set up like a British cozy mystery but with elements of the fantastic, it truly feels like a tv episode of Ghost Hunters or some other such mass entertainment.

The story itself is well-written.  Like Willis, Wilhelm has a nice touch with dialogue and neatly divides her characters along familiar lines—the lines one expects reading such a mystery.  The story is also structured perfectly; suspense is slowly built with every page and the major events transition smoothly.  As a pure specimen of writing, there’s little to pick on.  But that it’s such a threadbare formula with little depth causes the brain to wander while reading—at least mine.  Perhaps I’m a cynical reader of the 21 st century, saturated by such stories.  Maybe in 1985 the novella was more original.  But still I wonder…

If the reader already enjoys such innocent, bite-sized pieces of candy genre, then there’s a strong chance “The Gorgon Field” will interest.  If, however, the reader is looking for material that engages with the ideas it presents in a fashion that transcends the page, they will need to look elsewhere.  I have a feeling this was a bill-payer for Wilhelm, not a story that represents her true writing goals.

“I’m sold.  Leave that script with me, and I’ll have my team of writers polish it up—dumb it down a little more to make sure we get approval from the big boss, you know.  Give your name and number to the secretary on your way out and we’ll be sure to pass along your cut of the profits.”
Posted by Jesse at 9:45 AM