Review of Venus Plus X by Theodore Sturgeon 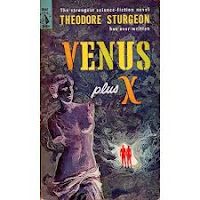 2015 and (part of) the rave in genre is gender busting.  The space opera fare of Ann Leckie’s Anciliary Justice ignores sex in its pronouns.  Kameron Hurley’s ultra-violent samurai-Medieval fantasy The Mirror Empire inverts the standard male-female power relationship and has a unisex warrior.  And Alex Dally MacFarlane is doing her darndest to promote the elimination of binary gender from sf. These novels and views championed as fresh perspectives, sometimes even ground breaking views that are revolutionizing the way we see the world and genre, it’s as if the history of the field never existed.  But the fact the gendered elements of Leckie and Hurley’s novels are like sprinkles on a cake—superficial at best—is all the more concerning.  Does the modern generation of science fiction and fantasy readers truly consider them in-depth examinations of gender and society?

Rewind to 1960 and the rave is how speculative fiction is beginning to transition from the uber-modernism of the Silver Age into concerns more directly relevant to civil rights issues of the day.  With the emergence of writers like Algis Budrys, Robert Sheckley, Joanna Russ, Brian Aldiss, Harlan Ellison, Ursula Le Guin, Philip K. Dick, and others, the concerns of the Cold War, discrimination, sexism, race, and other topics more directly affecting people in the Western world were starting to be addressed.  Enter Theodore Sturgeon’s 1960 Venus Plus X.  About a man visiting a world of humans where the physical notion of male and female does not exist, it puts to clean shame the contemporary conception of what a robust examination of non-gender in fiction can be.


Less a story and more the exploration of a concept, Venus Plus X is the “tale” of Charlie Johns and his time travel to the world of the Lemods, written in Sturgeon’s wonderfully dynamic, chewy prose.  Brought against his will, part of his travels amongst the benevolent people is spent trying to figure out why he was chosen, and what his purpose there is. As he is slowly exposed to more and more elements of Lemod society—its religion, reproductive practice, and outlook on life—he begins to fully understand his situation.  His ultimate reality, however, still comes as a shock.

Throughout Venus Plus X are snippets of contemporary US life.  Though circa 1960, the vignettes nevertheless highlight the simple social issues we still deal with on an everyday basis.  The brand names of products may have changed and the vernacular may be less ‘gee-golly’, but the discussions continue.  Indirectly focused on gender, by the end of the novel, the snippets expand their scope to draw in social cohesion and belief.  As Charlie Johns’ conception of the world slowly morphs out of true into the 20th (and mostly still 21st) century contemporary perception of society and cultural norms, so too does the reader’s perception of the snippets.  Sturgeon playing deep head games, the reader who assumes the utopian scenario laid out in detail is to be bowed down to is in for a surprise.

Though gender appears the main concept under exploration for the majority of the novel, it is slowly subsumed into a larger idea, perhaps even question: how to achieve a sustainable human future?  The Cold War well under way in 1960, one can almost feel Sturgeon probing at the practical application of socialist and democratic theory.  The punch of ultimate judgment left hanging, the novel lingers in the mind for the interesting concepts it raises regarding the evolution of mankind as well as what is best for mankind.  Less a sense of “Ahh, that was a satisfying story.  Let’s see what’s next on the TBR pile”, the reader drifts into rumination.

In the end, Venus Plus X is classical science fiction—not strictly in the temporal sense, rather for its ability to make the reader stop, think, and perhaps reevaluate their view of the world.  Gender and human purpose the key themes, Sturgeon highlights our foibles, creates a grand vision of how it might be, then deconstructs it with reality, leaving the reader to mull over in their mind what indeed they desire for themselves, those around them, and the future of mankind.  Ursula Le Guin’s The Left Hand of Darkness a more balanced mix of ideas and storytelling, Venus Plus X nevertheless possesses a strong conceptual drive that allows it to rise to equal height, questions and ideas floating in the mind well after.
Posted by Jesse at 9:11 PM