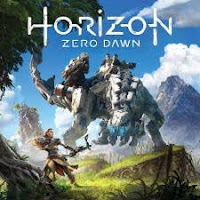 While eating breakfast or late in the evening before sleep, I will sometimes watch video game reviews and trailers.  I like to see what’s out there to play, or what’s coming.  But after a while, it all starts to blend together.  Fall Cry, Battle Duty, Destiny Effect, Elder Divinity, Last Walking Dead—there seems an endless progression of scenarios intended to maximize the potential for shooting and stabbing in a world rendered unique by some premise or another.  With more three decades of video games in the rearview, unique has become relative, and coming up with a quality, original IP is very difficult.  But not impossible.  Grounding itself in fundamental gameplay, ensuring the little details are correct, and building off said three decades of wisdom, Guerilla Games’ 2017 Horizon: Zero Dawn delivers a unique world and a quality, enjoyable experience.

But watching the trailers for H:ZD, I initially had doubts.  ‘Fighting robot dinosaurs in a primitive world, how cheesy’ was my first thought.  But after watching some of the gameplay, noticing some of the subtle details and quality of the graphics, learning the storyline was actually post-apocalyptic rather than old-world primitive, and seeing the potential of the combat system, I was intrigued.  When early reviews from across the gaming community all came back positive, I thought why not?  Having now completed the game, why not indeed?

At the outset of H:ZD, it is the far-future and Earth is in the process of recovering from an apocalypse which nearly wiped out humanity.  What’s left has divided itself into new communities and tribes, most of whom scavenge among the ruins for sustenance, discovering things of old and putting them to new use (including fashion).  Aloy is a young girl born into the Nora tribe, but for reasons initially unknown is labelled an outcast and as a result lives outside the borders of the tribe. Raised by a kind, helpful man named Rost, Aloy develops her skills as a hunter with the hope of competing in the trials, the winners of which are given official status in the tribe.  Little does Aloy know how useful her skills as hunter will prove to be as a shadow stretches itself across the land, and the fate of all tribes goes dark.

H:ZD is, in most ways, the classic Campbellian hero’s story; Aloy is cast out of her tribe, builds fame and power in exile, and returns to save the tribe from destruction.  It is the archetypal template on which a huge number of stories are based.  Where Guerilla Games make the story their own is in the details.  The robot machines, which were at least partially responsible for the destruction of civilization, are returning in not only larger numbers, but often in agro, corrupted fashion, going on rampages that kill the innocent.  Aloy discovering in the early going that they are not acting on their own, she begins to investigate, and of course, must take down her fair share of the mechanical beasts on her way to uncovering the entire mystery.

Roughly twenty different types of robotic dinosaurs in all, each is specifically designed.  Something like Lego, the machines consist of parts that can be specifically targeted by Aloy and her bow.  Likewise, each part is susceptible to different types of ammunition, from shock to freeze, fire to explosive tip arrows, which means taking each machine down is more an exercise in surgery than chaotic blasting (aka mashing the square button).  Accordingly, the inventory of weapons available to Aloy covers the same spectrum, whether it be the straight forward selection of bows with different types of arrows, or the slingshot which launches different types of explosive rounds, the tripcaster which allows the player to lay tripwires as traps, or the ropecaster which allows the player to tie the machines to the ground temporarily, limiting movement for the killing blow.  On top of this there is a selection of potions to craft and clothing to purchase which interact with and deflect the differing elements in the game world.  While not the same level of depth as Witcher 3 or Elder Scrolls: Skyrim, there is more than enough variety to keep gameplay very dynamic.   In fact, those who found Witcher 3 or Elder Scrolls too complex will likely feel the weapons and inventory possibilities of H:ZD are a welcome streamlining.

Like many rpgs and open world games before it, H:ZD uses a main quest and side quests as the driving motivator for gameplay.  That being said, it’s just as easy for the player to ignore the quests, at least the side quests, and go off exploring.  By doing so, they will find a myriad of interesting settings, enemies, and things waiting to be discovered.  The game set in what should be considered a condensed version of Arizona, Utah, and Colorado, there are dry, dusty deserts, snowy mountains, red rock plains, and forested hills to traverse, all littered with enemies and supplementary gameplay that require no quest initiative to engage.

In terms of this supplementary material, Guerilla Games has included a veritable wealth.  There are numerous hunting trials that can be passed to gain access to locked weapons.  There are underground facilities (called cauldrons) which act as both platform puzzles and bosses: the player must find a path through an underground labyrinth that feels more like Mass Effect than H:ZD, the prize awaiting at the end a difficult machine baddie needing to be taken down.  There are also many different types of relics and metal flowers to be collected and secret vantage points the player must find hidden paths to reach.  And this is all not to mention the zip lines, mountain traverses, rock hand holds, and other interesting ways and means to move in, through, and around the main and side storylines.

Many players will not notice, but Guerilla Games goes against the classic hero-story grain with character and cultural presentation.  At times heavy-handed and at others more subtle, there is a benevolent matriarchy vs. malevolent patriarchy dichotomy to the social set up, the lead character is a “strong female”, and the peoples encountered are of all colors and sizes.  Add to this the fact that enemies are most often machines (i.e. an entity one can kill without ethical quandaries) and you’ve got yourself a recipe for a more politically sensitive game.  Contemporary socio-political ideals seeping ever deeper, H:ZD is one example where nothing is sacrificed in gameplay yet an open program is still delivered.  Kudos to Guerilla Games for doing so, even if it is at times overt.

In the end, Horizon: Zero Dawn is satisfying from story to combat, setting to technical details.  I finished with more than 65 hours of gameplay, but there was a fair amount of content remaining.  I’m guessing the player would need more than 100 hours to do and see everything.  The game does nothing new in terms of mechanics, storytelling, or combat.  Fast travel, weapon wheels, bar-scrolling HUD, crafting system, resource collection, stealth combat—these and the other aspects have all appeared in games before.  But these aspects are all done very well, which is a credit to Guerrilla Games for taking time in the QC process to ensure they released as good a game as possible.  Laudably progressive in its politics on top of this, it deserves mention among game of the year contenders, if not the GOTY.  (Nier: Automata is still sitting on my shelf waiting to be played…)
Posted by Jesse at 9:46 AM