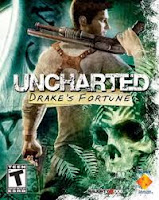 Whether it be koopa troopas (the duck-turtle things from Super Mario Brothers) or the endless robotic hordes of Contra, darknuts (red and blue varieties) from Legend of Zelda or the innocent looking crab things spitting glowing death balls from Sonic the Hedgehog, one constant in video gaming is the endless parade of enemies who. all. look. exactly. the. same.  Better to kill a faceless enemy than one with a wife and three children (George, Sophie, and Martina—as cute as can be).  Thus, to say video games are xenophobic (in terms of content, I mean) would be an understatement.  Having recently completed Naughty Dog’s 2007 action/adventure game Uncharted: Drake’s Fortune, I can only say the more things change, the more they remain the same.  Far advanced in graphics, music, story and otherwise beyond the days of Mario Bros., Contra, etc., that parade push of faceless enemies nevertheless continues, en force…

Uncharted opens with Nathan Drake (archeologist/explorer who happens to be good with a gun) dredging up the coffin of his long lost ancestor Sir Francis Drake off the coast of Panama.  The coffin is empty, but it does contain a secret book with enigmatic clues where he hid his treasure before dying (natch).  Pirates attack, and soon enough Drake, his right-hand man Sully, and the feisty reporter Elena are tracking through the jungles of a mysterious island, seeking an idol purportedly made of pure gold as enemies attack from all sides.

Lethal Weapon meets Indiana Jones, Uncharted is a very light-hearted, linear affair with buddy-buddy dialogue, light romance, endless Hollywood style shoot ‘em ups, and a storyline that just barely staples it all together.  Beyond the cover-based combat, players will at times be able to take control of a gun strapped to a moving jeep and a jet ski, which does something to break up the near endless cycle of: blast baddies, wall climbing puzzle, blast baddies, wall climbing puzzle, blast baddies… Naughty Dog have done a good job with the cut scenes.  More than just brief snatches as in video games of old, Uncharted’s occupy enough of the game’s narrative to warrant a mention, and do their job in the stapling.

In video game terms, Uncharted is a faster paced version of the original Tomb Raider or Resident Evil games on Playstation 1 but with less complex puzzles.  There is no: find object C to put in slot 5 which gives you access to object B needed for gate 2, etc.  The puzzles in Uncharted are more about finding a path through or along buildings, walls, towers, and wreckage; find object A needed for slot 1, no further iterations.  Naturally, the simplicity has its limitations, meaning this is not a game one rushes to play again immediately after completing.  After killing the eight million and first baddie and the credits roll, it’s time for a break.

The game has some issues.  It’s a bit funny to exert a huge amount of effort, hopping and leaping from ledge to ledge, climbing the outer wall of a tower, and jumping between swinging vines to find a hidden key or other relic needed to open a door or gate, only to emerge on the other side of said door or gate to find more of the same enemies waiting for you, guns blasting.  How did they get through the door without the magical key, I ask?  Collecting the in-game treasures is also a bit of a joke.  Nothing useful laying around the Uncharted landscape save guns and ammo, not to mention all the set pieces are linear, treasure hunting is nothing more than looking in shadowy corners to find items which have zero effect on the gameplay.  In fact, it feels like a desperate bid by developers to add a layer of gameplay that wasn’t really needed to begin with.  There are further issues with the duck and cover system.  Pushing O next to a doorframe didn’t always result in Drake taking cover behind the doorframe.  Sometimes he would instead duck below a nearby parapet that left him exposed to enemy fire from the side, meaning the engine hadn’t been aligned properly to the environment.  Another combat frustration that occurred regularly was pushing the button to switch shoulders when sighting the gun only for nothing to happen, the crosshairs still squarely pegging the stone pillar in front of your face.

Enjoyable but forgettable, Uncharted: Drake’s Fortune delivers fast action in the moment but fails to achieve anything long term like the other big Naughty Dog title The Last of Us, which, to be fair, I don’t think was the developer’s aim to begin with, but does leave a very mediocre game.  It is, however, a solid shoot ‘em up that helps and hurts itself by keeping things simple in terms of in-game choices and gameplay mechanics, even as it hearkens back to the old days of video games where faceless hordes of enemies just keep pouring in, pouring in, pouring in, and you keep blasting away.  The more things change, the more they remain the same.
Posted by Jesse at 10:23 AM