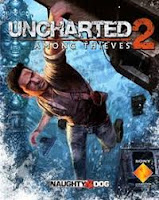 Uncharted: Drake Fortune, the first game in the Nathan Drake series, was an average shoot ‘em up with mild bits of puzzle that was enjoyable in the moment but didn’t achieve a storyline or complex enough gameplay worth additional playthroughs.  A repetitive cycle of shooting up a hundred baddies than finding your way out of the area so you can shoot up more baddies, any sequel held a lot of potential for adding variety and depth to gameplay.   With Uncharted 2: Among Thieves, ask and ye shall receive (just not a bucketload).

A notably better game than Uncharted: Drake’s Fortune, Among Thieves goes further down the Hollywood road.  It remains a repetitive cycle of platforming and gunfighting, but Among Thieves presents these elements with better visuals, more complex puzzles, and better cut scenes to create an experience closer to the Tom Cruise/Bruce Wills/Sly Stallone/   (fill-in-your-favorite-action-hero-here)    movie developers were aiming at.  There are still numerous, sometimes overlong scenes with shoot ‘em ups and platforming, but overall the level of idiosyncrasy increased significantly.  It’s still a juvenile game with gaping plot holes and ludonarrative dissonance, but it’s now slightly easier to ignore this factor.

The most noticeable of these improvements over Drake’s Fortune is perhaps cinematics (the puzzles take a close second).  The cut scenes richer and lengthier, they do a significantly better job pacing the shoot outs/puzzle solving, as well as providing a grander sense of overarching story to invest the player in the game.  This story still features gaping holes that detract the immersion, but it is at least easier to suspend disbelief.  Moreover, In Drake’s Fortune it sometimes felt like the game was pushing the player, whereas in Among Thieves it feels as the opposite: the player is in control (even though, as we all know in the back of our heads, everything is scripted).  And, let’s be honest, it’s in the big screen fireworks where the Uncharted series makes its name.

In the end, Uncharted: Among Thieves is a notable improvement on Drake’s Fortune, and brings the Uncharted series to a higher level.  Naughty Dog cleaning up some technical issues and adding a lot of content in terms of cut scenes, more sophisticated puzzles, and set pieces with their own rules, the result is an experience that feels broader and more dynamic even if the same basic formula applies.  The graphics more colorful and vivid, gunning down baddies and solving puzzles in the temples of Tibet takes on an aspect that may just be the definition of teenage fun.  Of the three original Uncharted games, Drake’s Fortune, Among Thieves, and Drake’s Deception, this is the tightest package for as silly as the overall premise is presented.
Posted by Jesse at 7:30 AM