Non-fiction: Review of SuperBetter: The Power of Living Gamefully by Jane McGonigal 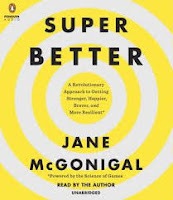 Compared to literature, film, television, and the other forms of media we regularly consume, video games are the new kids on the block.  But they have taken the block by storm.  Their popularity only increasing as each generation’s thumbs develop left and right brain coordination, they are also the most lucrative form of media in terms of profits.  Despite the rise in popularity, misconceptions about video games persist.  They cause violence.  They isolate.  They addict.  And so on.  What real-world research has to say about video gaming is something entirely different, however.  Naturally, as with too much of anything, there can be problems, but as a whole the number of positives outweighs the negatives.  The world, in fact, is round.  In SuperBetter: The Power of Living Gamefully (2016), Jane McGonigal takes advantage of the misconceptions by creating her own program: how “gaming” can improve our lives—without the need for a television or controller.

Aimed at people who are dealing with things from PTSD to procrastination, anxiety to loss, stress to motivational issues, depression to irrational fears, and a host of other problems, SuperBetter describes McGonigal’s program for tackling such issues in a manner heavily influenced by the science of games and cognitive behavior therapy.  The program possible to be approached individually, with friends, or with professional help, McGonigal takes the conclusions, empirical and cognitive, from game research and implements them in a new form.


SuperBetter perpetually fooled me into believing it was an actual video game given the verbiage McGonigal uses.  An important parallel, one of the biggest ideas in SuperBetter is the change in perception we need to tackle our biggest issues and challenges.  People generally relish the fun of putting together a puzzle or solving a problem in a game but rarely relish the challenge of getting better at public speaking or confronting loss.  With a few practical tools and changes in verbiage, McGonigal shows how these and other such issues can be tackled gamefully—specific pain points can be treated as “bad guys”, feel goods can be treated as “power-ups” to help balance positive and negatives, our existing talents can be “super powers”, and friends can be involved as “extra lives” in our “games” for support.  I personally do not suffer from any mental or social issues, but the book nevertheless made a strong impression how simple changes in nomenclature can turn situations previously perceived as threats or dangers into welcome challenges or opportunities, which is something anyone can appreciate.  (The framework McGonigal provides beyond this is far more in-depth.)

The other element that constantly impressed me about SuperBetter was the amount of research that backed up McGonigal’s program, not to mention the positives of gaming in general.  While I never was a person who thought video games cause violence, isolate players, etc., I also never believed they could be a force for good, more low brow entertainment like blockbuster Hollywood films or pulp science fiction.  I was wrong.  The research in SuperBetter is fascinating (and is the reason to read this book if you do not have need of mental help).  A simple example: researchers wanted to improve perceptions young have of the old, so they created two sample groups to study.  One group consisted of teens and elderly who had never met and were given free time to eat, watch movies, and go for walks together.  A second group of teens and elderly under the same circumstances were given video games to play cooperatively.  In both groups the perceptions the young had of their older counterparts had improved by the completion of the study.  The difference was that, in the group which played video games the young’s perception extended beyond the elderly they played games with to all elderly.  In short, gaming cooperatively enhanced their sense of empathy and compassion beyond the individual to the social level.  Along with numerous case studies of people who applied McGonigal’s program, there is a lot of additional research described in SuperBetter.

In the end, SuperBetter is an extremely interesting book for the amount interesting research into gaming it cites.  Far more geared toward McGonigal’s program SuperBetter and its potential to make key life improvements for people, however, it foremost comes recommended to people looking to approach their personal issues, big and large, from a new perspective and within a new framework.  Video games just the backdrop, the program itself is much broader and more practical and personal in scope.  If reviews can be trusted (can they?), it seems McGonigal’s earlier book Reailty is Broken is intended to be focused more on the science behind gaming, not her cognitive therapy program.  Regardless, gaming was always just a hobby to me; I now look at it differently.
Posted by Jesse at 8:16 AM